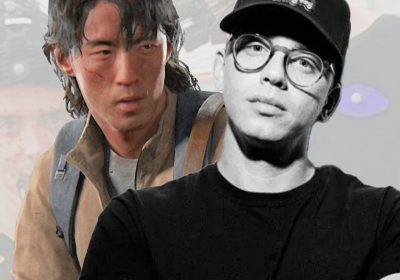 Logic is a big fan of The Last of Us. The rapper, grammy-award winner, Twitch streamer and YouTuber recently uploaded a video where he detailed how he managed to get into auditions for Naughty Dog's classic and even landed a part.

The pretext for the video was that he was asked by a fan what his favourite video game story was (it's The Last Of Us, surprise surprise), which sets Logic on his story. While "conned" is kind of overdoing it, Logic certainly parlayed his connections into setting it all up (via Pushsquare).

Logic got to know the voice acting community through Steve Blum (Cowboy Bebop, Star Wars Rebels) and via that connection got to know Ashley Johnson who plays Ellie in The Last of Us games. They became friends and Logic got invited to visit the Naughty Dog offices where he got to play Uncharted 4 before it was released. There he met Naughty Dog honcho Neil Druckmann and Logic invited him for lunch (so he could tell him "why I love his games".

During their lunch Logic also tells Druckmann, "I'd play a trash can in your game", and from there he got to audition for a part in The Last of Us Part 2 which was in development at the time. Logic read for the part of Jesse, Dina's ex-boyfriend, but didn't get it, saying that he played it "a little timid". In any case he didn't get the part.

But, a few years later, Naughty Dog gets back in touch with him and he's offered the role of Bobbie Hall, a Rattler who pops up in the last section of the game. For Logic it seems one of the highlights of his life the way he talks about it, but it does sound pretty cool, to be involved in the production of such a big game, especially one he's such a huge fan of (he says he's beaten the first game 15 times).

So it's worth a watch to hear Logic talk about it with his enthusiasm shining through and for a little insight into the character and personality of Neil Druckmann.