After Dominaria United’s devastating betrayals and heart-wrenching deaths, Magic: The Gathering really needed to do something to lighten the mood. After many false starts, including a glue factory going bust resulting in a delay from its original April 1 release date, we have the happy interlude we desperately needed: Unfinity.

Set in Myra The Magnificent's Intergalactic Astrotorium of Fun, Unfinity takes us to the Un-iverse’s biggest and best outer space funfair in the latest in a long line of zany, often impractical, always hilarious parody “Un-sets”. You can’t have a funfair without the rides, though, and our preview card will help introduce one of Unfinity’s newest mechanics: Attractions.

Roll Up, Roll Up 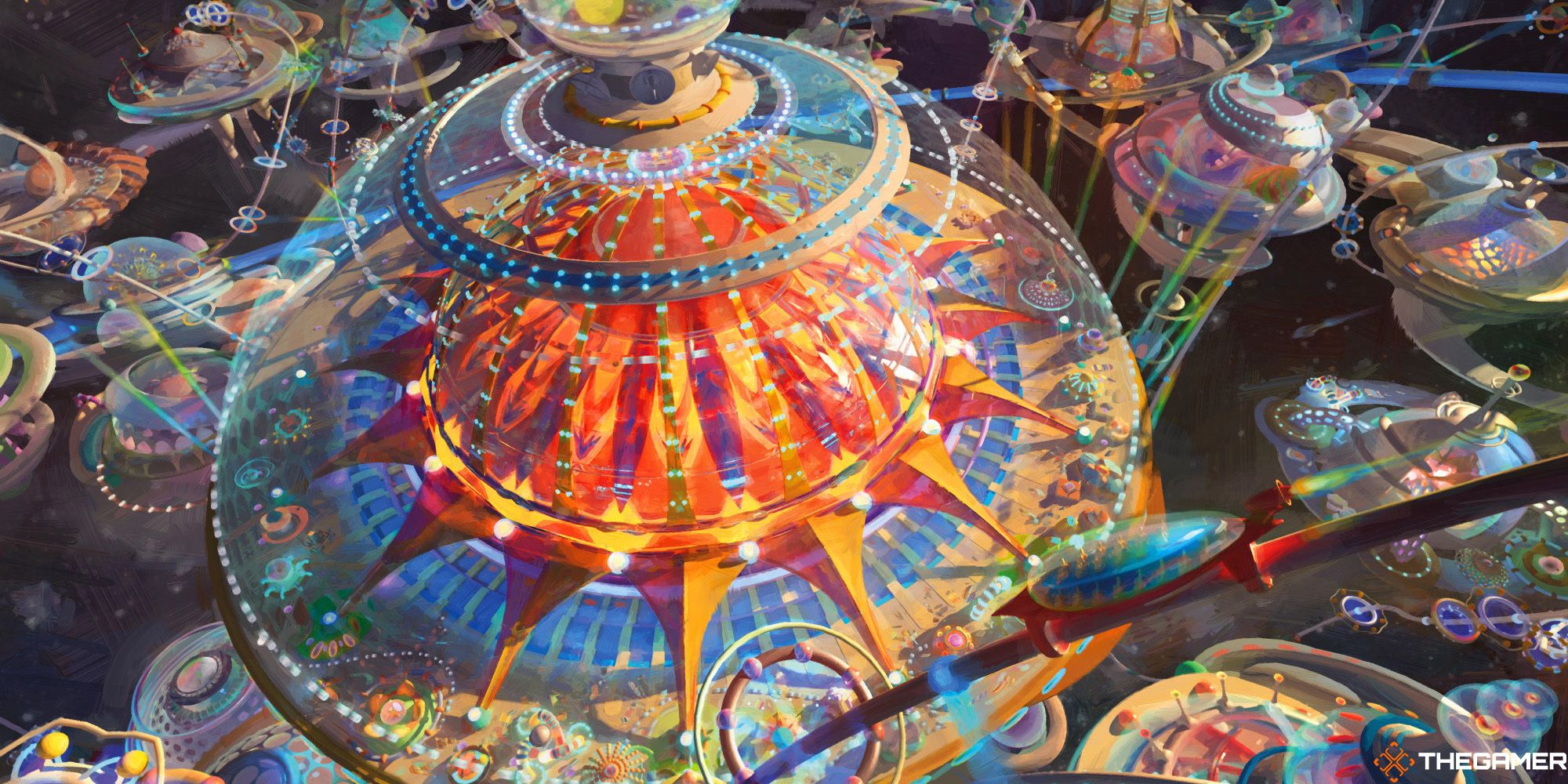 Attractions are one of two new card types debuting in Unfinity, alongside the previously-revealed stickers. While they’re a new type of artifact, which any Affinity player will love, Attractions don’t go into your library. They don’t even use the standard MTG card backing.

Instead, like Unstable’s Contraptions or your sideboard, Attractions have their own specific deck. When drafting, you’ll need at least three Attractions to make an Attraction deck, whereas in Constructed you’ll need a ten-card singleton deck instead, meaning every card has to have a different name. 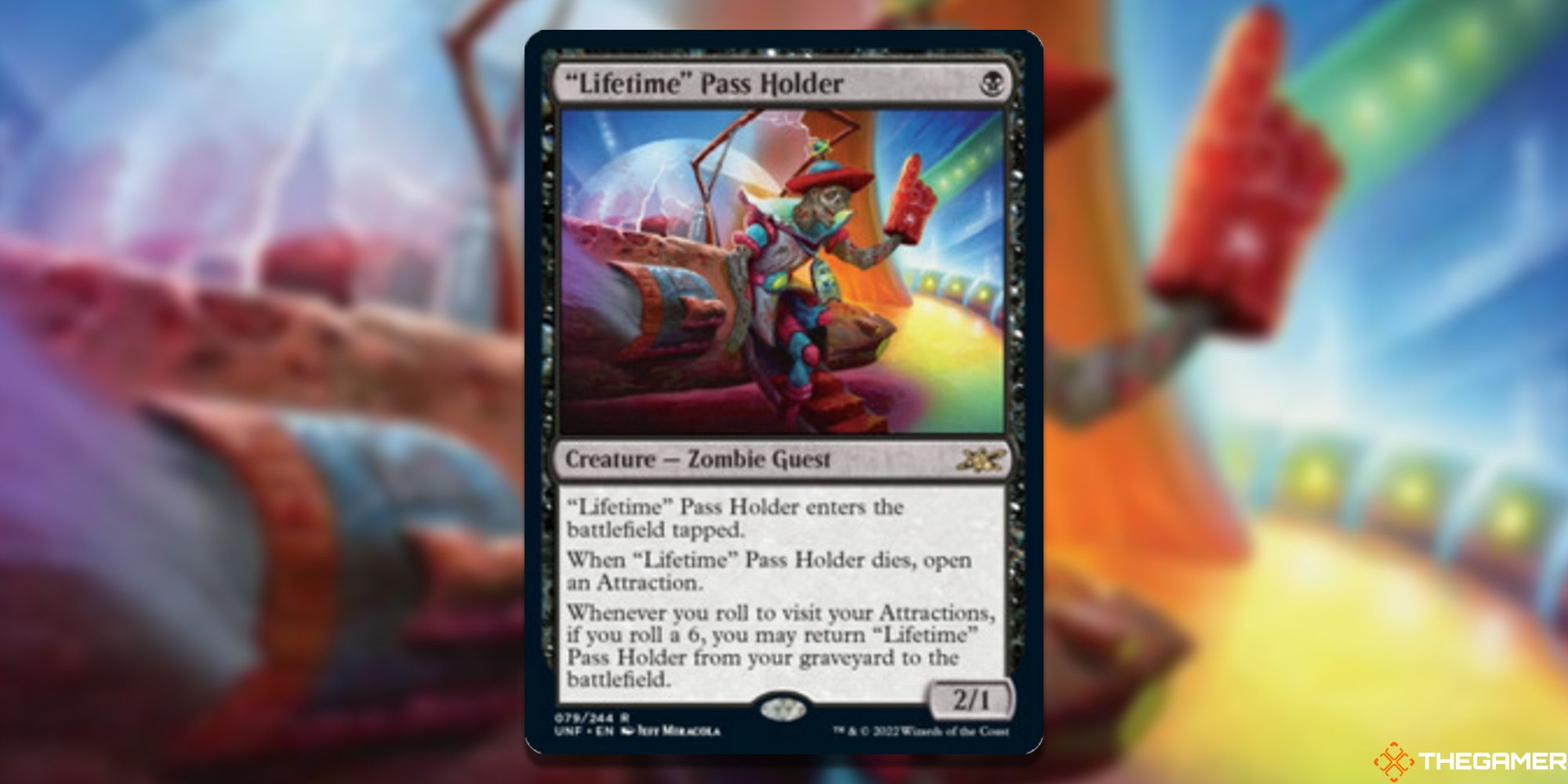 When a card tells you to ‘open an Attraction’, such as “Lifetime” Pass Holder, you take the top card of your Attraction deck and put it onto the battlefield. From there, nothing else happens until the beginning of your next main phase, at which point you’ll roll a six-sided dice.

Most Attractions have more than one version of their card, with each one having both a different set of lit-up numbers and different flavour text. This will allow you to fill your Attraction deck with enough cards to have something triggering every turn you don’t roll a one, which will make these a very powerful source of value. 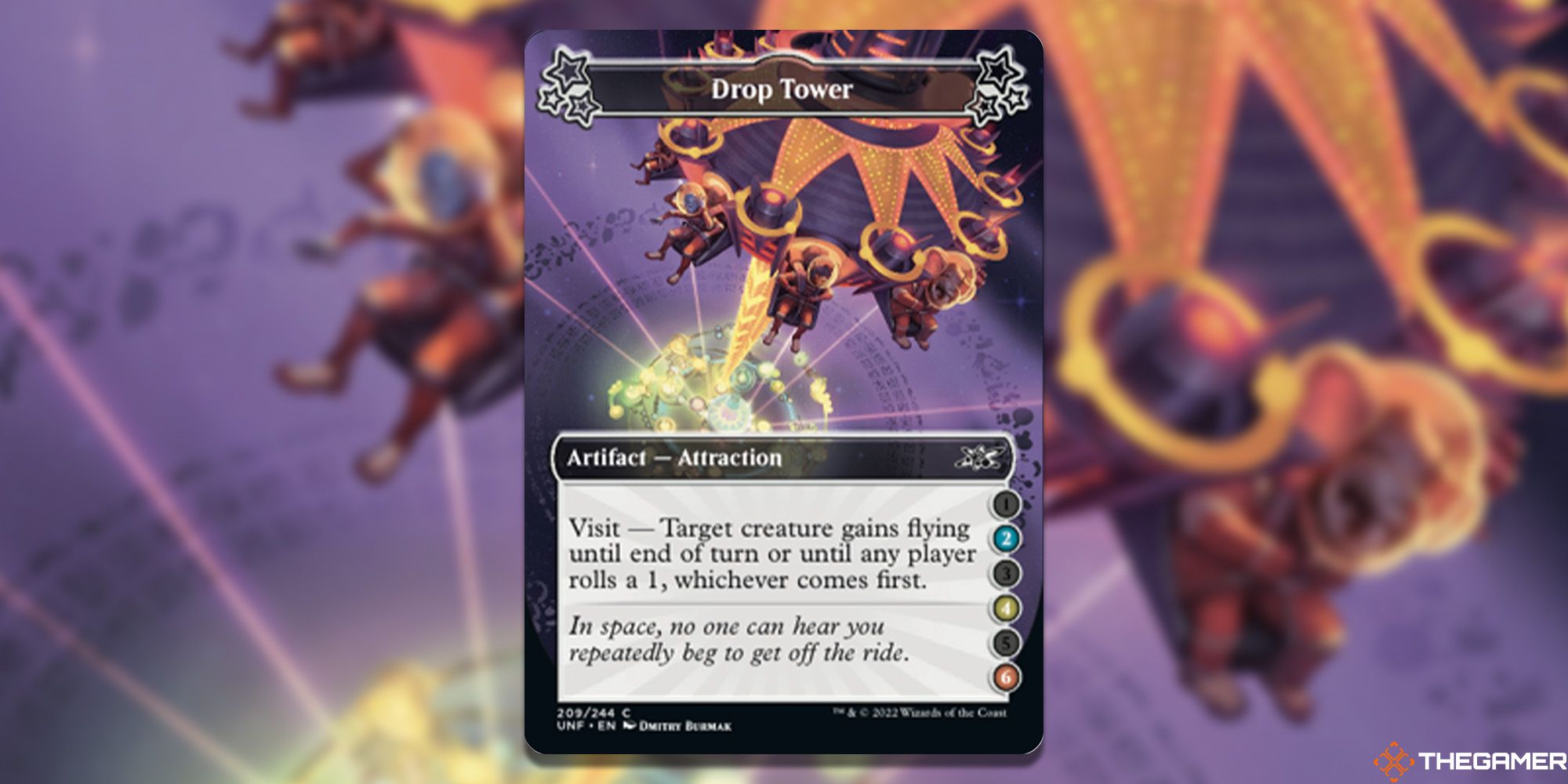 Visit – Target creature gains flying until end of turn or until any player rolls a one, whichever comes first.

Our preview card for Unfinity is Drop Tower, a common-rarity Attraction that helps perfectly highlight how this new mechanic works. Giving a creature flying is particularly good in draft to slip a big, meaty hitter through with some surprise evasion, and having it be a repeatable effect (if you’re able to visit it each turn) could be a game-winner for you.

Drop Tower has not one, but six different versions, each with three of the numbers lit up. This means every turn you’ll effectively have a 50 percent chance of triggering it. Of course, in Draft you can grab as many of these as you can get, but in Constructed you’ll only be allowed one in your Attraction deck. 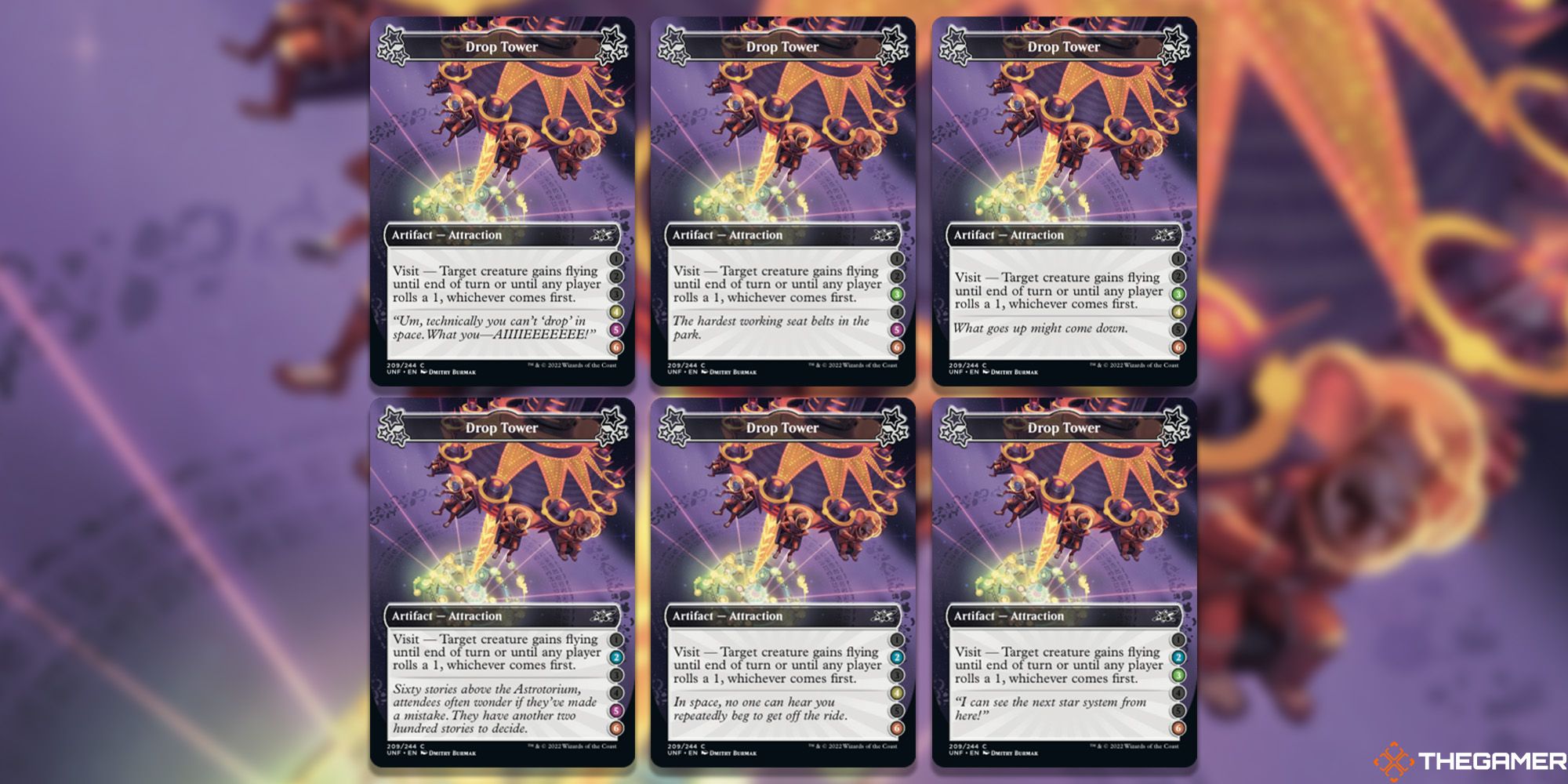 While the value of giving a creature flying is immediately apparent, what many people may forget is that Unfinity is a set that is built around rolling dice. With so many ways of profiting off dice rolls, such as The Space Family Goblinson and Goblin Blastronauts, having a guaranteed way to roll at the start of each of your main phases could wind up being a bigger driver of your deck than necessarily hitting the right numbers. 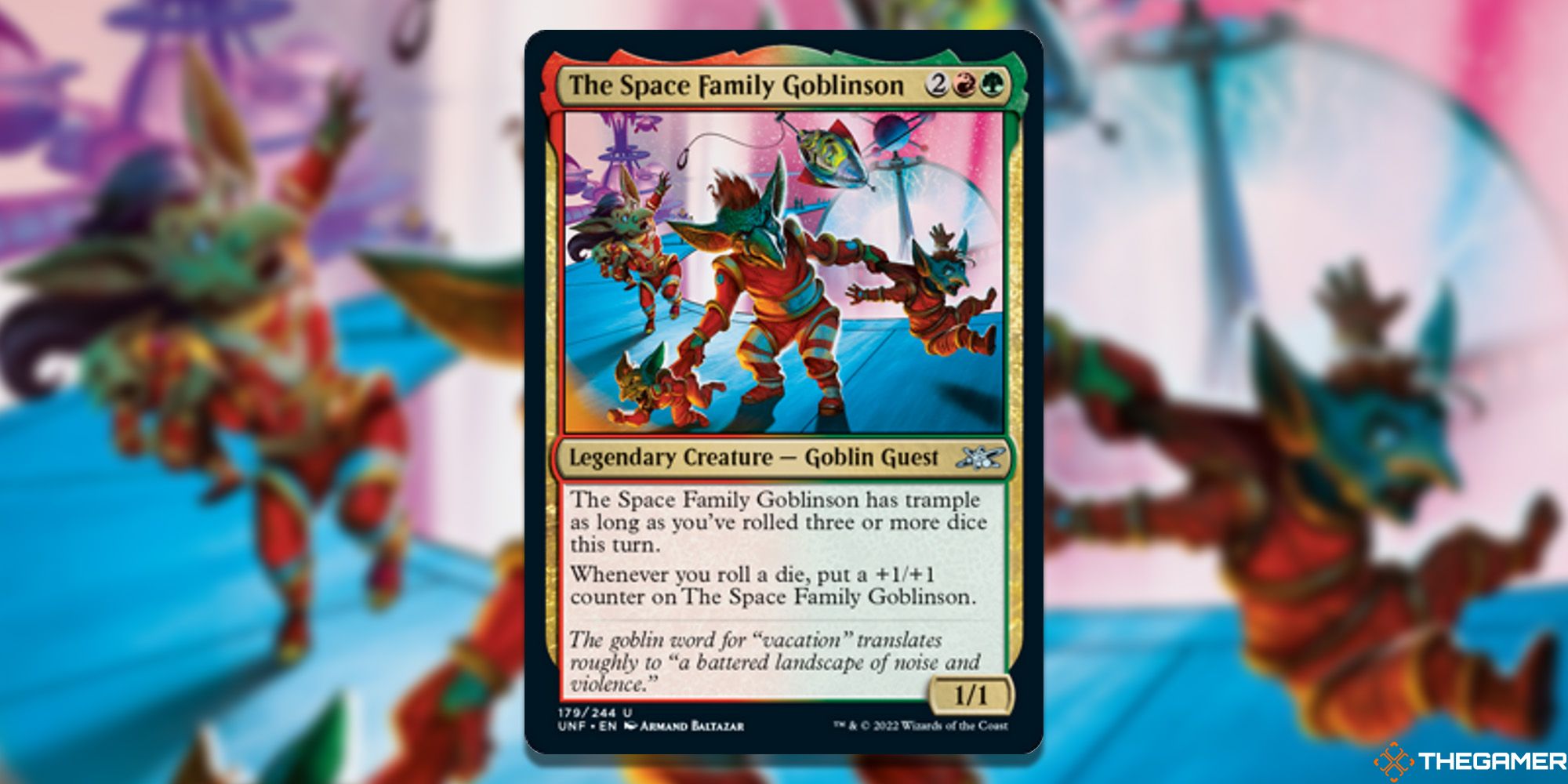 One of the big things about Unfinity is that, unlike previous Un-sets which were kept in their own, sealed off bubble of legality, many cards here will be legal in Commander, Vintage, and Legacy as well. Any card that isn’t for play in mainstream Magic is denoted with an acorn stamp – something Drop Tower lacks. That means it will be legal in not just Commander, Vintage, and Legacy, but also Pauper as it is a common rarity card.

Drop Tower itself isn’t the splashiest card to have ever been released, but its implications don’t let the simple rules text throw you off. This, and other Attractions, could be a big deal when Unfinity launches on October 7.