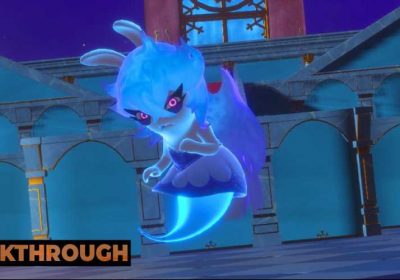 Mario + Rabbids: Sparks Of Hope is a sprawling epic adventure taking place in a galaxy not too far away at all. With your Heroes and their helpful Spark companions in tow, it's up to you to rid the solar system of the meddlesome Cursa and her Darkmess Tentacles.

The second planet you'll be jetting off to is the icy expanse of Pristine Peaks. This wintry wonderland has a bitter chill on the wind – and it's not just the snow. Here are the main missions you'll face before rescuing Rabbid Rosalina.

Main Mission: The Cold Mouth Of The Mountain 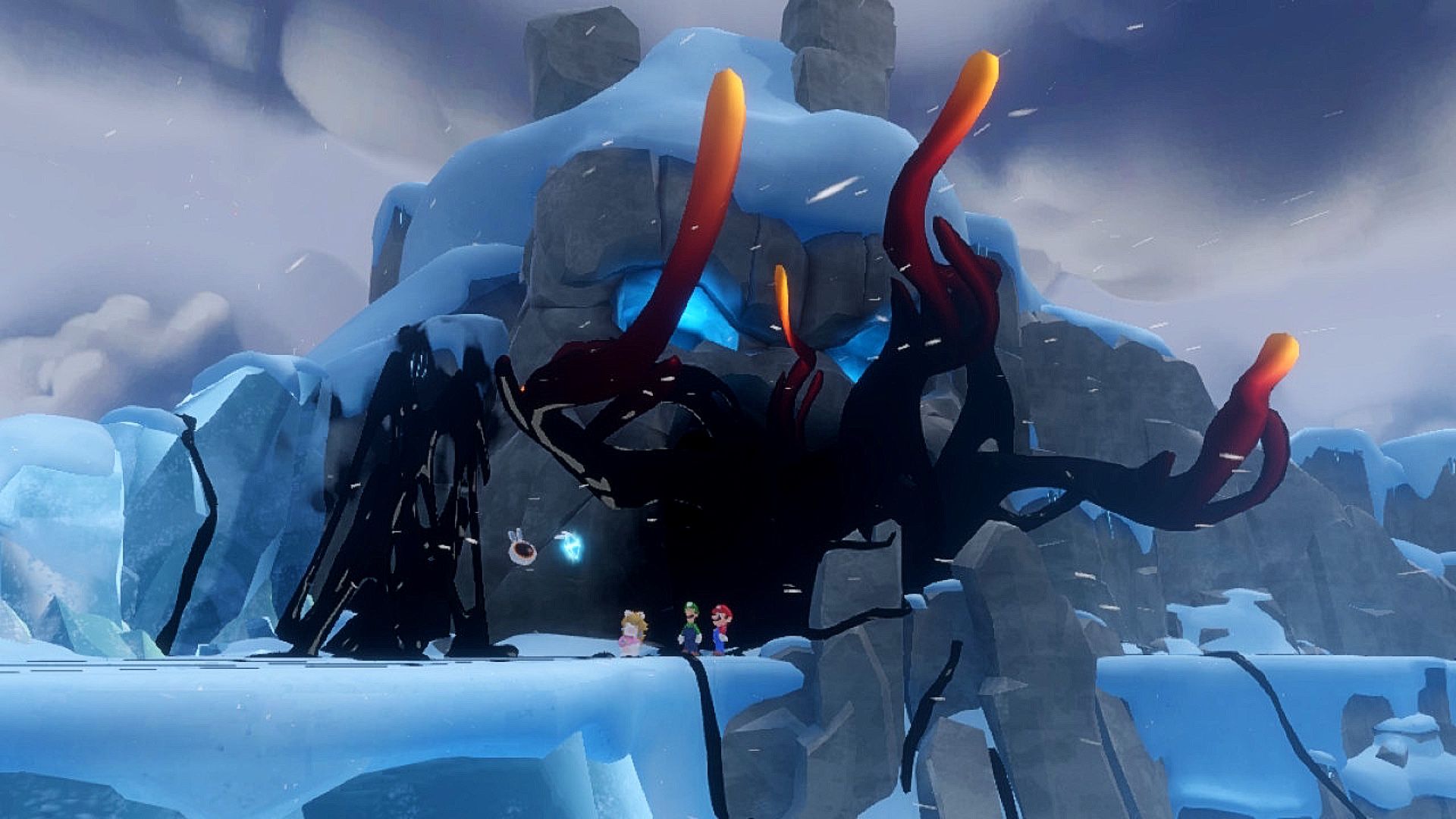 After giving the nearby tree a quick shake and adding Ethering to your Sparks roster, keep following the winding pathways up the mountain.

You'll be facing a number of battles on your way up, including run-ins with plenty of Flamin' Stooges, Lone Wolves, and Frozen Wildfangs. It would be a good idea to keep checking which enemies you'll be up against by scanning your foes with the Tacti-cam before beginning a new battle as you may need to switch out your Sparks to give yourself a combat boost.

Remember that Frozen Wildfangs are resistant to Frostbite attacks, but you will be too if you have Cryoblide equipped. For a greater offense buff, use Pyrogeddon or Pyrostar to deal some hefty Burn damage and send them running.

As you climb higher, the enemies will become stronger. You'll also meet the lumbering Squashers, piglike creatures with a huge rectangle strapped to their backs that they use to perform a devastating bodyslam attack.

These can whittle down your Heroes' health bars quickly, so be sure to bring Toxiquake out onto the field and send some Ooze attacks their way to help you clear them quickly. 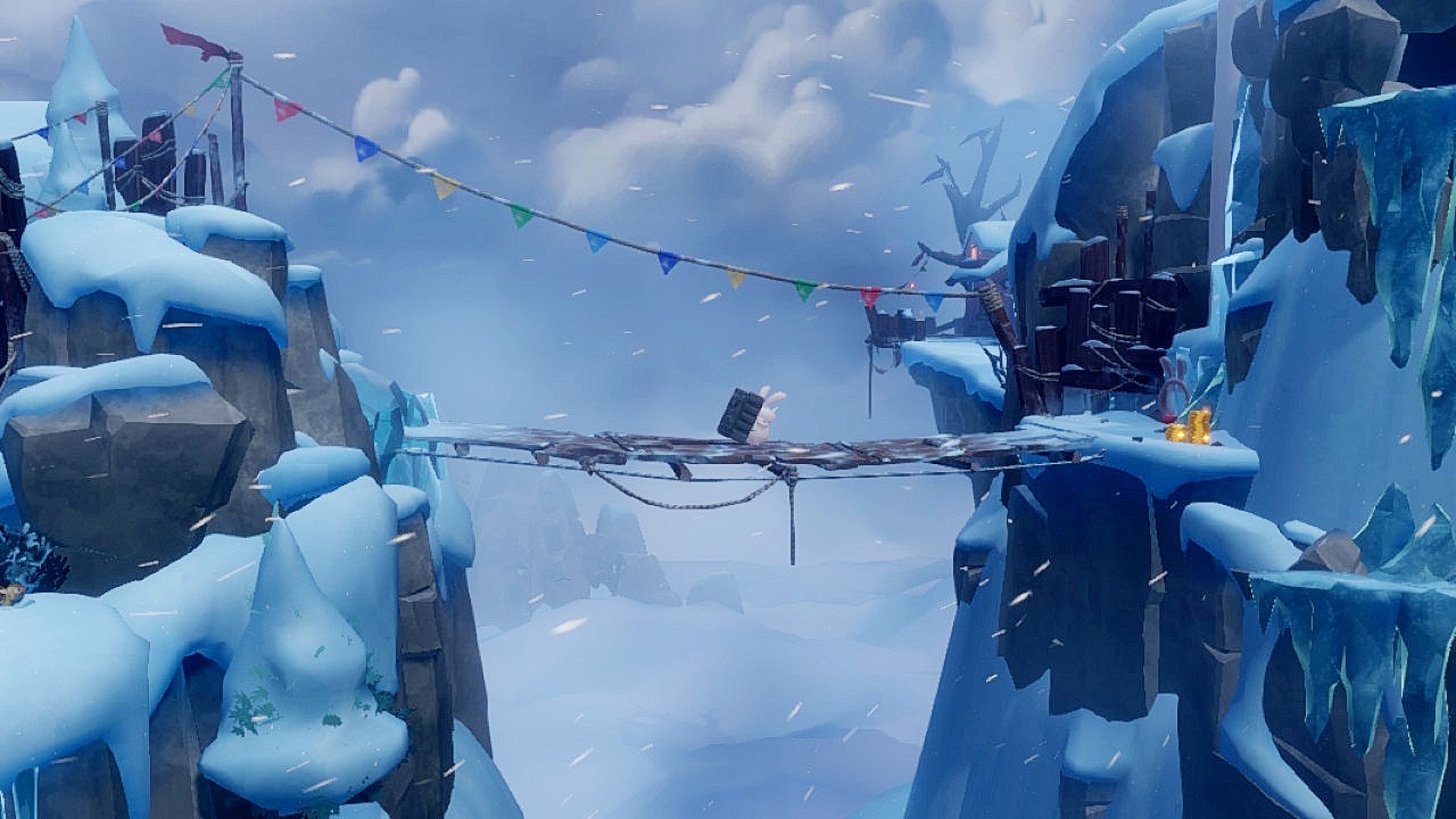 Once you reach the final battle arena, you'll have to destroy two Darkmess Puddles using the help of Bom-ombs and air tunnels. The best tactic for this battle is to send a ranged attacker – such as Luigi or Mario – down to the Darkmess-covered mask, and get your other Heroes to send Bom-ombs down by using the buttons placed around the arena to activate each tunnel.

It only takes one Bom-omb to take the mask out, but the map can be rather sprawling. Be prepared to spend a good deal of time on this mission, as enemies will spawn in at random points – so don't worry if you need to use one of the Bom-ombs to clear some Lone Wolves! 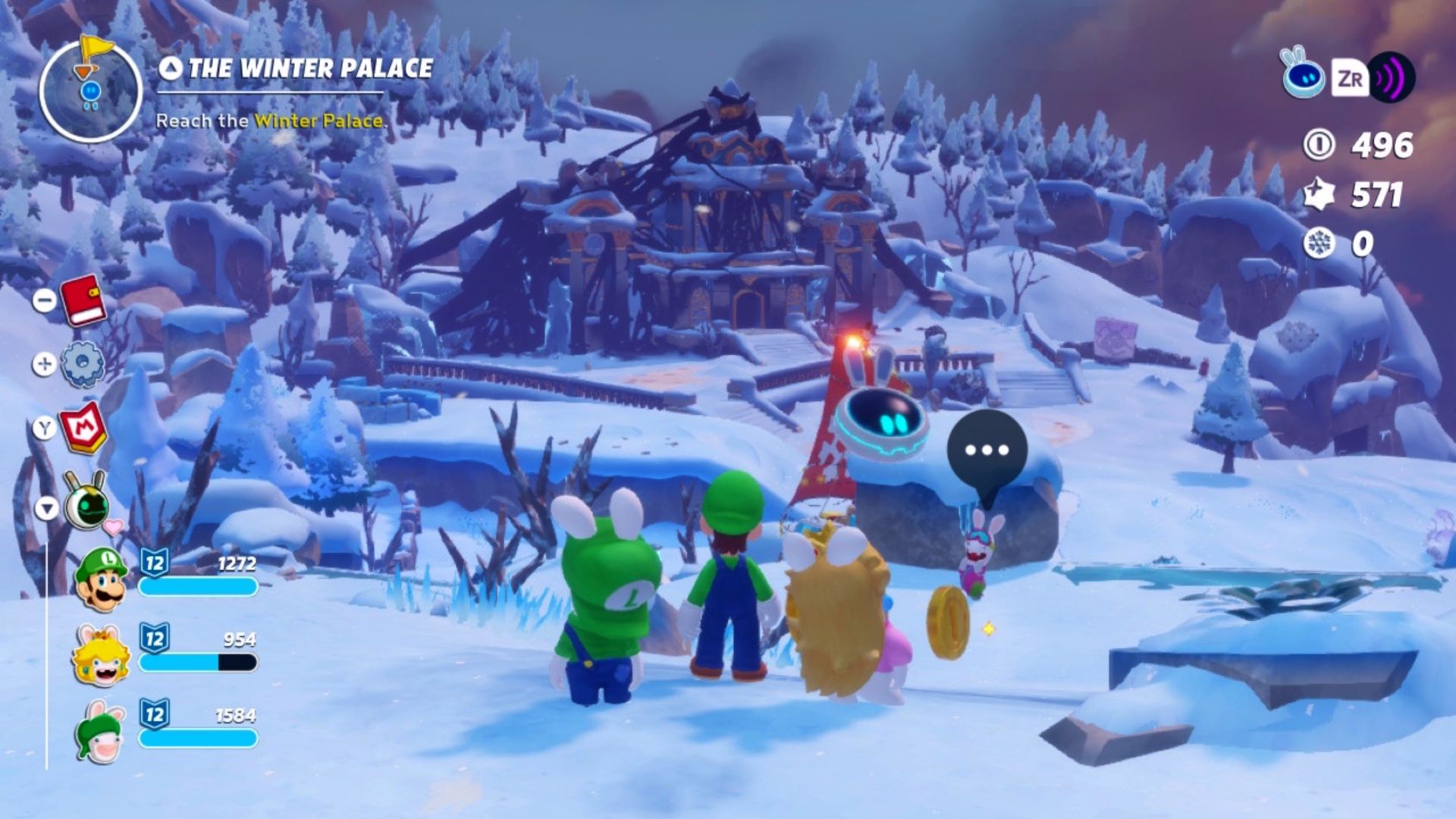 This next mission is the puzzle-heavy aspect of Pristine Peaks.

As you approach the palace, you will join forces with Captain Orion. After the kidnapping of Rabbid Rosalina, his daughter-of-sorts who mysteriously went missing, Captain Orion believes that the key to retrieving her is inside the Winter Palace – your next location.

After entering through the front doors, you'll engage in a fight named A Cold Greeting after which you'll be adding Pyrogeddon to your Sparks roster.

Next, you can choose to take the right-hand corridor at the top of the stairs for a short battle and to find a memory – or you can go through the double doors right in front of you. You'll find yourself in a large, round room with two statues in the middle: 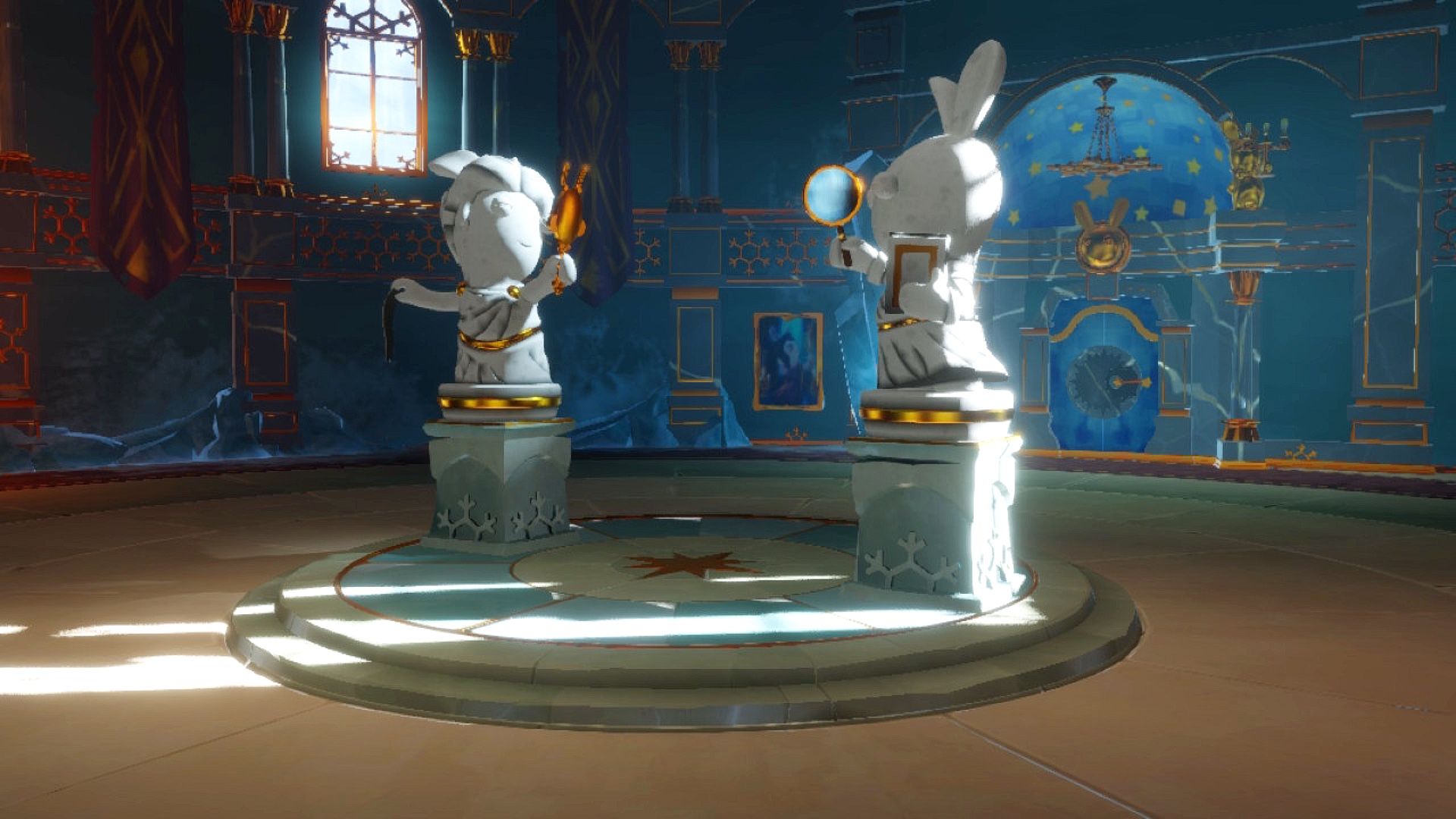 Beep-O will explain that there is a riddle to solve here; to get through the intricately-locked door in front of you, you'll have to activate each statue by finding and pushing two respective buttons.

The first state can be activated by exiting to the courtyard. You'll now have to either sneak around and evade battles with various enemies – Squashers and Sea Stooges primarily – or engage them in battle.

You'll eventually reach the end of the maze-like courtyard, and when you turn to your right, you'll see the button waiting to be pushed on a raised platform, activating the first statue.

For the second, head back to the circle-shaped room where the two statues are. This time, go through the double doors on your left-hand side. A short cutscene will play, and you will get a closer albeit brief look at Midnite. Don't worry – she'll be back.

Before chasing her down, go ahead and smash the fragile wall to the secret room at the right-hand end of the T-shaped corridor. This wall is indicated by the delicate cracks in it, signifying that it can be smashed with Beep-O's sonic ability.

Collect your planet coin and continue down to the opposite end of the corridor. Go through the doors, turn to your immediate right, and go through that set of doors as well. You'll see some more fragile walls that you can blast using Beep-O, and behind one of these is another set of double doors. Pass through them, and repeat this process on the fragile wall on your immediate left as you enter the next corridor.

Finally, you should be standing at the next button needed to activate that second statue! 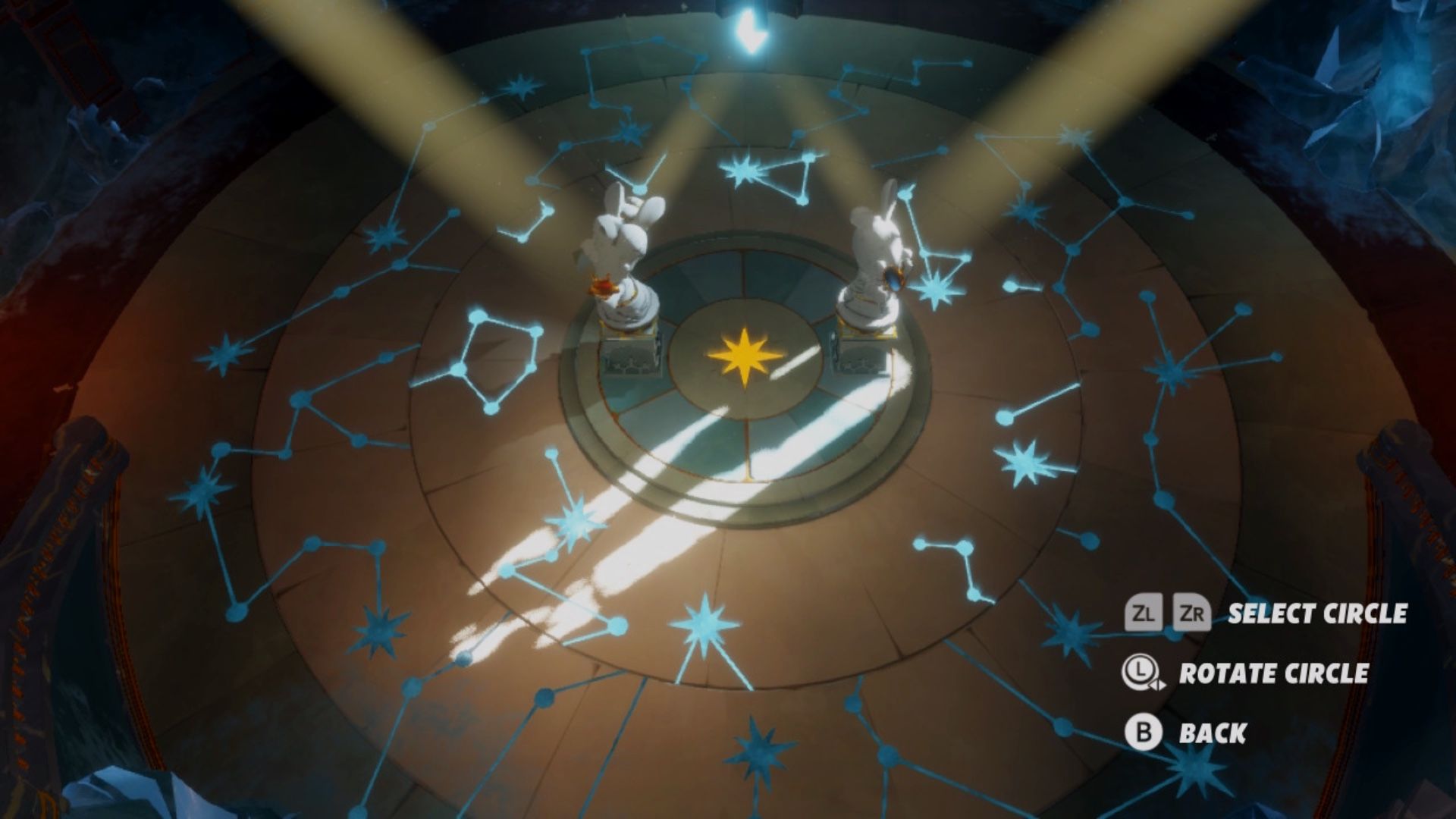 When you get back to the statue room, head back up the stairs to begin solving the Constellation Puzzle.

Rotate each disc so that the inner two rings line up with the outermost, immovable ring. Once the constellation is in alignment, you'll be able to use the now-unlocked door right at the front of the chamber.

Here is where you will have to defeat the Darkmess Tentacle, and finally face-off with Midnite. She and Edge seem to go way back… 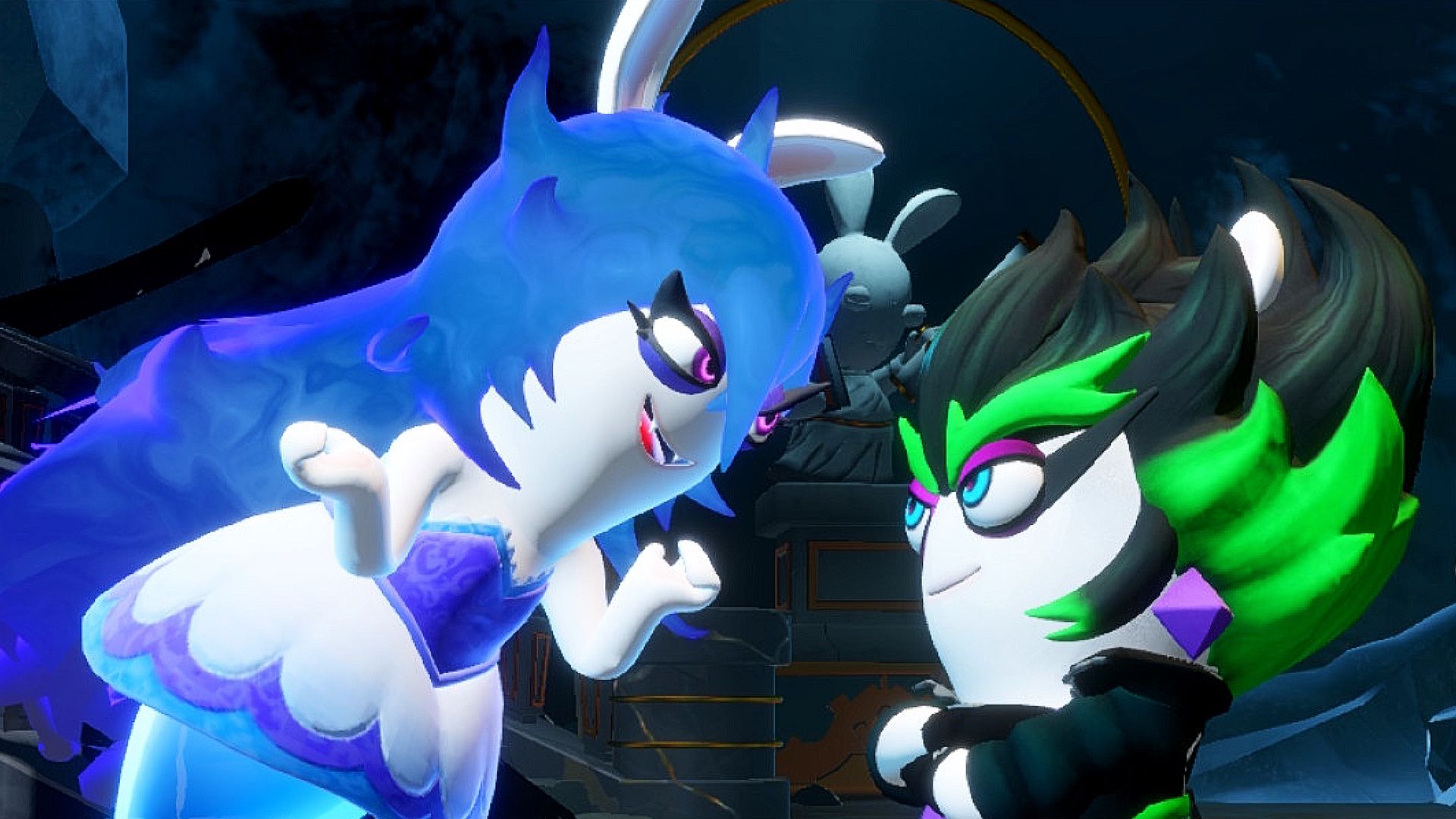 This combat sequence is quite a grueling, lengthy one comprised of three battles against Midnite. For this, you'll need to use four Heroes, with Rabbid Rosalina being a mandatory part of your lineup.

As well as her, we recommend the following Heroes:

In terms of Sparks, you'll want to keep Toxiquake assigned to one of the Heroes, as Squashers feature heavily in Midnite's defensive line-up. She is resistant to Frostbite attacks, so maybe keep Cryoblide on ice for this one.

Once you've defeated Midnite a third time, she will surrender, and you will be awarded the second Purified Darkmess Crystal. Next stop: Palette Prime!