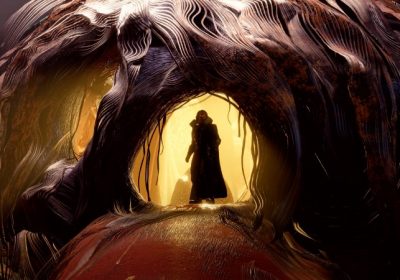 Hot off the Will Poulter-Adam Warlock casting decision for the third chapter in the Guardians of the Galaxy film franchise, Eidos Montreal released the launch trailer for its upcoming GOTG game. We get multiple montages of action setpieces and various characters to the tune of Motley Crue’s “Kickstart My Heart.” More importantly, we’re pretty sure Adam Warlock was teased towards the end of the trailer. His silhouette and cape are sure signs that he’ll be involved in the game, and many fans would agree.

In the comments section of the trailer’s Twitter post, one viewer asked if the shadowy, muscular hero (seen at 2:07 in the video above) is none other than the god-like fighter himself. The official Marvel’s Guardians of the Galaxy account responded with the eyes emoji – you know the one. If this doesn’t confirm that Adam Warlock is in the game, we don’t know what does! You can check out the brief exchange below.

Aside from watching the Guardians get their butts handed to them in the first few seconds of the trailer, the footage also showcased some solid jokes and zany combat scenarios – from Gamora frenetically juggling enemies in the air with her saber to Peter Quill sliding at enemies dramatically with his dual blasters. All in all, Marvel’s Guardians of the Galaxy looks like an adventure of galactic proportions.

The upcoming action RPG graced the cover of our magazine a few months ago, so head over to our dedicated hub to check out our exclusive interviews and long-form stories on what you can expect to see and do when the game releases later this month.

Marvel’s Guardians of the Galaxy launches for PlayStation 5, Xbox Series X/S, PlayStation 4, Xbox One, Switch, and PC on October 26.

Do you think Adam Warlock will be friend or foe when we encounter him? Let us know in the comments below!