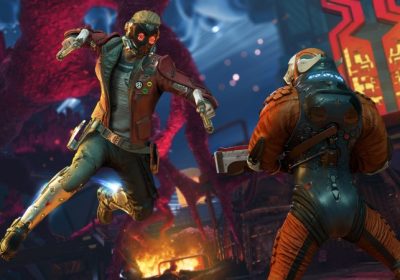 Delays can be incredibly beneficial to a dev team, giving the creators more time to release a polished product that they’re proud of. Naturally, the announcements can feel like a letdown for avid fans of a particular game. So, it’s always nice when big-budget titles come through the development process relatively unscathed. One such game – Marvel’s Guardians of the Galaxy – is on track to be ready for shipping when it launches worldwide next month. The sci-fi RPG adventure has officially gone gold.

Marvel’s Guardians of the Galaxy graced our magazine cover a few months ago and looks to be a blast of galactic proportions. Gameplay footage shows choice-based dialogue, real-time party commands in the midst of battle, 1960/70s songs to match the eye-popping action, and the silly humor that Peter Quill’s crew is known for. We’ve been introduced to characters like Lady Hell Hellbender (who awkwardly flirts with Drax on multiple occasions), Grand Unifier Raker, and Cosmo the Spacedog – the latter character can be seen dancing with Star-Lord in the gold announcement Twitter post above.

If you’re looking to learn all about the Guardians of the Galaxy game, you can head over to our dedicated hub here, where we’ve provided exclusive coverage on the making of the game’s universe, the design methodologies behind the combat system, conversations about licensed music, interviews with animation directors, and much more.

Marvel’s Guardians of the Galaxy comes to PlayStation 5, Xbox Series X/S, PlayStation 4, Xbox One, Switch (via cloud gaming), and PC on October 26.

Are you excited to see the good news about Guardians of the Galaxy’s gold status? What excites you the most about the game’s many mechanics, and what console will you play it on? Drop all your answers and more in the comments section!