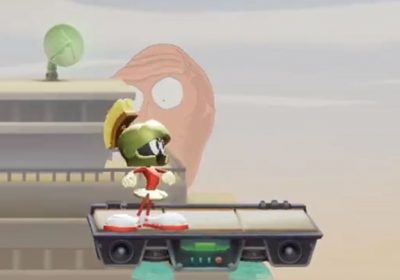 Marvin the Martian will be joining MultiVersus on Monday, November 21, a day earlier than most other fighters have been added to the game so far.

As usual, the confirmation comes from the official MultiVersus Twitter account, who shared a very brief clip of Marvin doing his iconic crouched run. Alongside the clip, the Twitter account said, "Message from Mars! Marvin arrives in our orbit tomorrow!! We'll have downtime from 9:00am to 10:00am pst. Tune in to our Marvin stream at 9:30am!"

Marvin arriving today might not come as much of a surprise to MultiVersus players as teasers and voice actor announcements usually go live a couple of days before the character is added in an update. In this case, however, Marvin is actually arriving a day earlier than usual, as most updates to the game are made on a Tuesday instead of a Monday.

This very brief clip seems to confirm a leak that happened last week when text for the entirety of Marvin's moveset was datamined from the Season 2 update for MultiVersus. That leak revealed pretty much all of Marvin's moves, such as a bubble gun, disintegration rifle, flag, and spaceship, but also made a brief mention that Marvin can move while crouched, which only a few characters can do.

Another interesting detail about Marvin is that he's an Assassin instead of a Mage, despite most of his moves having a long-range element to them. We have yet to find out whether Marvin is an Expert rank character or not, but his moveset did seem pretty complicated, so it's possible that he'll end up going the way of Rick and Morty and being a little bit more expensive to buy.

Although it doesn't seem like there's anything else massive coming to MultiVersus tomorrow expect for Marvin, character updates still usually bring along a few new skins to buy and some nerfs and buffs for the whole of the roster. It seems unlikely that we'll see the Game of Thrones map tomorrow too, but we know that's coming at some point in the season.