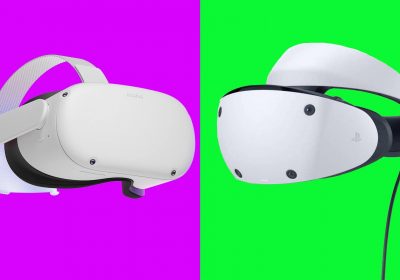 Slowly but surely, the Meta Quest 2 is evolving beyond its roots as a gaming headset.

Subscriptions to workout apps have turned the standalone headset into a viable fitness wearable, whereas the COVID-19 pandemic highlighted the benefits of virtual productivity. Meta, meanwhile, is increasingly trying to push the device’s social features as it doubles down on its vision of the metaverse, hosting Foo Fighters concerts and viral campaigns for Wendy’s.

But we haven’t arrived at VR’s multi-functional future just yet. It’s early for these new categories, and the vast majority of apps being developed for Quest 2 are still games, with many of the most talented software developers today working in the gaming industry. Meta’s near-term strategy, meanwhile, is focusing on heavy hitter titles like Resident Evil 4 and Medal of Honor: Above and Beyond. As it stands in 2022, Quest 2 is first and foremost a games console.

It’s on this front that the device — alongside the rest of the VR industry — has been floundering ever so slightly of late.

Clearly, Quest 2 had a strong holiday season with big new launches like Resident Evil and the Oculus app topping charts. But, since then, things have been a little too quiet. We’re now four months into 2022 and there’s been some great titles, like the launch of Zenith, Upload’s first ‘Essential’ game of the year in Ultrawings 2, and this week’s release of the surprisingly solid Green Hell VR. But we haven’t seen any truly significant, AAA titles to turn heads from either Meta or any other publishers, and most games releasing on the platform have a tendency to appear as if from thin air, with little to no marketing push. Cracks are also starting to appear in Meta’s strict store curation and release scheduling (seriously, why are Little Cities and Cities: VR releasing a week apart?).

Whereas the traditional gaming scene has been basking in an embarrassment of big titles, from Elden Ring to Horizon Forbidden West, there’s been very little to talk about in the VR space.

In the short term at least, this is a problem for Meta. We may be beginning to see Quest’s momentum start to wane; Valve’s Index saw bigger growth in last month’s Steam Hardware Survey than Quest, and the prospect of Sony’s PSVR 2 headset, with the promise of bigger, graphically richer VR experiences, has taken some of the spotlight away from the headset. Even within Quest’s existing fanbase, attention is turning to what the high-end Project Cambria will deliver when it releases later this year (although, admittedly, it will still be able to play Quest games). 2021 was similarly sparse for big releases, but Quest 2 was still the hot new item without any major new headsets to challenge it. Meta could afford to be patient.

I don’t mean to suggest that the headset’s in any sort of immediate danger. Quest is still going to be the dominant VR platform for years to come and I don’t believe PSVR 2, with its PS5 dependency, will sell more units than the collective Quest line over the next five years. As those other VR use cases become more and more prominent and future headsets continue to close the fidelity gap, the headset is only going to expand in appeal.

But, certainly, Sony’s headset promises to serve as a balm for dedicated VR gamers tired of experiences that wrestle with the power of mobile computing. And that audience matters.

Even just a few seconds of Horizon Call of the Mountain footage demonstrated gorgeous gameplay far beyond what’s currently possible with standalone VR. Meanwhile, between its five owned VR studios (including the developers of Beat Saber, Onward, Population: One, Asgard’s Wrath and Lone Echo) and partnerships with companies like Ubisoft and Rockstar, we still don’t know when the next massive Quest game will land and what it will look like.

That’s why Meta’s upcoming Quest Gaming Showcase is particularly crucial to its 2022 plans.

This could well be Meta’s last chance to show what’s coming to Quest and why there’s reason to be excited before PSVR 2 puts its foot on the gas in the near future. It’s going to need to show us counterpoints to the visually richer and likely bigger games PSVR 2 is going to be capable of, and it’s going to need to give us a roadmap for what the year’s going to look like.

Hype is how selling games consoles works. Supply constraints aside, people are rushing to buy PS5s because they know God of War: Ragnarok is coming this year and a Spider-Man sequel will follow in 2023. People want Xbox Series X units because Bethesda has cemented the launch of its next open-world epic for this holiday season. It might keep getting delayed, but the promise of a sequel to The Legend of Zelda: The Breath of the Wild has kept people invested in the Switch these past few months and years.

Quest is lacking those hallmark titles right now. There are games we know that will cause a stir, like Grand Theft Auto: San Andreas VR and new Splinter Cell and Assassin’s Creed games. We know that the new Walking Dead game is coming to Quest, as are plenty of other titles from some of the best VR developers. But most, if not all of these still only exist as press releases and key art with logos; it’s hard to drum up much excitement for games we haven’t actually seen yet. What are we going to be playing in the next few months? What’s Quest’s big holiday releases? Why, essentially, should a VR gamer buy a Quest 2 in 2022 over waiting for PSVR 2?

This is Meta’s chance to pull back the curtain on that line-up and cement Quest’s place as a device with a regular flow of incredible content. If it misses the mark, then the company risks losing ground to other headsets in 2022 as the conversation switches right back over to what new hardware will instead enable.

The Meta Gaming Showcase airs at 10am PT on April 20 and we’ll have all the headlines from the show.