Monster Hunter Rise hands-on preview – a beast of a demo 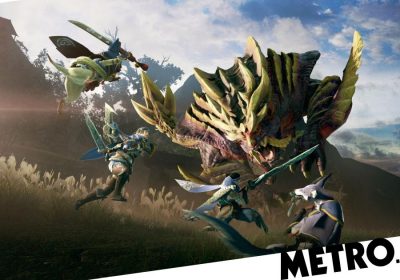 The Nintendo Switch gets its own exclusive Monster Hunter game, that looks set to boost the series’ popularity even further in the West.

Even at the best of times the new year usually begins with no idea of what Nintendo is planning and the forlorn hope that they’ll kick things off with a Nintendo Direct. That may not have happened yet, for Switch games in general, but on Thursday afternoon there was an online event for Monster Hunter Rise, Capcom’s exclusive new Switch game due out this March. The livestream outlined more of the game’s features and announced a free demo to be released this week – a demo that we’ve already been playing for the last few days.

Monster Hunter Rise was announced last September, along with role-playing game Monster Hunter Stories 2, but until now it hasn’t been entirely clear what it is. Within a few minutes of trying the demo it becomes obvious that this is a full fat Monster Hunter game, with a scale and ambition that is almost the match of Monster Hunter: World – as well as an open world environment that immediately feels reminiscent of Zelda: Breath Of The Wild.

There are also some nods to the series’ glory days on the PSP, with a slightly more streamlined approach to the titular goal, and a range of significant new features. Capcom could’ve tried to create a cut-down version of World but this is much more than that: a brand new game created from scratch for the Switch and with a distinctive feel all of its own.

If you’re not familiar with the Monster Hunter series it started way back on the PlayStation 2 as a clone of Phantasy Star Online, with a similar emphasis on four-player co-op action and light role-playing. Once it made the move to the PSP it became one of the most popular franchises of all time in Japan, but only found belated success in the West with last generation’s Monster Hunter: World. The success on the PSP was due largely to its local multiplayer options, something which was irrelevant with World but is once again an option with the Switch.

Given how good the game looks and plays we can only assume Rise is going to be a huge hit in Japan, but it should do just as well in the West. There are still some esoteric elements once you get into the minutiae of different weapons and items, and the camera demands a lot more manual labour than many will be used to, but the basics are easy to understand and even the demo goes to great effort to explain them via interactive tutorials.

The game’s set in a pseudo-medieval world where monsters (mostly dragons and dinosaur-like creatures) exist as part of a well-established ecosystem. Your role is to hunt them for food and as a resource for creating new armour, weapons, and items. Instead of following firebugs, as in World, you’re now directed towards one of a handful of possible locations by a simple objective arrow, but the open world is large and you’re free to explore it however you want, picking up additional resources along the way or fighting smaller creatures.

The demo features two quests: one to fight a Great Izuchi and the other the tougher challenge of a Mizutsune. Both have been in previous Monster Hunter games and the 14 different weapons types, that you choose between before starting a hunt, are exactly the same as Monster Hunter: World.

That makes Rise sound less distinct than it is though as while it undoubtedly shares some assets with the last game the series has always regularly recycled creatures and concepts as a matter of course. Capcom are promising a number of new creatures as well though, such as cover star Magnamalo, shape-shifting Aknosom, and amphibious Tetranadon. There’s also a new feature called a Rampage, which sounds a bit like a survival mode but isn’t in the demo.

What was is the new Palamute creatures, which are dog-like companions that you can take along with you to fight or to ride on if you need to move more quickly. In single-player you can take both them and a cat-like Palico, which helps to make up for the fact that there are no computer-controlled hunters. Both partner creatures are useful in a fight and can be upgraded and equipped as you see fit (our Palico seemed to be throwing Beyblades at the monsters, which constantly amused us).

There’s also a new Wirebug creature that has multiple applications, the most obvious of which is to use it as grappling hook to traverse the environment or to quickly get out of a monster’s way. Each weapon can also use them in a different Silkbind attack that can ensnare monsters and, in some cases, allow you to use them as a mount.

World allowed you to briefly climb onto monsters to trick them into running into a wall but Rise goes much further by turning smaller wyverns into rideable creatures with their own moves and a charge meter that allows you to perform unique finishing attacks. Wyverns are difficult to control, since they obviously don’t like being used as your battle mount, but the range of abilities is impressive, especially if they’re different for each creature.

Rather than being an abridged version of Monster Hunter: World, Rise already feels like a significant new entry in the franchise. That said it’s the graphics that grab you at first, as they’re considerably better than we were expecting. Clearly they’re not as good as World, with a lot of shortcuts taken with the landscape in terms of object detail, but that not only keeps up the frame rate but ensures the monsters can look as good as possible.

The various creatures really do look like something from a PlayStation 4 game and watching them roam across the Zelda-esque landscapes is highly impressive. The only element of the presentation we didn’t like was the appalling dialogue and voiceovers, that have everyone talking like an American teenager. In particular, Master Utsushi, who guides you through the tutorials, speaks like a Californian dudebro and it ruins the immersion every time he appears.

In terms of the online options, they were only switched on Wednesday afternoon, so we haven’t had much time with them, but they seemed to work okay when it was just journos playing.

You can judge for yourself though when the demo becomes free to download from the eShop at 8am GMT on Friday, January 8. It’s a time limited demo that allows you to play up to 30 times, although the online will be switched off on February 1 when the demo is removed from the eShop. (There are rumours that the game’s also coming to PC but if it is it won’t be anytime soon, as nothing official has been announced yet.)

The Switch has been unexpectedly good for third party support since day one but Capcom, usually one of Nintendo’s most reliable partners, has been surprisingly slow to offer substantial support. This is the real deal though and regardless of whatever Nintendo themselves may release in 2021 this is clearly set to be one of the biggest Switch games of the year.