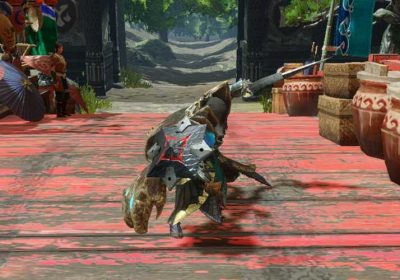 The Sword and Shield is one of Monster Hunter Rise's most versatile weapons. Although it may seem simple at first, this weapon can do just about anything you need it to, with a fast-paced close-range playstyle that is extremely rewarding to use once you get the hang of it.

The Sword and Shield offers a variety of different playstyles, from elemental damage to stunning the monster, there are many different ways to succeed. Let's take a look at each of the Sword and Shield's abilities, how to use them, and some tips for mastering this weapon.

The Sword And Shield 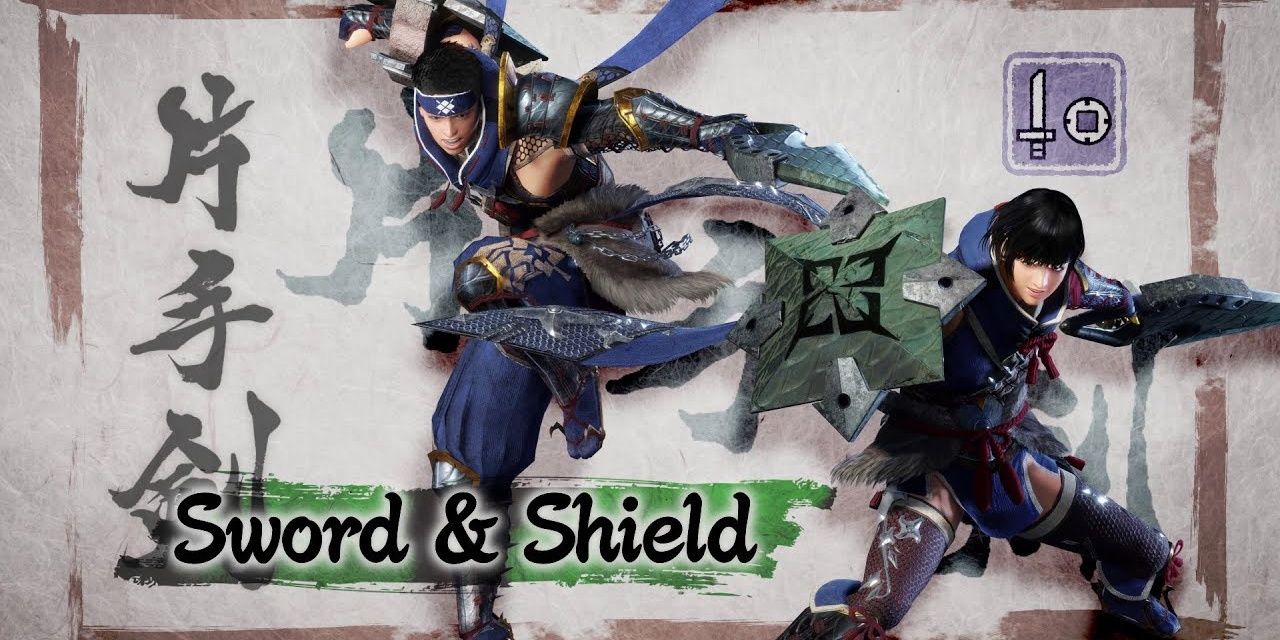 While this may make the weapon look uninteresting, the Sword and Shield shines in its simplicity. With its varied attacks, you can dart around the monster, always on the offensive while stringing together combos and using a variety of tools for anything the monster can throw at you.

In addition, you can block lighter attacks using the shield. Blocking an attack will greatly reduce the amount of damage it does, but bigger attacks will push you back slightly, knocking you off balance. Blocking should really only be reserved for situations where you can't dodge the attack.

Sword And Shield – Skills And Abilities 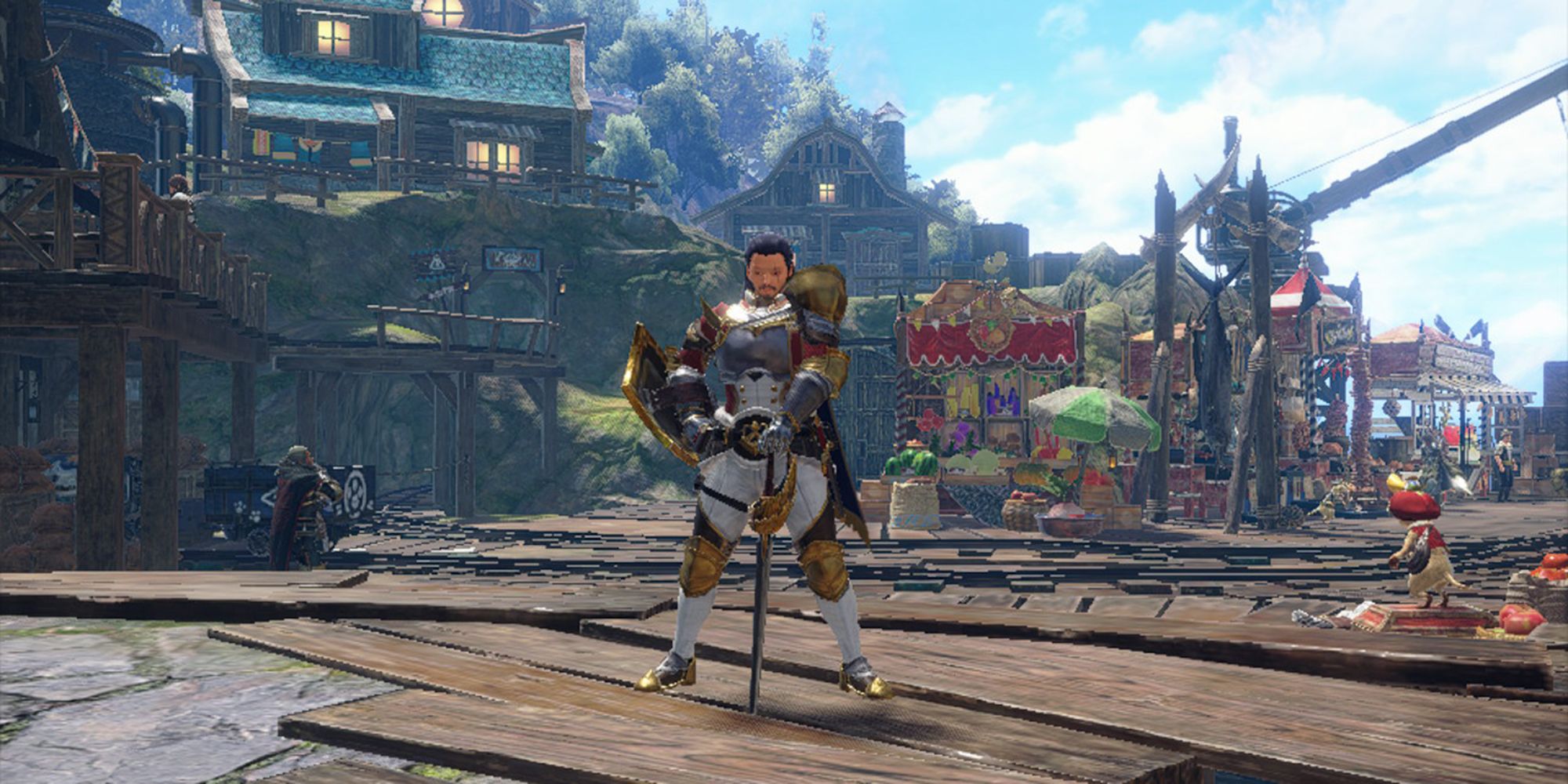 Destroyer Oil (ZL + A): Coats your sword in an oil that triggers when ignited by the friction of your shield. When triggered, monsters flinch more easily.

Metsu Shoryugeki (ZL + A): Launch into the air, uppercutting with your shield. If you are attacked near the start of the attack's animation, you will counter the attack, dealing more damage.

Windmill (ZL + A): Spin your sword and shield around using a Wirebug, dealing damage repeatedly in an area around yourself. Incoming attacks are negated while Windmill is active.

Shield Bash (ZL + X): Charge forward with your shield to the front. If used during a monster's attack, you can parry the attack and continue on the offensive.

Falling Shadow (ZL + X): Launch upward, leaping a short distance and attacking. If the attack connects, you can enable an additional downward attack that can be chained into normal attacks.

Sliding Slash (X + A): Slide forward before slashing. If the attack connects, you will scale the monster, launching upward and allowing for an additional attack.

Drill Slash Combo (A after shield attack): Thrust the sword into the monster after attacking with the shield, hitting multiple times.

Sword/Shield Combo (X after Side Slash): Attack twice utilizing the sword and shield, enabling further combos with both weapons.

Twin Blade Combo (X after Side Slash): Attack twice with the sword, ending with a slash that enables additional sword attacks.

Sword And Shield – Tips And Tricks 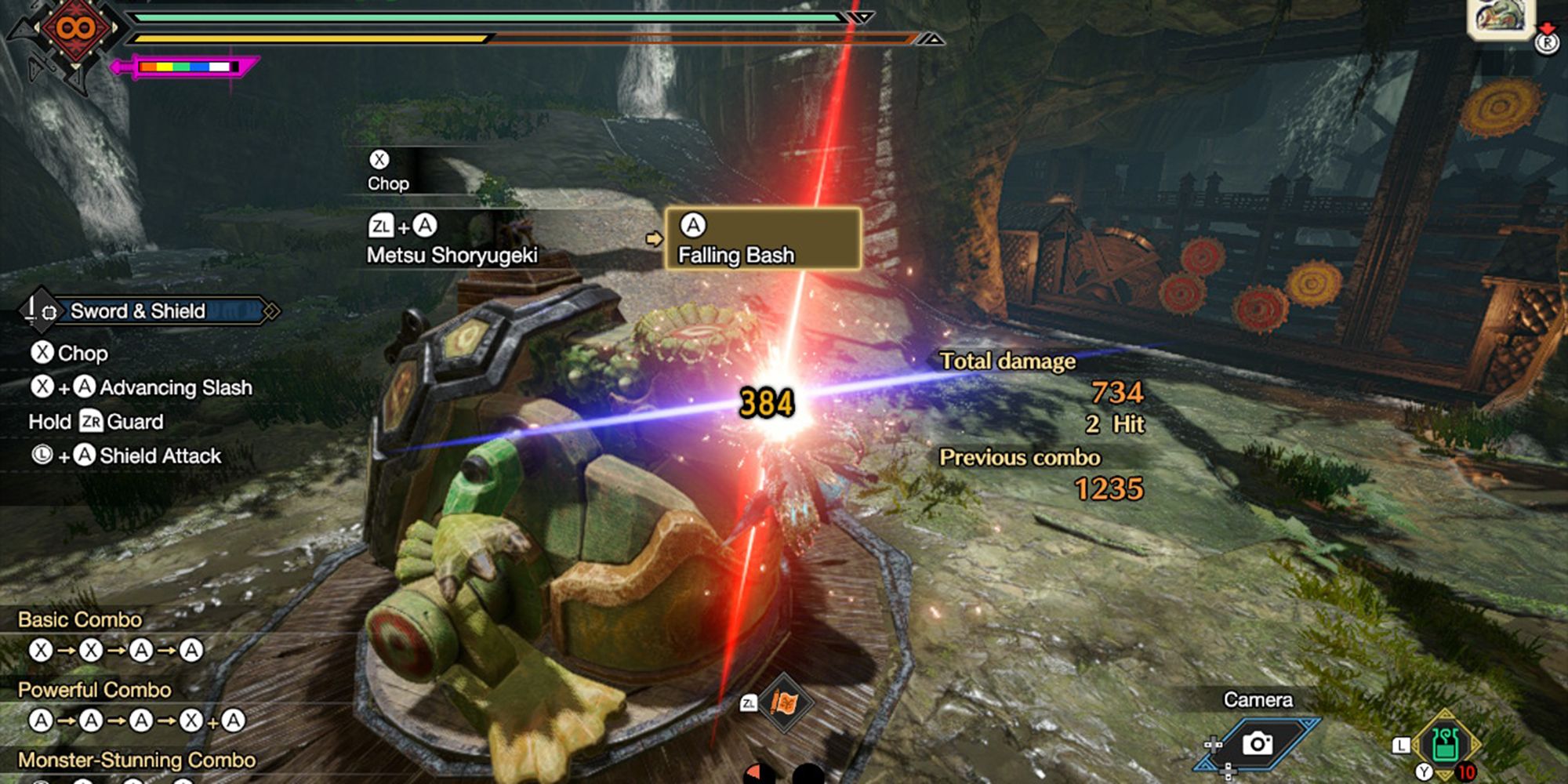 The Sword and Shield has several different combos that can be used in a variety of situations, depending on where the monster is and what it's about to do. When the monster is immobilized or knocked down, you can use the following infinite combo to unleash high, consistent damage while remaining in place.

This quick succession of attacks is excellent for applying elemental damage due to the high number of hits. This combo uses the Twin Blade Combo switch skill, as the Sword/Shield Combo switch skill doesn't link into Lateral Slash.

To finish the combo, press X + A after Twin Blade Combo to execute Spinning Reaper, dealing high damage and finishing off the chain of attacks.

For repositioning on the fly while still dealing damage, use the combo above but input the desired direction during Lateral Slash and Return Stroke, turning them into Shield Attack and Shield Bash, respectively. Using this combo, you'll be able to move around the monster, avoiding attacks or repositioning towards its head or other weak points.

Keep in mind if you are using Drill Slash Combo, this combo becomes less effective for repositioning due to the longer animation of Thrust and Drill Slash.

The Sword and Shield has access to a number of different aerial attacks, allowing you to get above the monster to inflict mount damage. By executing a back hop, then holding A, you will charge up a forward dash attack, which, if the attack lands, will launch you into the air. While airborne, you can press X to slice downward with the sword, or A to bash with the shield. Both of these attacks inflict mount damage, which can lead to toppling the monster for Wyvern Riding.

Additionally, by using Falling Shadow, you can jump over the monster and execute similar airborne attacks. The easiest way to get into the air is using the Sliding Slash Switch Skill, which will have you jump into the air after landing the first hit of the attack, allowing for airborne follow-ups.

The Sword and Shield has some great switch skills that emphasize its role as the master of variety. Using Metsu Shoryugeki or Shield Bash, you can counter the monster's attacks while inflicting stun damage, leading to an eventual knockout.

A Weapon For Every Situation

For example, if you are fighting Magnamalo, who is weak to water, creating a set around water damage will be highly beneficial. This would include crafting a water-damage weapon, and slotting in water attack-up decorations. With certain armor sets, you can even customize further against your target, slotting in Earplugs or similar for monsters who utilize these types of attacks.

Overall, you'll get the most out of Sword and Shield by knowing your match-ups, and playing around the monster's attacks and mechanics, using openings in their attacks to your advantage.