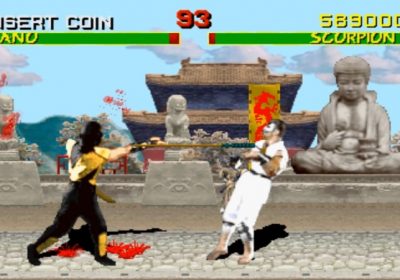 The first Mortal Kombat game turns 30 years old in 2022, but series co-creator Ed Boon points out that 2021 marks 30 years since he and fellow creator John Tobias began making the game. To mark the occasion, Boon hopped on Twitter to share a fascinating behind-the-scenes clip of the making of Scorpion’s iconic spear move.

Mortal Kombat will be 30 years old in 2022. But 2021 marks 30 years since we actually BEGAN working on the game. To celebrate, it seemed like a fun idea to share some behind-the-scenes stuff. This clip shows how we created Scorpion’s iconic (GET OVER HERE!) spear move. (1 of 9) pic.twitter.com/3f1tdvjG9R

Boon’s Twitter thread, which you can view in the link above, breaks down everything behind the over two-minute clip. We see Scorpion actor Daniel Pesina rehearsing the motions for the spear throw and subsequent yank as Boon and Tobias direct him on what Scorpion’s movement and posture should be, which they concoct on the fly. “We certainly did a ton of prep for our video shoots, but some ideas came to us while filming,” says Boon in the thread. “With Scorpion’s spear, it started with ‘You know what would be a cool ass move?’”

He continues by explaining, “One of those details was how fast Scorpion threw the spear, which had to be quick so he could catch opponents by surprise. This meant keeping the animation simple & very few frames. We also wanted the spear to pass over a ducking opponent, so we kept it at chest height.”

The nine-tweet thread is worth checking out for Mortal Kombat enthusiasts as Boon breaks down the challenges and tricks behind capturing animation frames using limited memory. It’s pretty awesome to be, as Boon describes, a “fly on the wall” for the creation of the series’ most famous move.

As for Mortal Kombat’s 30th birthday, there’s no telling what Netherrealm could have in store. Mortal Kombat 11 effectively concluded with the release of the Aftermath expansion and the final batch of DLC fighters. It seems early for the reveal of MK 12, so does that open the door for another game announcement? Given Ed Boon’s trademark sneakiness, it should be a fun year to keep an eye on Netherrealm.