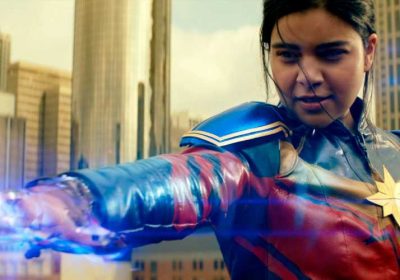 Ms. Marvel only just got her debut and she’s already the most beloved MCU series to date. Ms. Marvel has a 95% fresh rating on Rotten Tomatoes. That beats What If…?’s 94% for best overall Marvel series, and beats Loki’s 92% for best live-action series.

The first Ms. Marvel episode aired on Wednesday, introducing us to Kamala Khan, a high school student who’s a bit of an Avenger’s fangirl. She especially likes Captain Marvel, which is why she created a Captain Marvel cosplay for AvengerCon. Sadly, her strict parents told her to stay home, but when she finds a mysterious bangle that seems to offer her crazy magic powers, there’s not a lot they can do to keep her housebound.

Things are a little different in the show compared to the comics, where Ms. Marvel’s abilities are more about polymorphing rather than projecting crystalline energy. Maybe those polymorph abilities will come in future episodes, which air each week until July 13. We know at least one episode will take place in Thailand, but we’ll keep all remaining spoilers to a minimum.

Not all Marvel endeavors are hits. Morbius famously flopped at the box office when it first arrived back in April, although it managed to generate the "Morbin Time" meme before it went. Sony thought that the memes might have been enough to resurrect the film and even gave it a second showing at 1,000 theaters nationwide, but it predictably flopped for a second time. The memes, however, will never die.