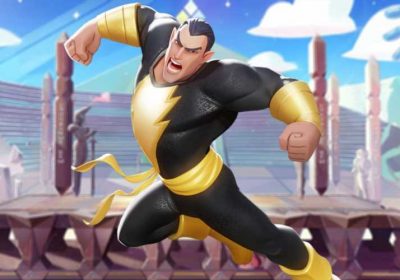 He may have needed a little time in the oven, but Black Adam is finally here and just like he promised, he's changed the game's hierarchy. To celebrate, MultiVersus revealed Black Adam's full moveset as well as a detailed breakdown via their official Twitch account that will help you take on the role of The Man In Black and dominate the battlefield.

If you saw Black Adam's release date announcement last week, you'll know that Black Adam is a Bruiser. As the class type suggests, he has a bunch of powerful melee attacks for players to utilize, most of them having something to do with lightning. For example, Black Adam has a regular down attack that makes lightning erupt from the ground wherever an enemy stands. Better yet, this attack will even strike opponents clinging onto the sides of the arena, making him one of the best edge guarders in the game.

As for Black Adam's up attack, an arc of lightning travels between his hands before a bolt of lightning comes down from the heavens to strike anyone underneath it. Unfortunately, this lightning bolt has a cooldown, meaning you can't just spam it willy-nilly. This move is especially useful in Team games too, as if you hit an ally with this lightning bolt, it will give them electrified gauntlets that apply a debuff to foes whenever they're struck.

Black Adam is also quite the ranged threat as well, as showcased by his special attacks. For example, Black Adam can shoot out an orb of lightning and can change the distance it travels depending on how long he charges the attack. More interestingly, this orb will also chain to any nearby enemies or heavy projectiles, giving Black Adam a lethal ranged attack that can potentially travel the length of the stage.

He's also a bit of pain for other projectile users to deal with, as Black Adam can also create a large bubble that will deflect several ranged attacks before disappearing. However, be aware that this bubble will remain where it's placed, meaning that other enemies can also use it to their advantage. If Black Adam sounds like your jam, he's ready and waiting to be unlocked in MultiVersus right now.