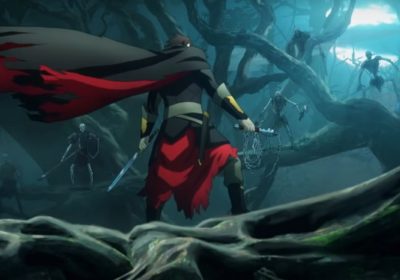 Netflix’s animation adaptation of Konami’s popular game series Castlevania is coming to its fateful end. The show began in 2017 and is preparing to conclude this month with its fourth and final season, returning the sardonic monster hunter Trevor Belmont to his duty of eradicating evil. Season 4 is due to begin on May 13, and Netflix recently dropped a new trailer to give fans a preview of what is in store.

When news of the final season’s air date broke, fans were comforted by reports of a spin-off show – easing the imminent conclusion of one of the best video game adaptations. The new Netflix show will allegedly be set within the same universe as Castlevania, but its narrative will be tailored to new characters. The former showrunner and writer, Warren Ellis, will not be involved in the project due to allegations of sexual misconduct that surfaced last year. Season 4 was forced to continue without Ellis’ contribution, and it is currently unknown if this departure affected the show’s substance or not.

The action-packed official trailer once again balanced the threat of ancient beasts with Trevor Belmont’s dry humor. Richard Armitage will be returning once more to voice the cloaked slayer, as Belmont and his handful of warriors prepare to stand against Graham McTavish’s Dracula once again. There’s nothing like witnessing fast-paced combat scenes that slay to the beat of the trailer’s music, but season 4 will no doubt carry a bittersweet tone as well.

Our four-star review of Castlevania: Season 3 applauded the series’ ability to present high-octane action that never runs out of steam. The series has been consistent in its performances and stunning animations, and even though a new Castlevania game is out of the question, for now, the series certainly scratches the itch we have for vampire hunting.

Before the final season knocks on our doors, it’s always worthwhile investing in a rewatch or recap of some capacity. In order to digest the contents of season 3, we’ve compiled a list of ten, burning questions to mull over before the next installment is upon us, even though some questions are designed to remain unanswered.