New Nintendo Switch out now: Improved console available to buy in the UK 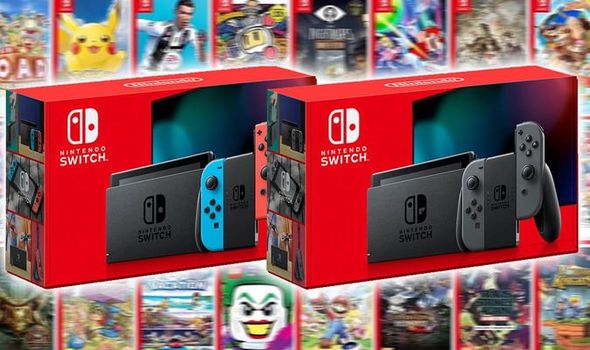 Nintendo fans are able to buy the brand new and improved Switch in the UK right now.

The original Switch, which launched over two years, had battery life in handheld mode for between 2.5 to 6.5 hours.

This has been greatly improved with the new Switch which has battery life of between 4.5 and nine hours.

Unlike previous upgrades, this new model won’t be featuring a revised name such as with the New 3DS.

This upgraded Switch will simply be replacing the original model which launched back in March 2017.

The way to tell the difference between the upgraded Switch and the original one is the latest model comes in a new, predominantly red box.

And a few online retailers in the UK currently have this new Switch listed on their site and available to buy.

The GAME website as well as Base.com both have the new Nintendo Switch models as available to buy.

Both GAME and Base have priced the Nintendo Switch as £279.99.

GAME have the new Nintendo Switch available to buy right now while Base.com will be shipping it from Friday August 30.

Following on from the release of this upgraded console Nintendo will also be selling another Switch next month.

On September 20 the Nintendo Switch Lite will be launching across the globe.

This is a handheld-only version of the Switch which boasts non-detachable Joy-Cons and comes in a smaller size than the original console.

The Switch Lite will be available in three colour schemes at launch – yellow, grey and turquoise with a limited edition Pokemon version launching later.

Most retailers in the UK are selling the Switch Lite for £199.99 but there is one online store that has listed the console for significantly cheaper.

ShopTo at the time of writing have all three Switch Lite models available to pre-order for £187.75.

This is a six per cent saving, or £12.05 reduction, on the price most retailers are selling the Switch Lite for.

The Pokemon Zacian and Zamazenta Edition of the Switch Lite is available to pre-order at ShopTo for £189.95.

This console is set to launch on November 8 2019, and is a saving of just over £10 on the regular price of the console.

And, at the time of writing, the retailer also has low availability for the grey version of the upgraded Switch.