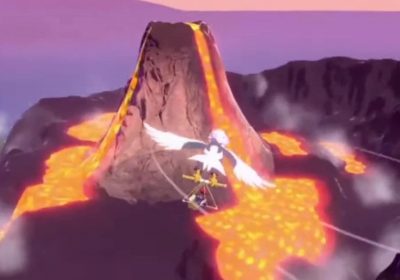 We’re under a month away from the release of Pokemon Legends: Arceus, and that means it’s time for a new trailer. This one comes all the way from Japan and shows us part of the Hisui region that we haven’t seen before.

Serebii posted this trailer online which begins with a brief showcase of several of the new Pokemon coming in Legends: Arceus, including Wyrdeer, Basculegion, and Hisuian Growlithe. Then we’re given a view of a giant volcano courtesy of a passenger-carrying Hisuaian Braviary.

There’s no indication of where this volcano is, but so long as Sinnoh’s geography hasn’t changed significantly since the days it was known as Hisui, it’s probably Stark Mountain. Located in the Battle Zone just off Route 227 (in the Sinnoh region, anyway), Stark Mountain is where you meet and battle Heatran back in the Gen IV games as well as Brilliant Diamond & Shining Pearl.

Or it's possible we're looking at Mt. Coronet during a more volcanically active past age. We'll have to wait for more info to find out for sure.

In case you missed it, Pokemon Legends: Arceus had another trailer from earlier in December that introduced the two feuding clans of the Hisui Region. The Diamond and Pearl clans aren't at war, but neither are they totally at peace. Adaman is the stylish leader of the Diamond clan, while Irida is the lovely head of the Pearl clan. The trailer also showcases the mercantile Ginkgo guild who will provide Galaxy trainers with supplies on their journey.

There are new details of some of the coming Legendary Pokemon that'll be in Legends: Arceus. Darkrai and Shaymin will both be available as post-game research requests in Jubilife Village so long as there's Brilliant Diamond or Shining Pearl data on your Switch. And you can also get some in-game cosmetics that you can claim before the end credits but after you join the Galaxy Expedition team, which comes about an hour into the game.

Pokemon Legends: Arceus arrives on the Nintendo Switch on January 28.