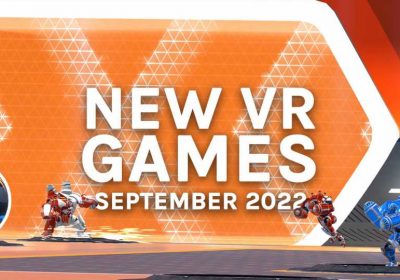 September is here and brings a stacked month of VR games our way. Here’s our rundown of all the new VR releases coming to Quest 2, PSVR, PC VR and Pico platforms in September 2022.

Here’s a quick round-up of releases from the end of last month, in case you missed them.

Puzzling Places received a new puzzle as part of a free update on Quest and PSVR, while Tennis League VR launched a free demo on Quest. Real VR Fishing fans can jump into the the latest DLC release, this time set in Japan. Towards the end of the month, Nerf Ultimate Championship launched for Quest 2 — you can read our impressions here.

Originally slated for release in March for both PC VR and PSVR, this arcade-style, on-rails shooter got indefinitely delayed earlier this year. However, it’s available now with a slight change in release platforms – it’s releasing exclusively on PSVR for the time being, with no PC VR version at the moment. In regards to release on other platforms, the developers say they will “see what the future brings,” but there’s no concrete plans just yet.

This sequel to 2017’s Interkosmos will see you pilot and manage an experimental space capsule on New Year’s Eve 1999, trying to save humanity from a devastating crash and the infamous Y2K bug. Interkosmos 2000 is available now on Quest 2, with plans for a PC VR and PSVR release further down the line.

After a long stint on App Lab and a release on Pico platforms earlier this year, Deisim makes its transition over to full Quest Store release this month, alongside a release on Steam for PC VR as well. Available for $14.99, Deisim gives you the power of a god, ruling down on your subjects from above as you help them progress from the stone age to the industrial revolution.

The latest DLC for rhythm game Synth Riders is here and it’s a team up with Riot Games’ hugely popular MOBA League of Legends. The music pack features five tracks, available for purchase individually for $1.99 or as a bundle for $7.99. You can check out the tracklist and read more details here.

The latest in ForeVR’s series of family-friendly sports games, ForeVR Cornhole brings popular lawn game cornhole into VR for the first time. There’s support for both solo play against NPCs or online play with 1v1 and 2v2 matches. It’s available now for Meta Quest 2 for $14.99.

Mash Me Up is an upcoming online multiplayer VR game from Holonautic, the team known for Hands Physics Lab. This new title pits two players against each other in bite-sized 1v1 online minigame scenarios – we tried it out at Gamescom and loved what we saw. The game’s full release is TBC, but it’s available to try now in beta on Quest via App Lab.

Originally set for a June release, Eolia is the next instalment in ROTU’s Rhythm of the Universe series, available exclusively on Quest 2. Following on from Ionia, Eolia supports hand tracking and was designed as a ‘hands-first’ title. That being said, it does also support Touch controllers, if you prefer. It’s available on the Quest Store now for $14.99.

After launching on PC VR in Early Access over two years ago, Into The Radius is coming to Quest 2 this month. This survival shooter is heavily inspired by the STALKER series – stealth is the key to success, with a strong focus on resource and weapons management. It’s available on Quest 2 from September 8.

NFL Pro Era, the first officially-licensed NFL VR game, runs onto the field later this month. It will include all 32 professional NFL teams and let players embody the role of quarterback. A recent tweet from NFL player Lamar Jackson revealed a release date of September 15, but didn’t mention specific platforms. We’ve reached out for clarification and will update the article if we receive a response, but development for both Quest 2 and PSVR was confirmed back in April.

Following on from hits like Demeo, Blaston and Cook-Out: A Sandwich Tale, Resolution Games’ next VR release is almost here. Ultimechs is a competitive multiplayer VR title that plays a little like Rocket League, but with some nice VR twists. It will be available as a free-to-play title on all platforms, with an optional ‘UltiPass’ add-on for mech cosmetics and customization.

Ultimechs launches for free on Quest 2, PC VR and Pico platforms from September 15.

After many years in development, the community-made Half-Life 2 VR mod will launch on September 16. The mod will let players experience all of Half-Life 2 in VR for the first time, from start to finish. It will be available via Steam in public beta from September 16 – you can read more here.

Dyschronia: Chronos Alternate – Episode 1 launches on September 22 for Quest 2 – the first of three planned episodes. Chronos Alternate is the third game set in the Chronos universe, developed by Japan-based studio MyDearest. We got to try out a small slice of the game last month at Gamescom – keep an eye out for some first impressions later this week.

Requisition VR is four-player online co-op survival title going into Early Access later this month. The developers say they need “a couple of months to add more locations and game modes” before the full release, but you can jump into Early Access on Steam from September 22, with support for all major PC VR headsets.

And that’s our list of new VR games for September 2022! What are you planning on trying out? Let us know in the comments below.