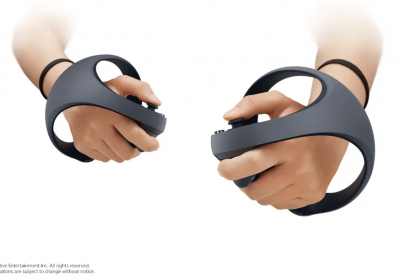 We don’t yet know the product’s name, but multiple sources tell us Sony shared details with partners. Those details include a resolution of 4000×2080 pixels (2000×2040 per eye), a lens separation adjustment dial, and gaze tracking capable of foveated rendering. A motor in the headset can be used by developers to give direct haptic feedback.

Sony previously confirmed it is developing a next-generation wired VR headset for PS5 to release sometime after 2021, and revealed the controllers for the upcoming device with analog sticks and finger position sensing, plus resistive triggers that can push back at your fingers when pressed, as seen in the PS5’s own DualSense controller.

The resolution of the upcoming Sony headset is slightly less than HP Reverb G2 (the current market leader in consumer VR headset resolution) and slightly more than the Oculus Quest 2. The resolution should amount to roughly 8.3 million total pixels, just slightly more than what’s provided by a full 4K display, though of course that’s half per eye. The new VR headset will use a USB Type-C connection between the console and headset. The PlayStation 5 features a single USB-C port on the front of the device.

The new Sony headset will use its onboard cameras to track the position of the new controllers, thereby simplifying setup dramatically compared to the current generation and unlocking more movement freedom for the player.

Though this part is speculation, it is possible that with the planned inclusion of foveated rendering, the perceived sharpness provided by the upcoming Sony headset might be much improved compared to current systems by way of supersampling the area of focus.

Eye-tracking can also dramatically change the sense of social connection made between avatars in VR. Generally speaking, the technology allows for subtler expression translating to a more profound sense of actually being together with another person in a virtual world. Eye-tracking could also be employed for other uses, such as much better throwing mechanics that take into account what a player is looking at when they release a virtual object. Demos provided by Tobii of its eye-tracking technology used in some professional-level headsets (Vive Pro Eye, Pico Neo 2 Eye and HP Reverb G2 Omnicept edition all utilize Tobii) show precisely this use case. Take, for example, this Tobii demonstration from 2018:

Sony’s PSVR headset sold more than five million units through the end of 2019, with a much-lauded halo strap design that’s been licensed by other manufacturers such as Lenovo. PSVR relies on its wired connection to the nearby PlayStation to provide processing and deliver power to the headset. The first-generation headset started shipping in 2016 with positional tracking provided by a wired camera mounted next to your play space. Controls were provided by way of either a gamepad or the Move controllers which originally shipped in 2010.

Taken altogether, the new features define a truly next-generation virtual reality experience planned by Sony for PlayStation 5 owners. The resistive triggers could differentiate Sony VR experiences while the inclusion of eye-tracking may take that technology to mass market consumers for the first time. Meanwhile, the higher resolution and easier setup would be dramatic improvements compared to the first generation PSVR system.

Facebook is expected to sell the wireless Oculus Quest 2 for “a long while” and the company’s CEO Mark Zuckerberg said recently “some other folks might try to ship something that they claim is higher quality but has a wire, and I just don’t think that consumers are going to want to go for that.” The company is openly exploring a more sensor-laden Quest Pro, with Zuckerberg mentioning in a recent interview he is interested in future Quests including eye-tracking and face tracking.

Apple is also exploring a VR headset while HTC is focusing on the business market and Valve, which shipped the high-end Index in 2019, confirmed last year it is still working on wireless solutions for VR. Microsoft supports open source efforts in VR, but there’s no indication Xbox VR is likely to happen.

While 2021 is shaping up to be Quest 2’s year selling standalone wireless VR at an unmatchable price — all-in for just $299 — from 2022 onward it may be a whole new ballgame for VR.