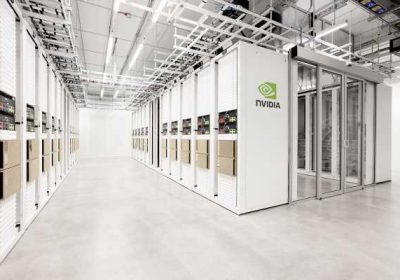 Nvidia is launching the $100 million Cambridge-1, the most powerful supercomputer in the United Kingdom, and it is making it available to external researchers in the U.K. health care industry.

The machine will be used for AI research in health care, and it’s one of the world’s fastest supercomputers. Nvidia will make it available to accelerate research in digital biology, genomics, climate science, and quantum computing.

Nvidia is collaborating with AstraZeneca, maker of one of the COVID-19 vaccines, to fuel faster drug discoveries and creating a transformer-based generative AI model for chemical structures. Transformer-based neural network architectures, which have become available only in the last several years, allow researchers to leverage massive datasets using self-supervised training methods, avoiding the need for manually labeled examples during pre-training.

“This is an Nvidia industrial supercomputer owned and operated by Nvidia, and it’s the first one that we’re opening up to public use,” Powell said. “We believe that there is a massive opportunity in the area of health as all the stars have aligned. We’ve been working on simulations for 15 years and AI is having a rapid amount of progress. We know how to build these computers and use them to their maximum capacity better than anyone in the world. And some of the world’s best researchers are in health care.”

I asked Powell if Nvidia was doing this in the hopes of convincing European Union regulators that they should approve Nvidia’s $40 billion acquisition of Cambridge, England-based Arm. But she said the supercomputer project is unrelated to that and it has been in the works for a long time.

At No. 42 on the top 500 supercomputers list, the Cambridge-1 uses an Nvidia DGX SuperPod supercomputing cluster. Nvidia hopes it could have a global impact on health care around the world and contribute to the continuing efforts to fight COVID-19. On top of that, a report by Frontier Economics, an economic consulting firm, estimated that Cambridge-1 will have an economic value of £600 million ($831 million) over the next 10 years.

If it is successful, the Cambridge-1 could be a model for other industries or supercomputers in other regions as well. It’s like a reference design or showroom where Nvidia can show off the best of its technology and get more people to adopt it, Powell said.

Powell said that Nvidia’s CUDA designs and graphics processing unit technology have enabled Moore’s law to progress a million times over the past decade, rather than just a thousand times if Moore’s law was left to itself with the normal evolution of chips. AI models have also grown at an exponential rate with the success of network architectures and the ability to train large language models.

“Over the last 15 years, we’ve literally increased the progress of modeling computational biology by 10 million times,” Powell said. “So that rate of progress is what we’re calling the super exponential. And that gives a sense of why this is applicable in the area of biology and health. And so being able to have this level of computing to work with the leaders in the health care industry is what the supercomputer is all about.”

Data for AI to understand dementia 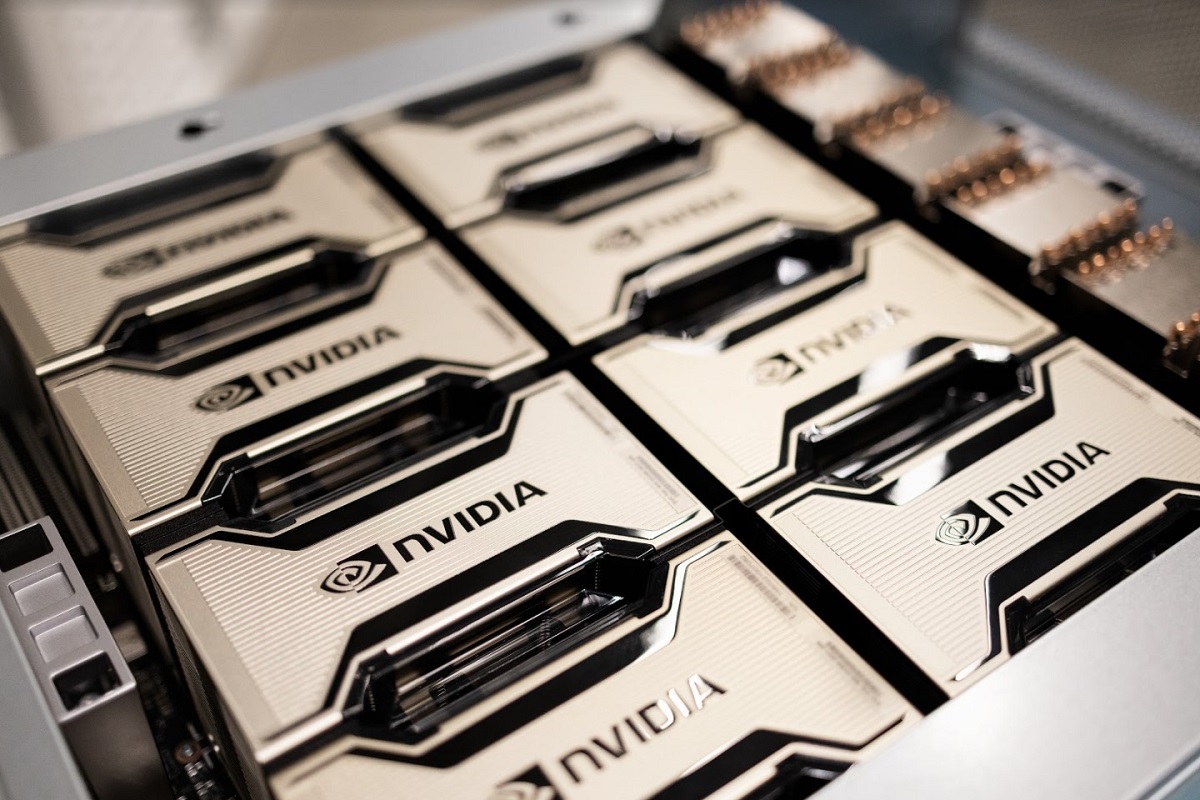 Above: GPUs in the Nvidia Cambridge-1.

King’s College London and Guy’s and St Thomas’ NHS Foundation Trust are using Cambridge-1 to generate synthetic image databases based on tens of thousands of MRI brain scans, from various ages and diseases. The goal is to use AI to gain a better understanding of diseases like dementia, cancer, and multiple sclerosis, enabling earlier diagnosis and treatment.

Early detection is imperative because existing medicines often are not able to treat these diseases given the severity of the neurological impact. This research will leverage the U.K.’s world-leading health care resources through close collaboration with the National Health Service and the UK Biobank, one of the richest biomedical databases in the world. King’s College London intends to share this dataset with the greater research and startup community.

Ian Abbs, CEO of Guy’s and St Thomas’ NHS Foundation Trust, said in a statement that AI in health care will speed up diagnosis for patients, improve services such as breast cancer screening, and support the way doctors assess risk for patients.

“It’s our investment to collaborate with the world’s leading health care institutions on large-scale computing problems,” Powell said. “Nvidia Cambridge-1 is an industrial supercomputer, and it’s going to be dedicated to AI and health care. What’s really cool about it is it’s built off of the Nvidia DGX SuperPod architecture.”

“What’s awesome about this is the DGX SuperPod architecture allows you to build datacenters in a matter of weeks,” Powell said. “The SuperPod architecture is a turnkey AI data center. We’ve already figured out the storage, networking, and compute cooling management tools because we have a digital twin of it called Seline, which is Nvidia’s industrial supercomputer.”

“We’re doing just that in health care. Not only is it a turnkey AI datacenter, it’s really a datacenter as a product,” Powell said. “The other really awesome feature to know about this is that it’s cloud native. And what that means is all the application development that Nvidia or our ecosystem does means that this system is going to get better over time. We can redeploy the full stack on these systems. So it’s going to get better over time.” 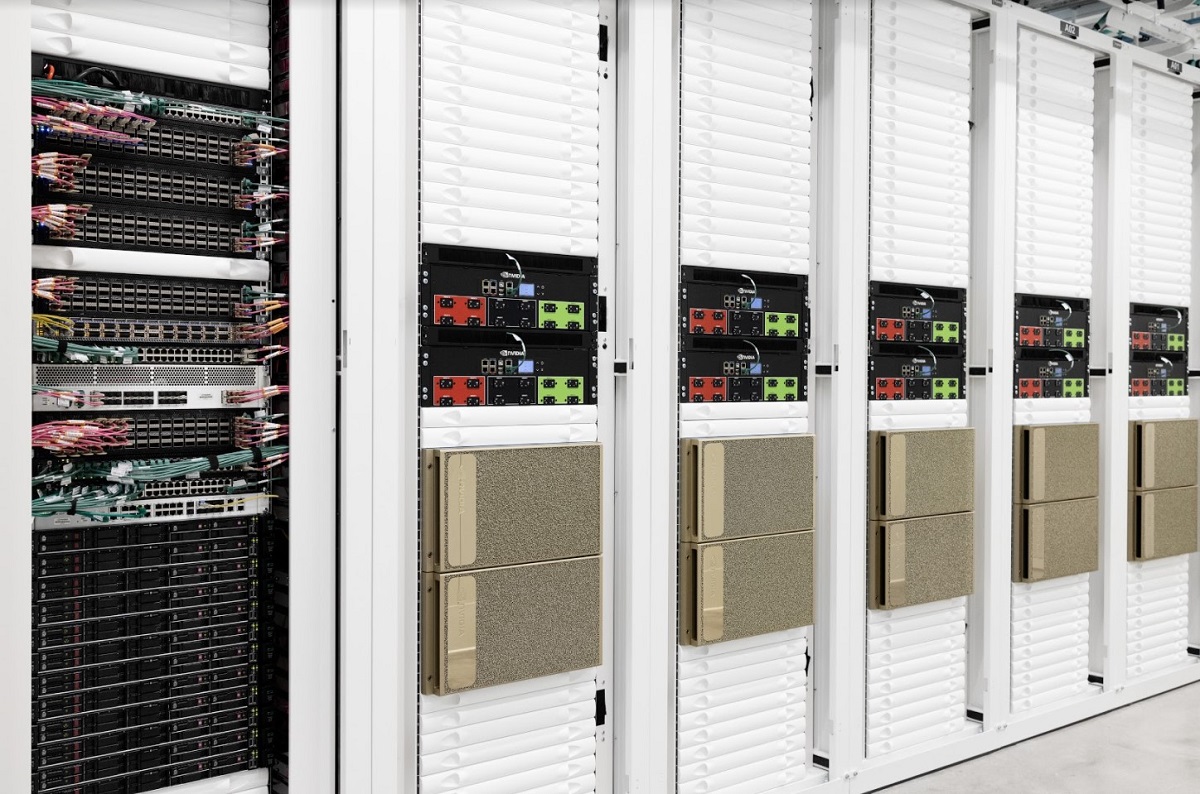 Above: The Nvidia Cambridge-1 costs $100 million.

ONT’s long-read sequencing technology is being used in more than 100 countries to gain genomic insights across a breadth of research areas, from human and plant health to environmental monitoring and antimicrobial resistance.

ONT deploys Nvidia technology in a variety of genomic sequencing platforms in the effort to create AI tools to improve not only the speed but the accuracy of genomic analysis. With access to Cambridge-1, researchers will be able to analyze the DNA samples in hours rather than days. That will help scientists gain more insights than ever before, said Rosemary Sinclair Dokos, vice president of product at ONT, in a statement.

The MegaMolBART drug discovery model being developed by Nvidia and AstraZeneca is slated to be used in reaction prediction, molecular optimization, and de novo molecular generation and will optimize the drug development process. It is based on AstraZeneca’s MolBART transformer model and is being trained on the ZINC chemical compound database — using Nvidia’s Megatron framework to enable massively scaled-out training on supercomputing infrastructure. This model will be open-sourced, available to researchers and developers in the Nvidia NGC software catalog.

Additionally, GSK is working with Nvidia to put their vast data sources to work toward the discovery of medicines and vaccines. GSK will use Cambridge-1 to help discover new therapeutics faster by combining genetic and clinical data for the next generation of drug discovery.

The Cambridge-1 has 80 Nvidia DGX A100 systems integrating Nvidia A100 GPUs, Nvidia BlueField-2 data processing units (DPUs), and Nvidia HDR InfiniBand networking. The Cambridge-1 is an Nvidia DGX SuperPod that delivers more than 400 petaflops of AI performance and 8 petaflops of Linpack performance. The system is located at a facility operated by Nvidia partner Kao Data, and it will use renewable energy.

Cambridge-1 is the first supercomputer Nvidia has dedicated to advancing industry-specific research in the U.K. The company also intends to build an AI Center for Excellence in Cambridge featuring a new Arm-based supercomputer, which will support more industries across the country.

“By improving the front end of the whole process, we’re going to definitely improve our chances of success and drug discovery going forward,” Powell said.