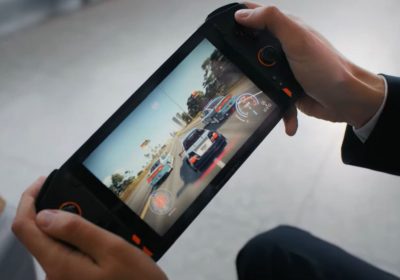 While handheld PCs aren’t exactly new, the Steam Deck has brought a lot of attention to the market, which in turn has spurred rapid innovation among would-be competitors to Valve’s flagship device.

One such Steam Deck alternative is the Onexplayer, a Windows-enabled machine that comes with a surprising number of bells and whistles. I’ve spent a week using the seven-inch Onexplayer Mini as my daily driver, and it's a handheld I’m happy to recommend to anyone who isn’t willing to indefinitely wait on Valve’s preorder list – provided the sticker shock doesn’t kill you first.

To preface my impressions of the Onexplayer Mini, the device I’ve been testing isn’t actually available outside of China. Mine is the special Gundam Edition, which has an Intel chipset and beautiful Gundam-inspired design. The product you can order today from the Onexplayer store is black with orange buttons and uses AMD architecture. The hardware differences mean I can’t speak directly to performance and compatibility. Some games that ran fantastically on my unit, like Metal Gear Solid 5 and God of War, might not work as well on the AMD version. The inverse is also true, I can’t recommend Halo Infinite or Elden Ring, which both felt sluggish and choppy on the Intel version, but might run smoothly on the AMD iteration.

What I can confidently talk about is the form factor and features, which impressed me a lot. At just 10.2 inches, the Onexplayer Mini is more than an inch shorter than the Steam Deck and a lot more comfortable to hold. It has an almost identical width to the Switch, but the thicker body and rounded back plate makes it so much easier and more ergonomic. At 619 grams I did start to feel the weight of it during long play sessions, but overall I found it to be more comfortable to play than the Steam Deck.

The quality of the buttons and I/O are hit and miss. The short control sticks feel cheap like the ones you’d find on Joy-Cons, the face buttons and directional buttons are pretty squishy, and there are no rear buttons like the Steam Deck, but I love the shape and feel of the analog triggers. They have great travel and the perfect amount of resistance that puts the springy Steam Deck triggers to shame. As far as ports go, you’ve got a headphone jack, two USB-C, and a USB-A, which unfortunately you’ll need to reserve for a micro SD card reader, since the Onexplayer Mini does not have one built in. Having a fragile card reader stick out of the top of the device is not ideal, especially when the Switch and Steam Deck have built-in readers.

Form factor aside, the thing I appreciate most about the Onexplayer Mini is the extra buttons that help you navigate windows and get the most performance out of the device. Though Proton gives the Steam Deck some unfortunate limitations, there’s no denying that using Windows on a handheld device like this is frustrating and inconvenient. The Onexplayer Mini helps this with a few extra buttons. There’s one that returns you to the desktop and one that opens the onscreen keyboard, as well as a pair of menu buttons.

Combining these inputs allows you to quickly access other windows features, like opening the task manager, taking a screenshot, and toggling Xinput mode on and off. It also has a turbo button that turns the internal fans on full blast to maximize performance, which made a noticeable difference for me while playing more demanding games. Windows is still a pain to use on a handheld, but all of these extra features are thoughtful and make a big difference in the grand scheme of things.

The $1,200 elephant in the room is of course, the price. Onexplayer isn’t outrageous compared to a high-performance gaming laptop with similar specs, but compared to the Steam Deck, it is. It would be one thing if the Onexplayer Mini provided three times the value of the Steam Deck for three times the price, but a side-by-side comparison revealed pros and cons of each.

With the Onexplayer Mini you get the flexibility of Windows and a more comfortable playing experience, but the Steam Deck has a great many features that the Onexplayer doesn’t. The hardware integration with Proton makes the Steam Deck far easier to customize without the need for so many third-party apps and technical know-how. Even something as simple as using the Gyro is simpler and more straight-forward on the Steam Deck. Valve’s device also has rear buttons, touch pads, and more substantial control sticks than the Onexplayer. The biggest leg-up that Onexplayer has over the Steam Deck is that you can buy one today.

Compatibility is an ongoing project in the handheld space, and Valve still has a lot of work to do in getting games to work on the Steam Deck. The Onexplayer Mini, on the other hand, doesn’t restrict you to only using your Steam Library. Game Pass, Epic Game Store, Battle.Net and any other marketplace you may use is open to you here, and while you can technically load Windows onto a Steam Deck too, there’s some clear advantages to having a device that was built for it. If price and wait time weren’t factors, the device I’d choose would come down to the games I play the most, which, unsurprisingly, is the battlefield for every console war that’s ever existed. Things aren’t as clear cut here as Xbox vs. PlayStation of course, but it’s obvious that both the OnexPlayer Mini and the Steam Deck are servicing different audiences, despite their similarities.

The Onexplayer Mini is not a knock-off Steam Deck by any stretch. If you’re prepared to tinker with Windows compatibility and the price doesn’t scare you away, the Onexplayer Mini is exceptional. If the next model had a built-in SD Card reader, better buttons and sticks, and next-gen AMD hardware, it may actually be worthy of the “Steam Deck Killer” title.