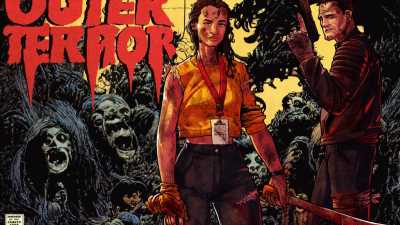 Developer Salt & Pixel and publisher VoxPop Games have revealed Outer Terror, a new arcade bullet hell with roguelite elements coming to PC soon. That’s because its release is set for sometime this year, and given there are only two months left in 2022, it sounds like we won’t have to wait too long to check it out.

Outer Terror’s inspirations are clear from the jump: pulpy horror comics and B-movie horror from the 1980s and 1990s with a dash of arcade fun thrown in for good measure. In the game, you’ll choose from one of 10 survivors to control, each with their own unique weapons and skills, to face off against waves of enemies. You can play by yourself, but you can also team up with a friend via two-player co-op.

“Whether playing solo or co-op, each playthrough of Outer Terror will give players a different experience with randomized weapons and upgrade choices, enemy patterns, and areas of the map,” a press release reads. “You thought that safe zone would be in the same spot as last time? Think again. You’ll have to slaughter your way through enemies to find it with each playthrough.”

Each of the chapters you must shoot through in Outer Terror comes with a new scenario for your character, and each new chapter brings with it increased difficulty, too. Fortunately, you can upgrade your characters’ attributes or gain brand-new ones along the way.

You can stack your weapons together and fire them at once for extra damage. Plus, you can combine upgrades with your stacked weapons for “hilariously devastating perks as you efficiently mow down cosmic baddies.”

Outer Terror launches onto the VoxPop Games Store later this year, and a demo will go live for the game sometime before that. We spoke with VoxPop Games about helping fund Weaponeer, a game developed by a 17-year-old that you can play with one hand, earlier this year so if you’re interested in the publisher, be sure to check that story out.

Here are some Outer Terror highlights straight from Salt & Pixel:

For more about Outer Terror, be sure to check out this video about how the game plays, and then watch this video detailing more of what to expect.

Are you going to check out Outer Terror when it launches? Let us know in the comments below!