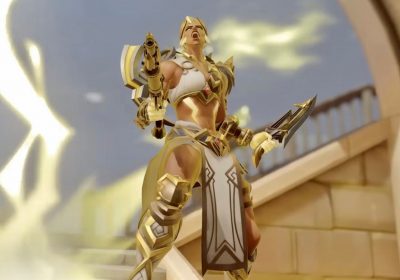 If you can believe it Overwatch 2 only came out a few months ago, but the popular online free-to-play shooter has become a firm fixture with fans as they focus on different strategies to win and sharing their thoughts on various aspects of the game over forums and social media. Blizzard meanwhile is continuing to refresh and update.

The newest limited-time event for Overwatch 2 is themed around Greek mythology and is suitably named 'Battle for Olympus'. This will be a free-for-all deathmatch with seven Heroes except they will have reimagined abilities that channel the power of the Greek gods. 'Battle for Olympus' will start January 5th and runs to the 19th. Now, let's look at which heroes will have these powers and what form they'll take.

The likes of Widowmaker, for example, will get the ability to turn opponents into stone, channelling Medusa. Junker Queen will adopt the mighty powers of Zeus as she can wreak devastation with a Commanding Shout. Roadhog can turn into a giant cyclops and shoot boulders. Reinhardt becomes Minotaur and can charge in quick succession. Pharah is imbued with the power of Hades and can shoot three rockets. Blizzard released a trailer for the limited-time event, which can you watch below:

Blizzard has a full slate of events planned for this year, and there will be a Lunar New Year limited event that coincides with Battle for Olympus as it runs from January 17 to February 6.

Meanwhile, in Battle for Olympus there appear to be repurposed armour packs dotted around Chateau Guillard, and while they don't look like your average health pack their purpose remains unclear. But since Battle for Olympus begins tomorrow, players should soon find out. Meanwhile, on map Ilios the character who gets the most eliminations during the event will receive their own marble statue.

As the trailer for the Greek myth-themed limited time event promises, players will receive "divine rewards" but these are not specified. Going by previous limited events these are likely to be titles, voice lines, sprays, and perhaps a skin. Players will be soon finding out as Battle for Olympus starts tomorrow January 5 and will continue until the 19th.