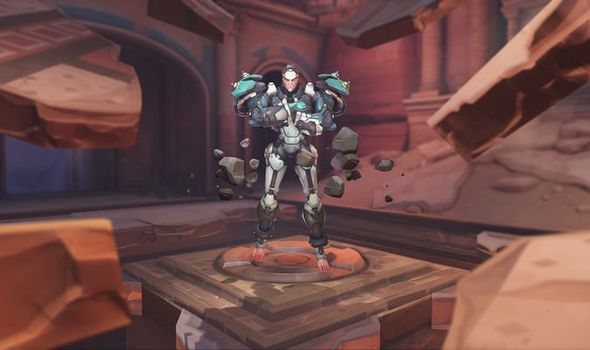 Overwatch fans on PC now have a chance at trying out the new Sigma Hero on the PTR.

This option isn’t open to fans on PS4 and Xbox One, who will have to wait until the new character’s full release date.

The new Sigma testing phase gives players a lot of new information about the scientist and what kind of abilities he will have.

As you might imagine, some of these could undergo significant changes and tweaks before the hero goes live.

The official Overwatch page for Sigma confirms that he is a new tank character with a three-star difficulty to master.

This should give long-term fans something new to try out and work at mastering over the coming months.

“Sigma is an eccentric astrophysicist and volatile tank who gained the power to control gravity in an orbital experiment gone wrong,” the official Sigma hero page explains.

“Manipulated by Talon and deployed as a living weapon, Sigma’s presence on the battlefield cannot be ignored.

“Isolated and unable to control his powers, De Kuiper retreated into his own mind. He thought he would never see the outside world again.

“When Talon discovered De Kuiper’s existence, they infiltrated the facility and broke him out, planning to use his brilliance and research to further their plans.

“In their custody, De Kuiper slowly gained control of his powers. Now, gravity moved according to his will, and he was closer than ever to achieving his life’s goal. But the same experiment that had opened his mind had also fractured it, and he struggled to keep the pieces together.

“De Kuiper continues to develop his powers in hopes of unlocking the secrets of the universe, unaware that Talon is using both him and his research.”

The new hero Sigma brings some new abilities to the brawl, which will no doubt draw certain players into its orbit.

Sigma looks set to bring a whole new dimension to Overwatch battles in the future, while also adding a new storyline to the official game lore.

“De Kuiper was considered a pioneer in his field. His life’s work involved devising a way to harness the power of gravity. Equally known for his groundbreaking research and eccentric personality, he conducted most of his studies from his lab in The Hague. Believing that he was close to achieving his goal, he performed his most important experiment on an international space station.

“But something went wrong, triggering the brief formation of a black hole. De Kuiper was only exposed to its power for a moment, but he suffered serious psychological damage. The area around him began to experience strange fluctuations in gravity, peaking and dropping in time with his reactions. He had to be evacuated immediately.

“Upon returning to Earth, De Kuiper was quarantined in a secret government facility. Between his ravings about the patterns of the universe, the psychic damage he sustained, and the gravitic anomalies happening around him, he was deemed unsafe and detained for years under the name “Subject Sigma.”