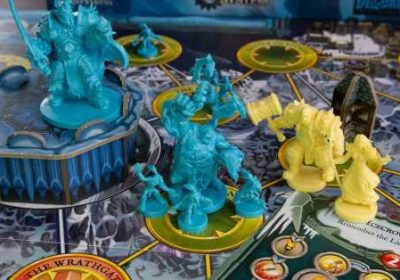 When Z-Man Games announced World of Warcraft: Wrath of the Lich King – A Pandemic System Board Game I rolled my eyes so hard it may have been audible. The original Pandemic is iconic, and the games in the Pandemic Legacy series are downright brilliant. But honestly, I thought to myself, how much more mileage can we get outta this thing?

Quite a bit, turns out. Now that I’ve set Wrath of the Lich King out on the table and simulated a full game, it really is a very clever adaptation. I’m not certain that it really evokes the feeling of the original board game, but I’m nonetheless excited to get it in front of my regular board gaming group and see what they think. Here’s how it works.

In traditional Pandemic, once you’ve got more than three cubes of contagion in one location, that location explodes, more or less, sending even more contagion into the surrounding areas. That makes Epidemics extremely bad when the board gets full of disease. Just one bad pull of the cards, and it’s game over as multiple locations explode and the world is ravaged by disease.

Pandemic creator’s new board game, Daybreak, is about climate change

Things work a little differently in Wrath of the Lich King. Epidemics spawn bigger, more powerful undead monsters called Abominations. There are only three in the box, and if you run out (meaning that you haven’t done your heroic duty and slain them yet, returning them to the pool) then the Scourge marker moves up its track. The higher up the Scourge marker goes, the more undead spawn onto the map. Eventually, the heroes are just overrun.

Oh, also? Abominations activate, moving around the map and chasing after the nearest hero. They’re quite bad, and difficult to kill, making freedom of movement a top priority. Do it right, and you can kite the little bastards into the corner of the map. Do it wrong, and you die.

Another core concept of Pandemic is using cards from players’ hands to create vaccines, effectively neutralizing one of the several different diseases on the map. Gather up four or five cards of the same suit, turn them in at the right place at the right time, and that’s one troublesome disease checked off your list.

In Wrath of the Lich King, quests take the place of diseases. Instead of gathering up all the cards and turning them in at once, players peck away at those quests one step at a time, using a combination of dice rolls, cards in their hand, and cards in other players’ hands. It evokes the same style of cooperative play as the original Pandemic, but reshuffles the elements just a bit to make it feel more like fighting in a video game. I dig it, but again I’m curious to see what my regular group thinks of it in practice.

Production value is pretty high in this one. The game board itself is big, thick, and brightly colored. Instead of dozens of wooden cubes, the game includes 47 plastic miniatures. The downside is that they’re of the old-school, PVC variety, which means some of them have droopy weapons and/or wonky bases. That means they’ll be a real pain to get painted. But the punch boards are clear and colorful, and it includes several 3D structures to boot. The game is absolutely dripping with fan service, so if you’re a huge fan of World of Warcraft, then it absolutely makes sense to pick it up.

However, if you’re looking for the next game in the Pandemic universe, I’m just not sure that this feels enough like the original to scratch that itch. You can pre-order your copy at the Asmodee website, which says the game will start shipping by Nov. 30.

World of Warcraft: Wrath of the Lich King – A Pandemic System Board Game was previewed with a copy of the retail game provided by Asmodee. Vox Media has affiliate partnerships. These do not influence editorial content, though Vox Media may earn commissions for products purchased via affiliate links. You can find additional information about Polygon’s ethics policy here.

World of Warcraft: Wrath of the Lich King – A Pandemic System Board Game