Home » News » Paper Beast Review: A one of a kind PSVR journey

Paper Beast Review: A one of a kind PSVR journey 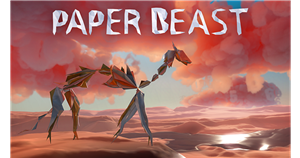 Creatures in games are rarely presented as docile, beautiful beings; instead, they are something to hunt, murder, skin for resources, or use for your own personal gain.

But not in Paper Beast, a gorgeous and enveloping PSVR experience that places you in a world filled with stunningly detailed paper creatures, that form a part of nature and the ecosystem of the simulation you are living in.

Early on Paper Beast establishes its artificiality with an opening involving calibration and a sequence set to the Japanese rock band TsuShiMaMiRe.

Reminders of your presence within a simulation filter through as the game continues via more subtle means, such as the numbers in computer code forming clouds in the sky.

However, the simulation is just the setup that allows the developers, Pixel Reef and Eric Chahi, to do some truly unique and mesmerising things with the PSVR, without being constrained to the laws of our world.

But over the five or so hour journey, these puzzles and interactions develop into much more complex tasks, such as attaching various beasts to crabs with rocks on their backs, allowing them to be pulled along in a heavy breeze and using small cubes to melt or feeze water, granting you (and the creatures) the ability to walk along the new ground.

The controls for grabbing these items and manipulating creatures are excellent, with the ability to turn manually and pull things you are holding closer to you and further away, giving you a great sense of control.

The puzzles and the way you interact with the natural environment give the game a realistic feeling, even though the game constantly nudges you with subtle reminders that you are, indeed, in a VR simulation.

Unfortunately, that realism doesn’t lead to a totally flawless experience.

Paper Beast is a game that doesn’t tell you anything (as evidenced by Eric Chahi’s previous work Another World).

Instead, you have to use your own intuition and common sense of physics and environmental ecosystems to solve the puzzles it throws your way.

The majority of puzzles provide a sense of challenge, whilst still being solvable and offering a rewarding sense of satisfaction upon completing them, but about a quarter of them are substantially more obtuse and I would even argue a few are almost impossible to work out.

This is because new mechanics are introduced with no explanation or you are asked to do something which contradicts what you have learnt up until that point.

The only reason I managed to solve some of these was by asking another reviewer who was playing it how to solve it (and they had to ask the developer themselves beforehand)… that doesn't exactly scream 'intuitive', does it?

It’s an unfortunate blemish on an otherwise extraordinary VR experience.

Paper Beast works so well because of its lack of guidance; however, at times it could really do with a tutorial or explaining itself just a little.

But, the frustration of some of those puzzles are lessened by how majestic and grand the game feels, from the way these incredible complex paper creations interact with one another, to gorgeous setpieces such as you flying in a balloon overlooking nature underneath you.

The way the game builds its universe and the number of cool things Paper Beast does makes it an excellent PSVR experience.

On top of the core campaign, there is an optional sandbox mode, where you can play around with all the creatures, plants, and objects you come across in the main journey.

This mode doesn’t offer much in the way of replayability; however, it is cool to play around with the different creatures and see how they interact with each other, plants, and objects.

You can even manipulate the weather in this mode, turning day to night and causing giant sandstorms, which in turn sends creatures flying off into the barren landscape.

Whilst a little tricky at times, Paper Beast is an experience every PSVR owner should play at some point as it is quite simply a one-of-a-kind experience.

Pixel Reef and Eric Chahi create a gorgeous ecosystem where animals, plants, natural resources, and the elements all work harmoniously to keep one another alive.

All of this is done with incredibly complex and beautiful paper creatures that you will marvel at as they walk on by you in the dry deserts and cold tundras.

And, when the simulation you are in is over, you might come away valuing the life on Earth in reality, just a little bit more.