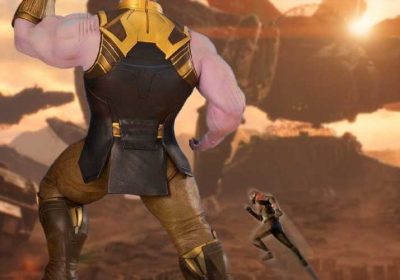 There were a lot of ideas out there about how the Avengers should kill Thanos. One of them, posed by Don Cheadle's War Machine was that they go back in time and simply murder baby Thanos in his crib. In the end, dispatching the Thanos that caused the snap was fairly easy, but one fan suggestion was completely ignored in the films: why couldn't Ant-Man shrink down, enter him, and go big again, killing him instantly?

Well, Paul Rudd, Ant-Man himself has finally answered the question. Well, partially at least. During a clip from Avengers: Quantum Encounter on the Disney cruise line, Ant-Man says, "Look. Before we start, let me address the elephant in the room."

He continues, "I've heard a lot of chatter out there asking why I didn't shrink down, go in, and uh, kill Thanos in a really creative way." The crowd giggles. There are probably rules against saying things like "blow up Thanos from the arse out" on a Disney cruise.

He goes on to say, "First of all, gross. Secondly, it's much more complicated than that. Allow me to explain." Hope van Dyne, The Wasp played by Evangeline Lily, interrupts, "If only we had the time."

So there you have it, folks. Scott Lang didn't crawl up Thanos' butt because it's gross. That's a fair enough reason, I suppose. It's a good thing he didn't, otherwise that one scene in The Boys would have been a lot less shocking. You all know the one I mean, and if you don't, go and watch The Boys.

If my recommendation isn't enough, you should know that Hideko Kojima is currently watching through after bouncing off after the first few episodes a couple of years ago. He's since revealed he had an idea for a game where a detective squad hunted superheroes, but shelved it as it was too similar to The Boys. He also shocked Jack Quaid by tweeting about his character, Hughie.