“We are working with live animals here. These are pretty much impossible to script.” And with that our tour begins, a slow pan across the milling crowds, past the education center—and then, giraffes. Three or four wander the first enclosure, heads peeking up past the walls. One splays its legs, pausing to take a drink from the pond. Nearby, a springbok does the same, with less leg-splaying.

It’s peaceful here, and I wish I could sit and watch—but we only have about 20 minutes for a breakneck demo of Planet Zoo. Alas.

One giant leap for zoo-kind

Video games advance so steadily, it’s often hard to notice the improvements except in retrospect. Measured year over year, nothing, but every five years? Or ten? Point being, a shooter in 2019 looks much the same as a shooter in 2018, but both look quite a bit better than one from 2012, and that’s the way of progress.

But when a genre disappears for a while and then resurfaces, wow. Instead of incremental progress you get to witness an explosion, a decade of potential energy unleashed. The whole timeline condenses to two data points, Where We Were and Where We Are, with nothing in between.

Enter Planet Zoo. Ironically it comes from Frontier, which also developed 2013’s ill-fated Zoo Tycoon—a console-centric iteration that stripped out or simplified most of what made the series great. Setting that one aside though, Planet Zoo is the first proper Zoo Tycoon game (albeit without the name) since 2004.

Thus we get to see how far we’ve come, and we’ve come a long way. During our demo Frontier talked up its fur shader, its eye shader, all the various technological tricks that make these animals look more realistic. Planet Zoo’s not photoreal by any means, but there’s clearly a lot of love and care put into every animal species, same as the work Frontier did on Planet Coaster recreating amusement park rides.

It makes for a builder you want to sit and watch, as much as play. Most of our demo—which is recreated by Frontier in the video above—was spent up close and at ground level, eye-to-eye with the animals as they went about their days. Some drank or ate. Others played. A few experimented with the “enrichment items” scattered around their enclosures, stripping meat off a hook or rubbing against a pole. And the cheetahs? They lounged in the sun, refusing to do anything interesting. “Very cat-like,” as Frontier’s Liesa Bauwens said. 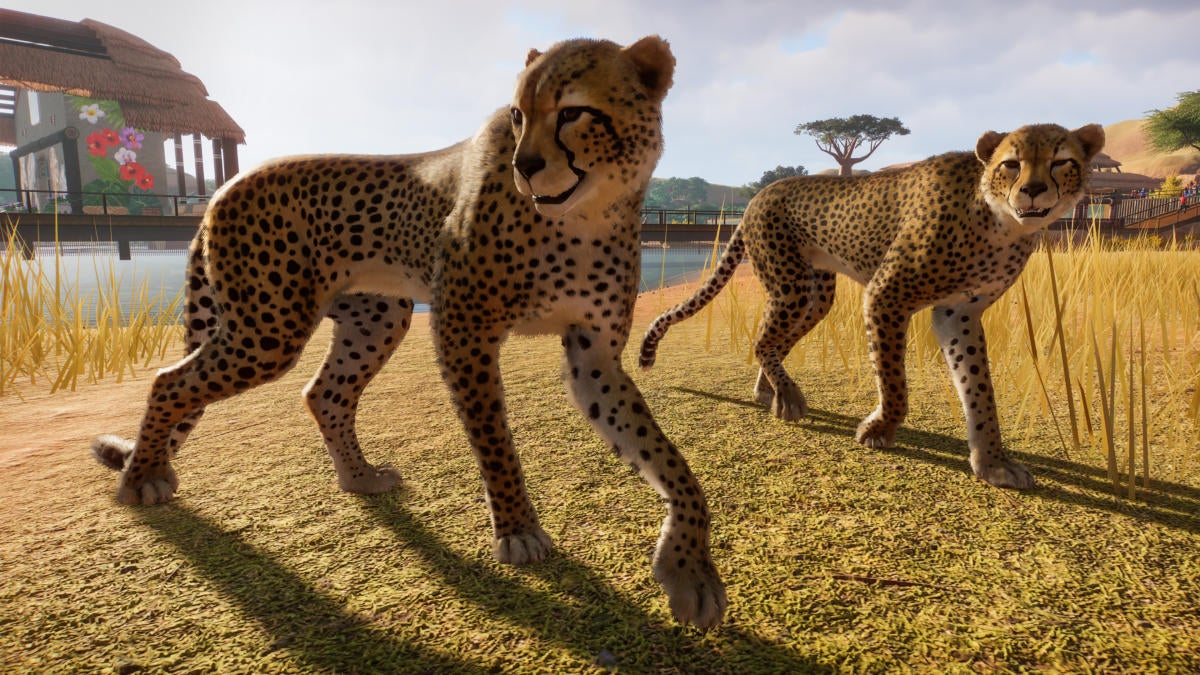 I don’t know how long that feeling will last. In my experience visual prowess always wears off sooner or later, the eye growing accustomed to this new baseline. It makes for a hell of a first impression though, and was certainly enough to sustain a 20-minute demo on its own.

Frontier brought more than shader tricks, though. While I could sit and watch Planet Zoo’s clockwork exhibits play out all day, there’s a lot going on behind the scenes—most of which we have to take on faith for now, as it’s more big-picture than this demo.

So for instance, Planet Zoo simulates genetics. Giraffes and zebras have unique fur patterns, and Frontier claims these will be passed on to any offspring. On that note, animals breed and can eventually overpopulate your exhibit if you’re not careful.

Food preparation isn’t abstracted, but done in real-time by zookeepers. Frontier’s ground-level camera also begs for interiors as well, and in Planet Zoo you can go inside Keeper Huts and watch them prep meals for the animals, or just admire the scenery. 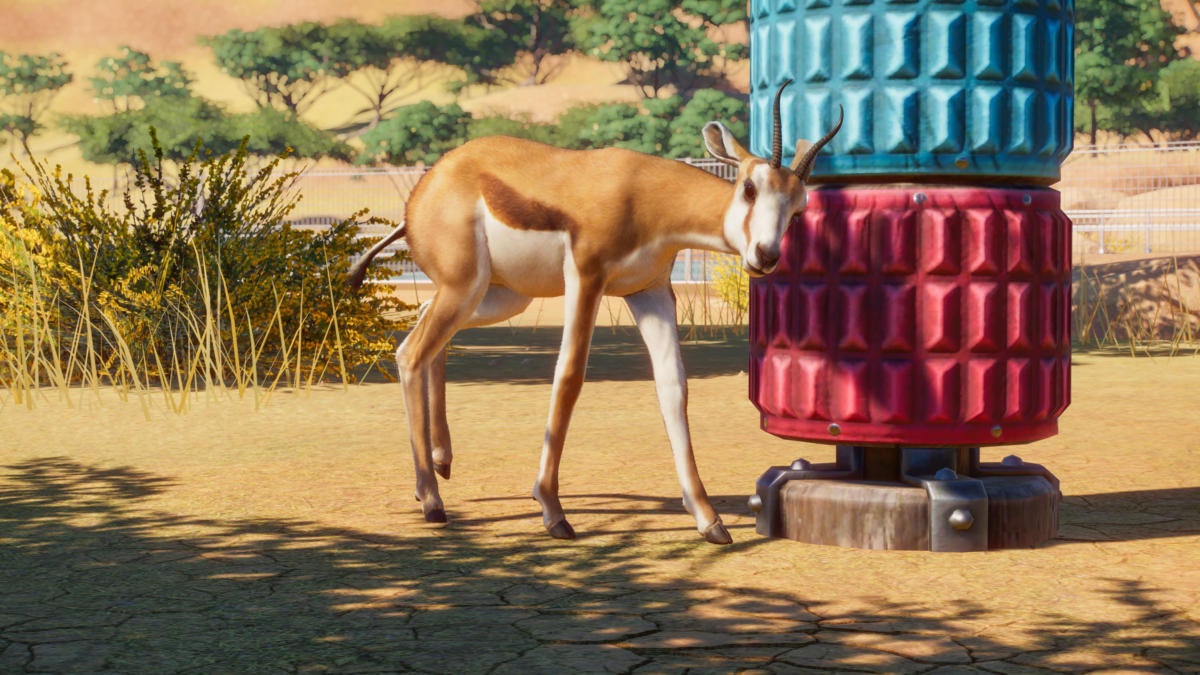 Planet Coaster’s piecemeal construction tools return for Planet Zoo. This is the feature I’m most anxious to try, as I loved laying out paths and constructing scenery in Planet Coaster’s amusement parks. Here, you construct every single element of every enclosure—the biggest improvement over Frontier’s 2013 Zoo Tycoon.

Want a pond for the animals to drink from? Or a sand pit? You build it, and each animal will prefer different terrain in their pens. Want a bunch of logs for your chimpanzees to play on? You place those one at a time, and the animals will actually climb on them—a feature Frontier says took a year to get right. There are some simple monorail-style rides you can put in for the braver guests. Staff paths return from Frontier’s more fantastical Jurassic World Evolution, allowing you to maintain the zoo-as-theme-park illusion.

It’s a mix of Frontier’s best ideas, really. Planet Coaster is primarily a game about theme park construction, light on the management aspect. Jurassic World Evolution skewed too far in the other direction in my opinion, heavy on management but very restrictive when it came to player creativity. 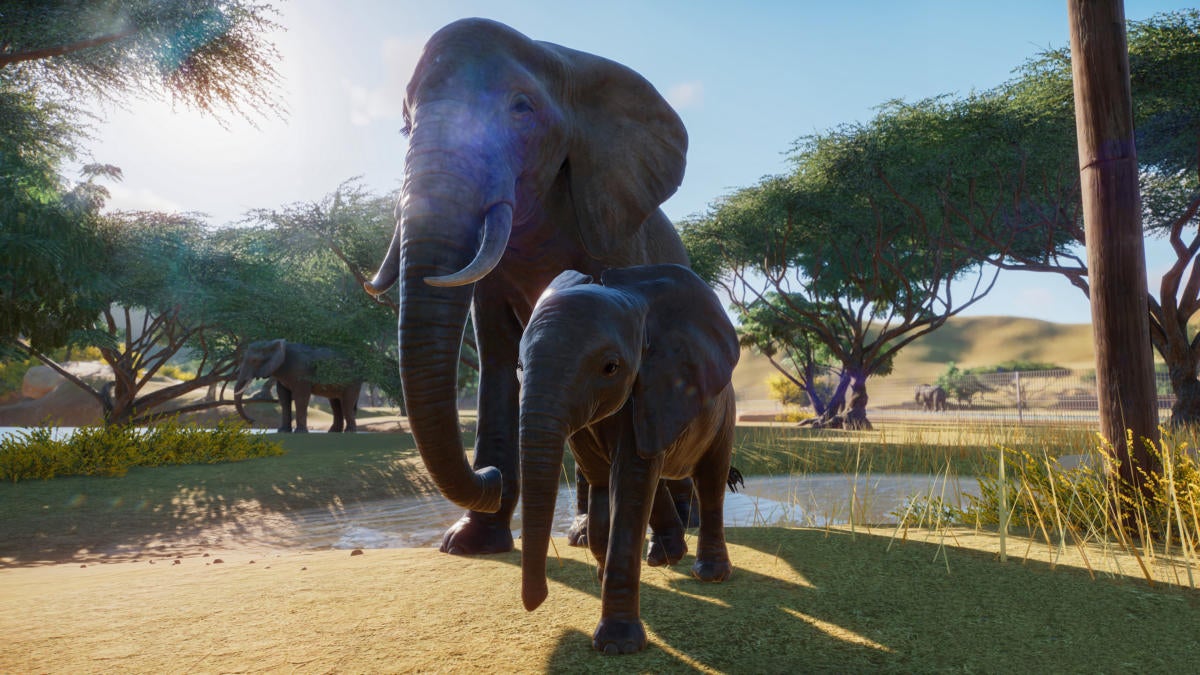 With Planet Zoo, I feel like Frontier (maybe) got the balance right. If you want to focus on creating a beautiful zoo for guests to experience, there are plenty of built-in tools to facilitate that—not to mention whatever mods end up on the Steam Workshop. But there’s a lot more substance to the management side as well, especially as you add more exhibits, more animals, and try to keep your park staff from breaking the fourth wall.

And if you just want to set lions loose upon your unsuspecting guests? Frontier hinted you can do that too—by accident even, because enclosures are hand-built. Place a tree too close to the edge of the chimpanzee pen, and your guests may have a zoo trip they never forget.

There are a few other tidbits I’d love to cover, as I had a lot of very specific questions for Frontier. Small-scale exhibits are in the game, and while you won’t construct every piece of them (like you do with larger enclosures) you can still customize their look with different ornaments—logs, rocks, and lamps, in the case of the iguana we saw. The smallest animal revealed so far is the Brazilian Wandering Spider, which has a leg-span of six inches. Pretty damn small, in comparison to the giraffes we saw. 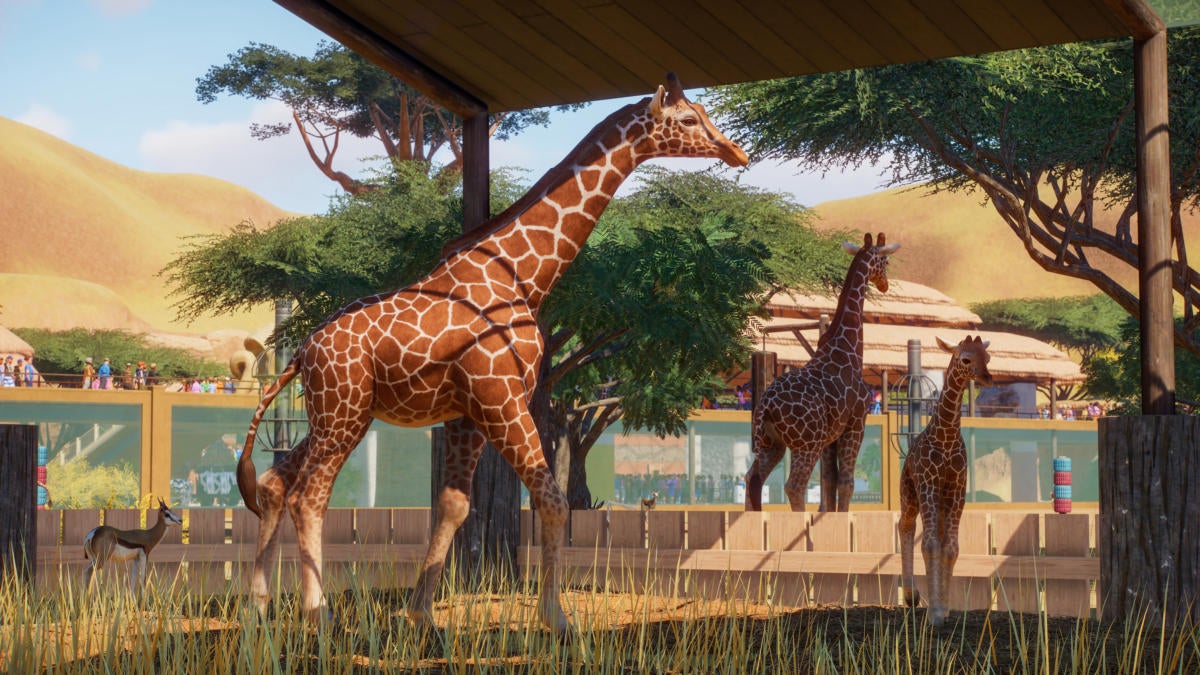 You’ll also need to educate your guests, and there’s a whole research element Frontier touched on but didn’t really show off during the demo. As you research your animals you’ll understand their needs better, and be able to put up more useful signage for your guests. While the in-game signs are all written in Planet Coaster/Zoo’s nonsense language, Planet Zoo will include a full encyclopedia that fills in actual facts about your animals as they’re uncovered.

Planet Zoo was my favorite demo at E3 2019. It wasn’t the flashiest demo, nor the most ambitious. It’s not the type of game that wins the usual “Best of E3” prestige awards, and it won’t vie for headlines with Cyberpunk 2077 and Dying Light 2 and Vampire: The Masquerade – Bloodlines 2.

But as I sat in the convention center last week and watched chimpanzees run through treetops, all I could think was, “damn, I cannot wait to play this.” That feeling’s lasted a full week now. I’m itching for Planet Zoo’s November 5 debut—and to see what post-release support looks like as well. Planet Coaster feels like a different game entirely after its myriad expansions, and I’m sure Planet Zoo will follow suit with hundreds of different animals in the next few years. It’s a costly habit, Frontier’s builders, but one I enjoy indulging.