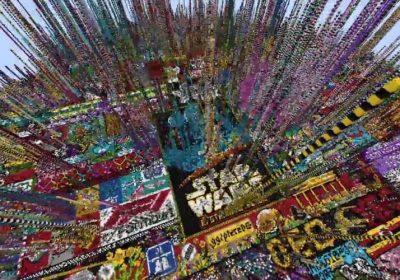 Reddit recently wrapped its r/place mural, an annual tradition that allows users to place a single tile on an enormous canvas. After placing that tile, a user gets locked out of the system for a set amount of time, making the whole thing a giant crowdsourced pixel image. Various subreddits often band together to stake a claim in r/place to ensure they’re represented in the final mural.

The end result is an organically created collage. Some images bleed into others, but by and large, it’s a collection of tiny images that all make up Reddit as a social space.

And now you can explore that social space in Minecraft thanks to Reddit user NickG365. Using arcane technologies that go far beyond my knowledge, Nick was able to take the r/place data and translate each placed tile into a voxel in Minecraft. It was all done automatically, so this isn’t just a pet project where Nick watches r/place and slaps down billions of voxels by hand.

There are also two versions of the r/place mural in Minecraft. First, there’s the flat image that basically transposes the final mural into Minecraft, and then there’s the version posted above where each placed tile actually builds on the previously placed tile. In this way, you can see which parts of the mural were contested between subreddits. The larger the spike, the more that part of the mural changed over time.

Nick performed a similar feat five years ago to keep his mind off his hospitalized father (he’s fine now!). Coming back to the project now, Nick found r/place had become “very different from a programming perspective–nothing is the same as before.” And even as he finished typing, r/place added several new colors and doubled its canvas, making the final project all the more difficult.

But Nick eventually succeeded, and you can view the finished product over at play.pickaxis.com.