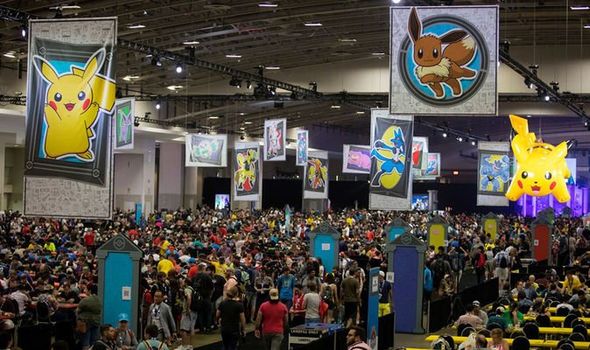 The Pokemon World Championships held in Washington DC this weekend included more than just the usual Card Game and Video Game action as past years.

The 2019 competition also gave fans the chance to see a Pokemon Go Tournament put through its paces.

There was also exciting gameplay news regarding Sword and Shield on Nintendo Switch and another little bonus for attending fans.

Not only did they get to watch the top Pokemon Card Game and Video Game players battle it out in person, but they also got to test out Pokemon Masters.

Being developed by DeNA, Pokemon Masters is a new Pocket Monster experience launching on iOS and Android devices.

It’s essentially a PvE experience, with gamers managing a team of Pokemon Masters who take on the competition in 3v3 battles while using Sync Pairs to deal more damage.

And from the time The Express Online spent playing it, we could see the potential it had to be a smash hit.

Players will be able to unlock new Pokemon Masters for their team, with over 60 being released when the game arrives in 2019.

The game itself looks great, with plenty of good animations used to make it feel like an authentic Pokemon experience.

As it’s going to be a free-to-play experience, microtransactions are going to be a thing, with an in-game currency used in a randomised loot box system.

And according to the Pokemon Masters team, the game is still on track to release during Summer 2019.

Gamespot has reported that August 29 is the tentative release date for Pokemon Masters.

But when we asked during the Championships when this new game would be available on Android and iOS, we didn’t get a solid date.

So fans will definitely want to keep an eye out for a big announcement next week. There is also a chance that Pokemon Masters will roll out slowly by region.

We also found a bit more regarding how the Pokemon Masters system will work when it comes to the community in general.

While there will be no PvP involved in Pokemon Masters, Co-op play between gamers is included.

And we now know that Pokemon Masters will have a Friends Code system, making it easier to team up and play.

This new Friends system will not be connected to other games like Pokemon Go and Let’s Go Pikachu, at least not at launch.

There is also no current plans for cross-promotion between games, with Pokemon Masters standing apart from the rest.

However, we did find out that gamers who own a Nintendo Switch will be able to use their Nintendo Console ID to track their Pokemon Masters progress

It appears Pokemon fans will be able to save and link their PM accounts using their Nintendo ID, although this feature might not be available for when the game launches.

And for anyone who was hoping for a release on the handheld system, there are no current plans for Pokemon Masters to be ported to Switch.

This was all revealed during the Pokemon World Championships, an invitation-only event held in a different location every year.

Players qualify by competing in various local, regional, and international tournaments, and this year’s champions were awarded a unique trophy, an invitation to the 2020 Championships, and a monetary prize in the form of a scholarship, cash prize, or Travel Certificate.

The 2019 Pokémon World Champions are: