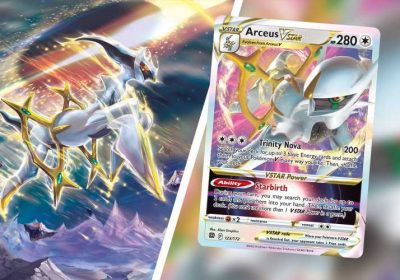 Everyone will remember the Sword and Shield era of the Pokemon TCG as the one that has the best decks ever. Nonetheless, the thing with all the top decks of this era, like The Lost Zone Toolbox, Mew VMAX or Urshifu Rapid Strike VMAX, is that they are very complicated and situational.

But then, out of nowhere, The God of All Pokemon broke into the metagame. Thanks to its versatility, simple yet effective mechanics, and ability to work like a charm with any decent offensive card strategy, Arceus VSTAR is a dangerous threat, and everyone has to be aware of them.

Let's take a look at some of the big players of the deck. 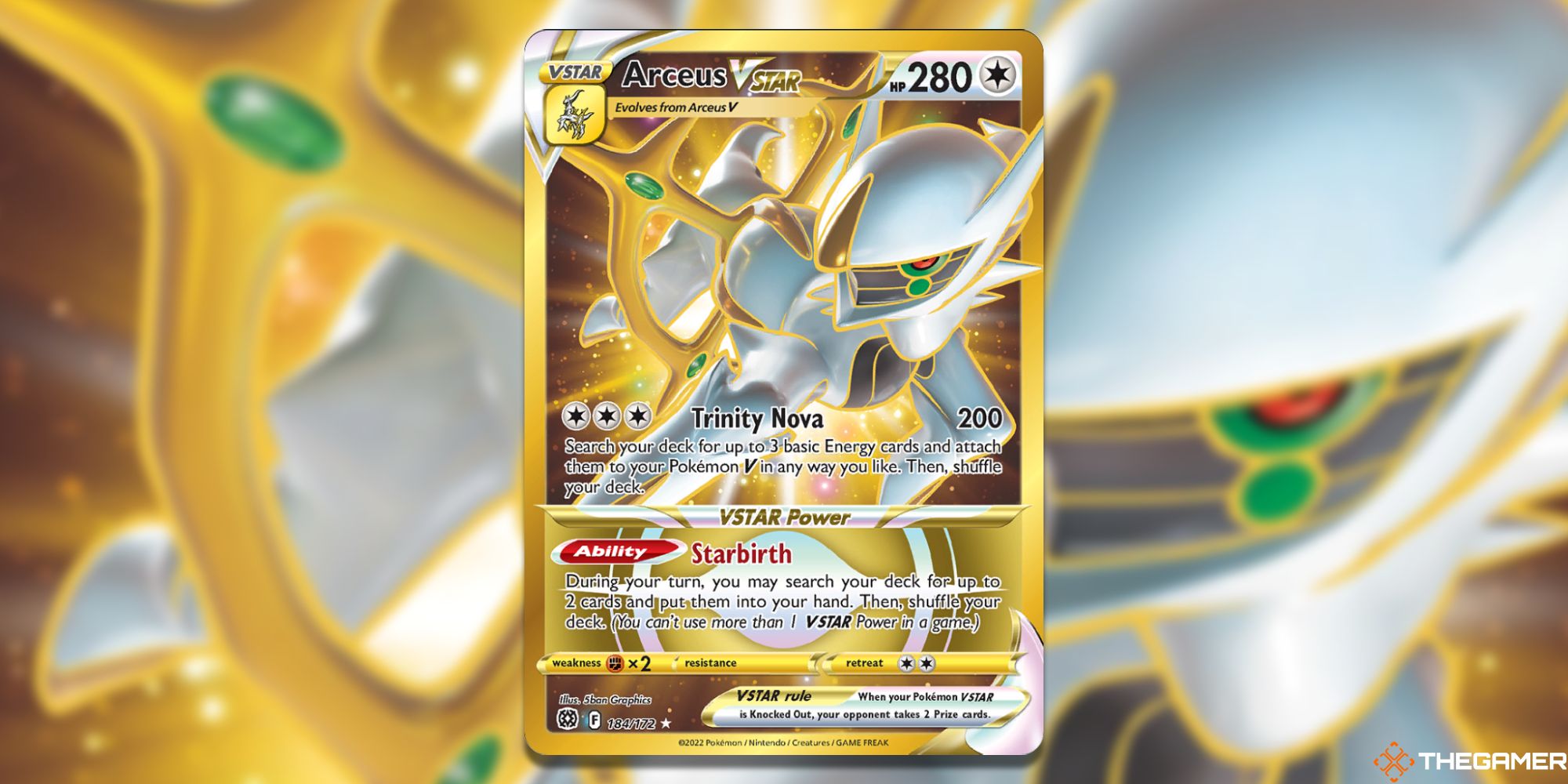 The face of this deck is Arceus VSTAR. The best thing about it is that you can mix it with almost every card and strategy available in the metagame. A famous combination is Arceus VSTAR and Duraludon VMAX, as both are tanky Pokemon that can negate a lot of damage.

Another great combination can be Arceus VSTAR and Decidueye or Miltank, as they are great responses to the damage from V Pokemon, which play a huge role in the Sword & Shield era.

But of course, the best synergy, without any comparison, is Arceus VSTAR and Inteleon. The main character of this deck is Arceus, which will deal 200 damage every turn with its attack, Trinity Nova. This attack is excellent as it lets you pick and attach up to three basic energies to any other V Pokemon, which works to prepare another Arceus VSTAR on your bench while attacking.

Arceus VSTAR's ability, Starbirth, will also help you to set it up attack in your second turn, as Starbirth will let you look for two cards in your deck. With this ability, you can look for a Double Turbo Energy and another card that can help you in the early game, such as Boss' Orders to start claiming Prize Cards as soon as possible. 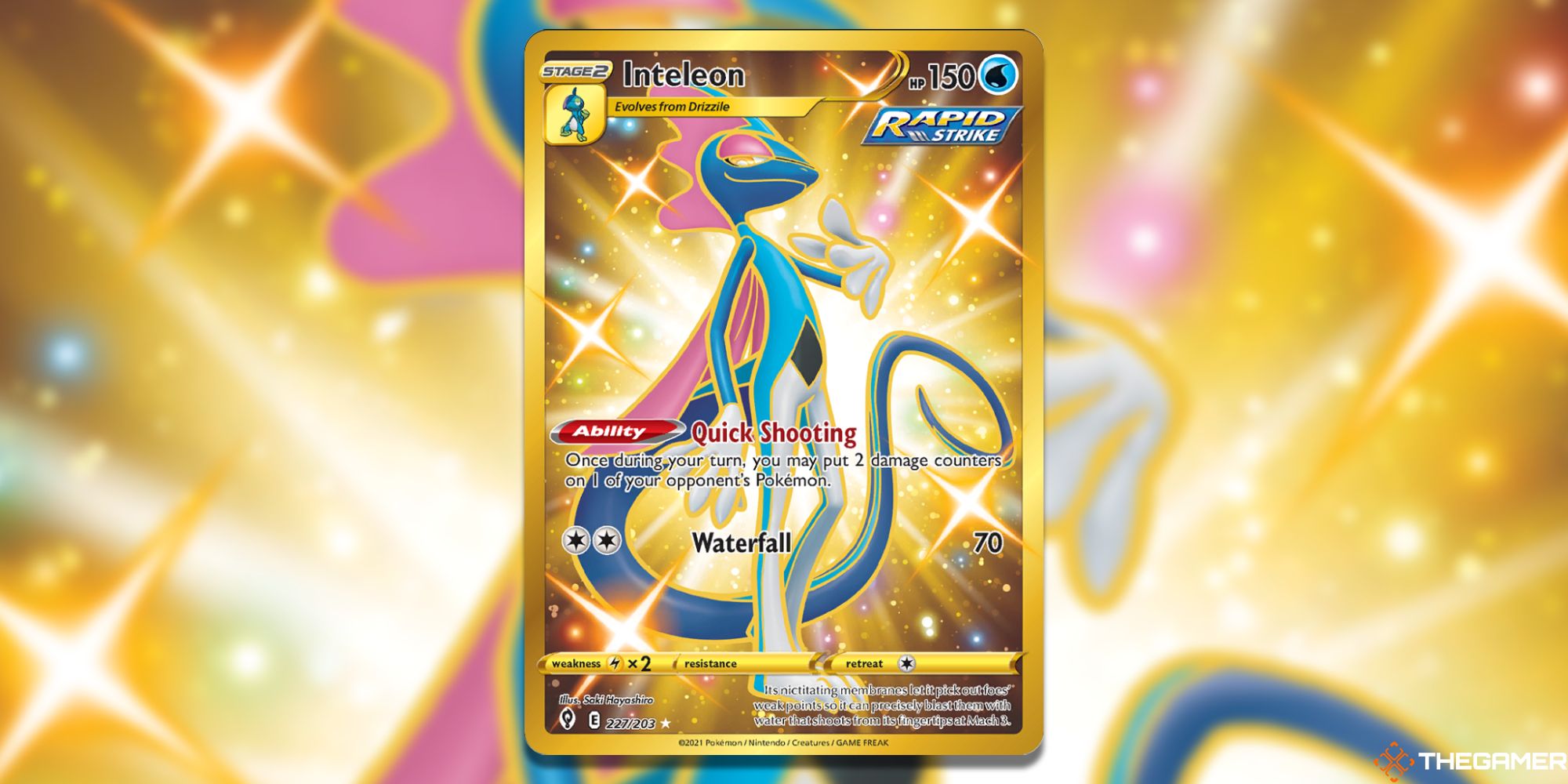 You can't underestimate Inteleon, as it'll work in the shadows to provide you with trainer cards and deal damage to the opponent's benched Pokemon.

There are two Inteleons in this deck. The one with Shady Dealings will supply you with cards to continue through the match, while the one with Quick Shooting as its ability will be dealing passive damage to the opponent's benched Pokemon. 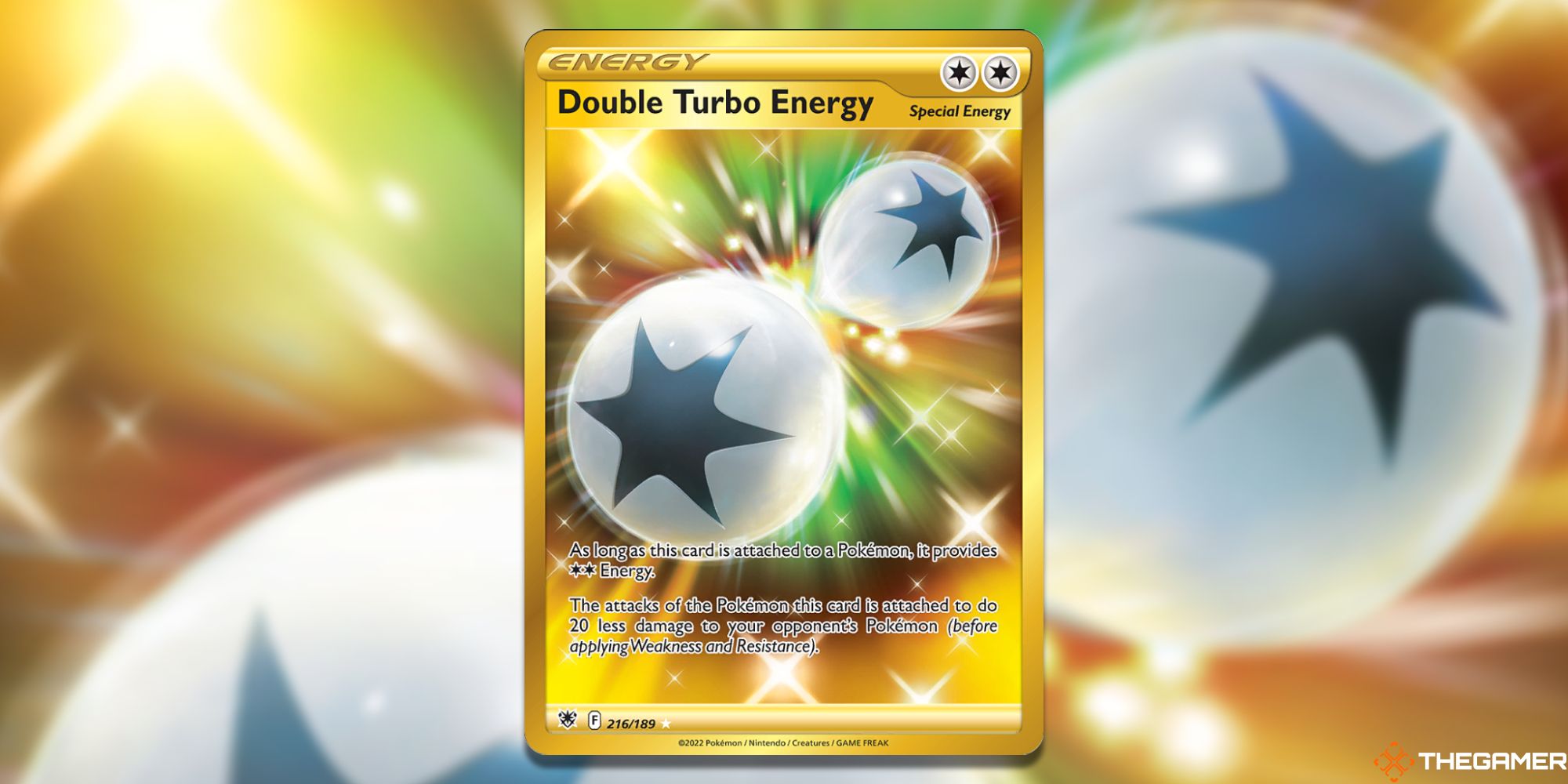 Double Turbo Energy is vital for this strategy, as it gives two colorless energies to the Pokemon attached to it. You must find and attach it to Arceus VSTAR as soon as possible.

Of course, this card has a notorious drawback, as it makes Arceus deal 180 of damage instead of 200, but as an exchange, you can potentially start to attack on your second turn, before your opponent has had time to really set up their board, which is priceless.

Scoop Up Net And Cheren's Care 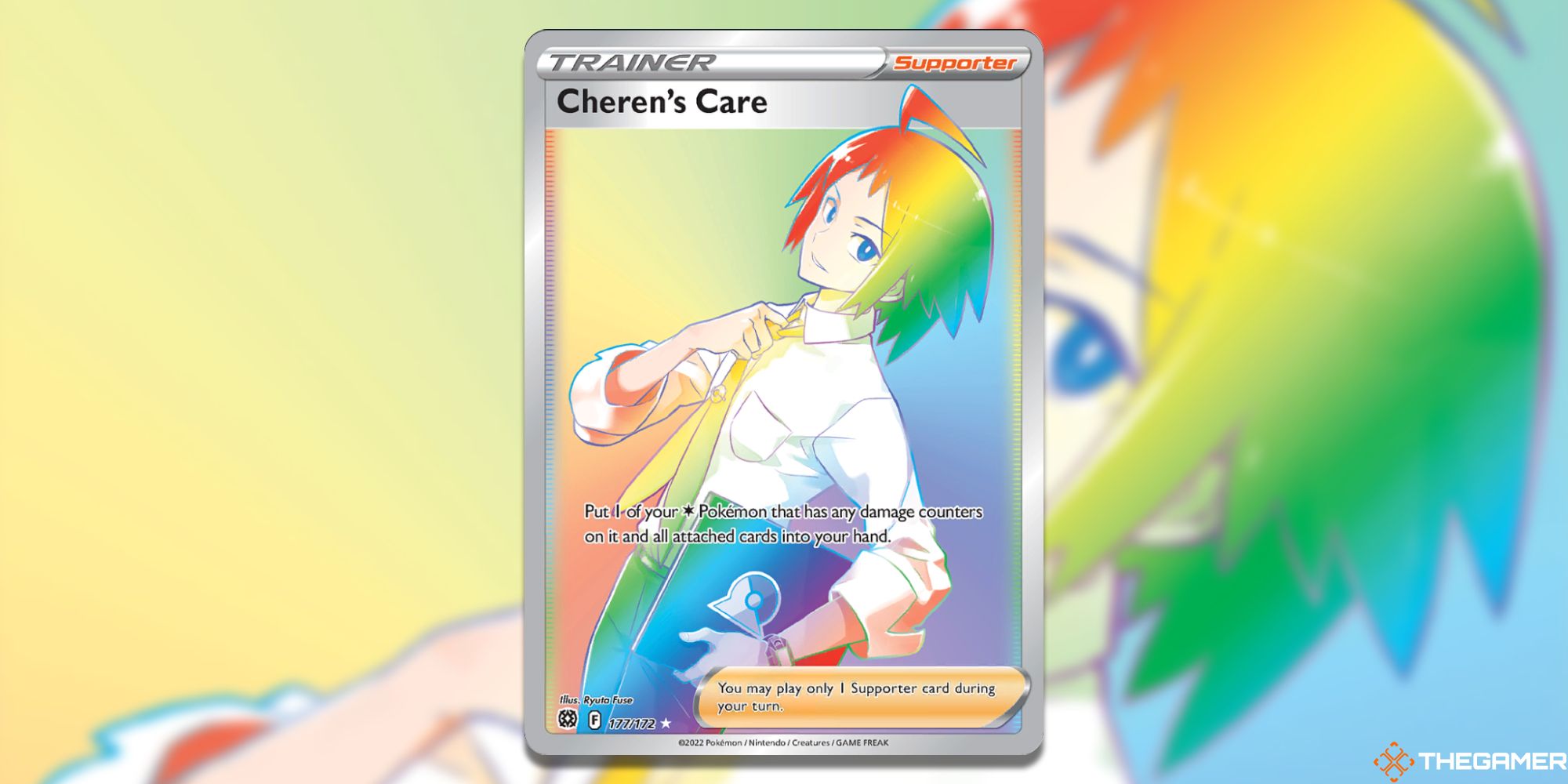 These two cards are important as they will provide the sustenance we need to keep the Trainer Cards flow running and heal Arceus VSTAR when it gets heavily damaged.

The Scoop Up Net will work to retrieve Inteleon back to your hand, so you can constantly use Inteleon's Shady Dealings. Meanwhile, Cheren's Care will work to take Arceus VSTAR out of the field, removing the energies and items the card has, but removing any damage counters, giving you the chance of denying Prize Cards to your opponent.

The Scoop Up Net doesn't work to retrieve V or GX Pokemon. That's why you must use Cheren's Care if you need to take Arceus VSTAR out of the field. 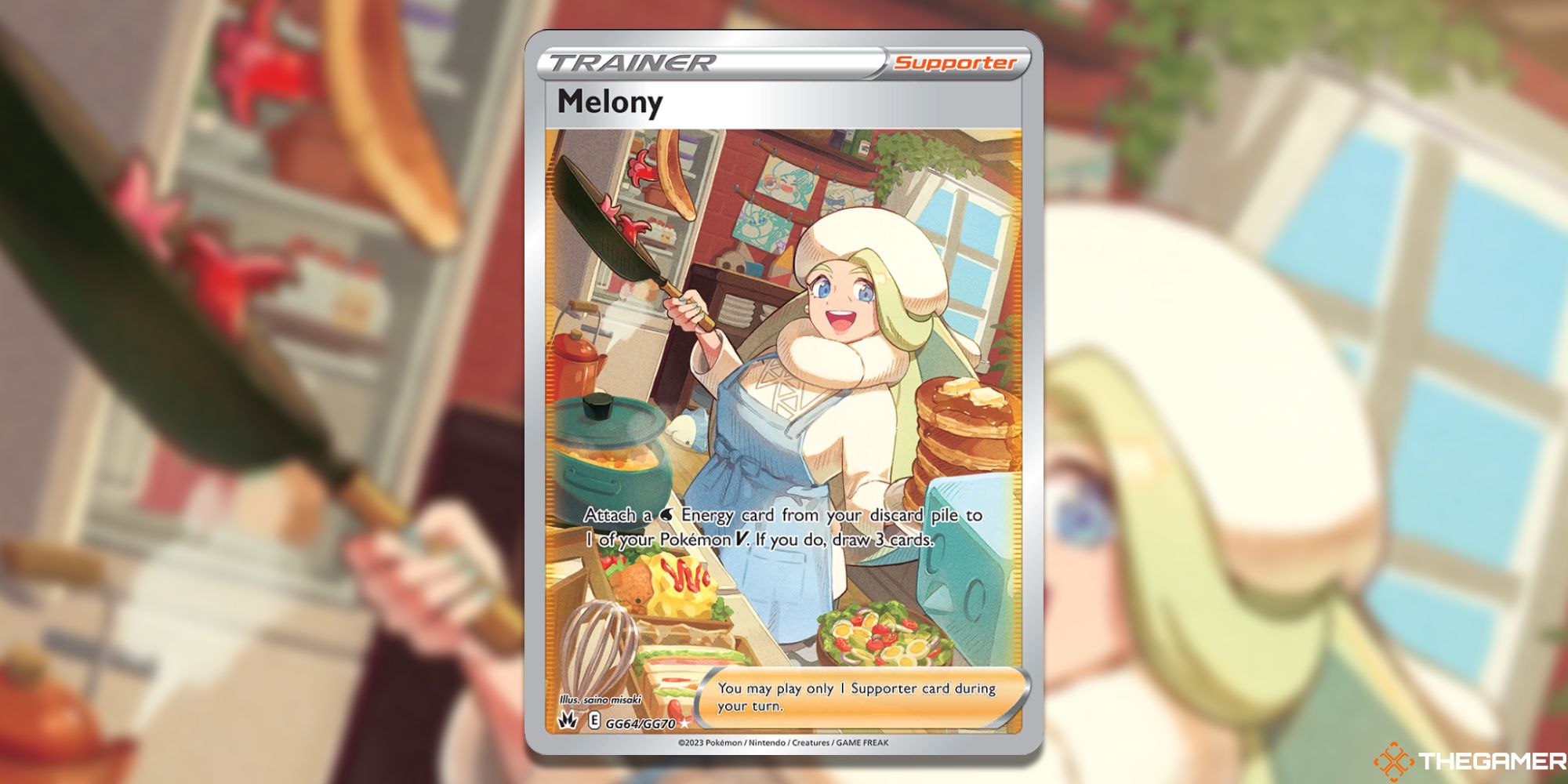 Melony will let you attach a discarded Water-type energy to Arceus VSTAR while also drawing three cards. This card can be the key to recovering from a difficult start in a match. 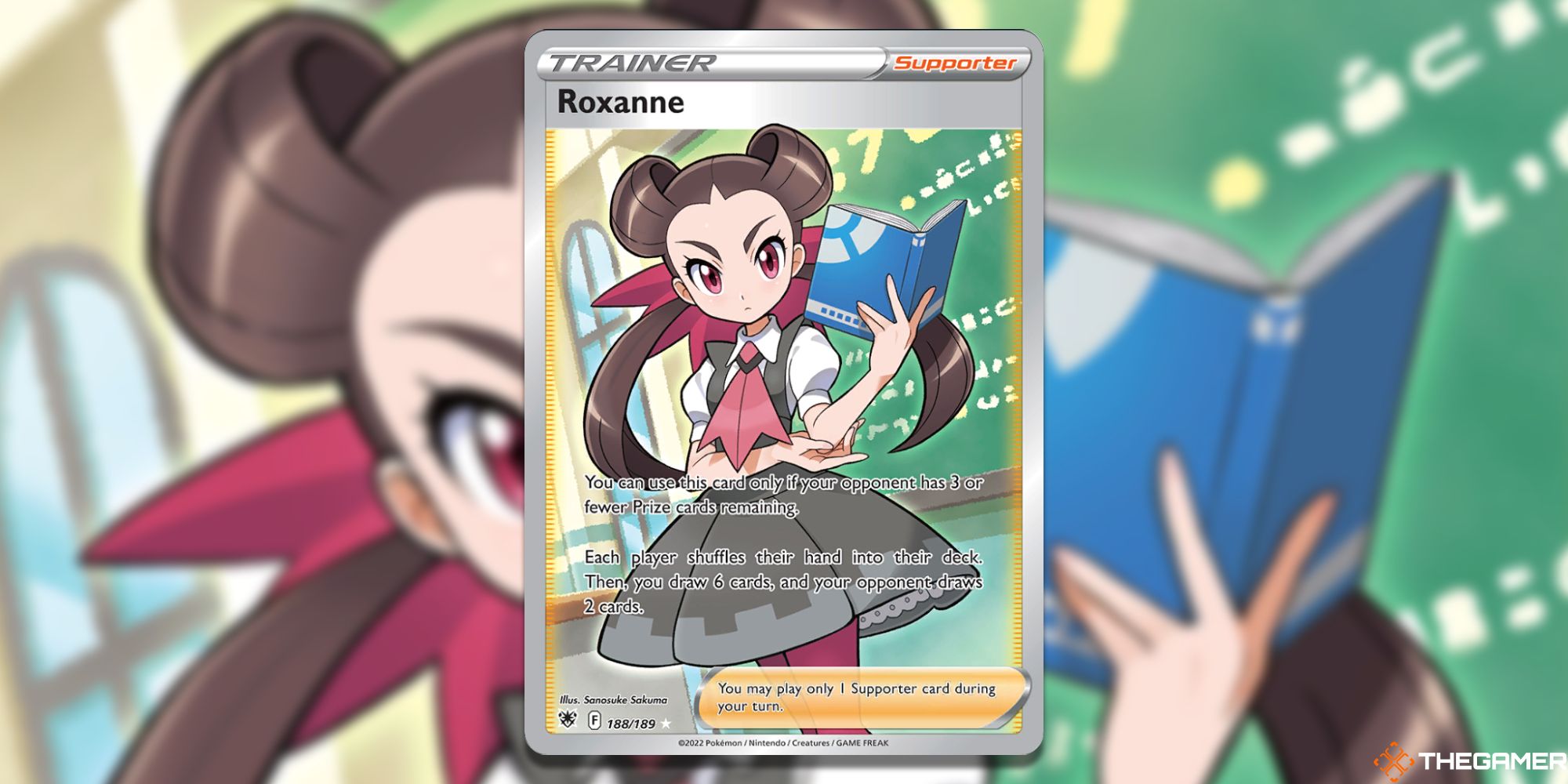 Roxanne is another important card in case you are behind in the match, as it removes all the cards from bother players' hands, sends them to the deck, and then shuffles them. Then, your opponent will only get two cards, while you get six.

You can only play this card when your opponent has claimed three or more Prize Cards.

It can't be understated how important card advantage is in the Pokemon TCG. Having more cards in your hand means you have more options to deal with your opponent, while the opposite is true for an opponent with just two in their hand.

Path to the Peak And Collapsed Stadium 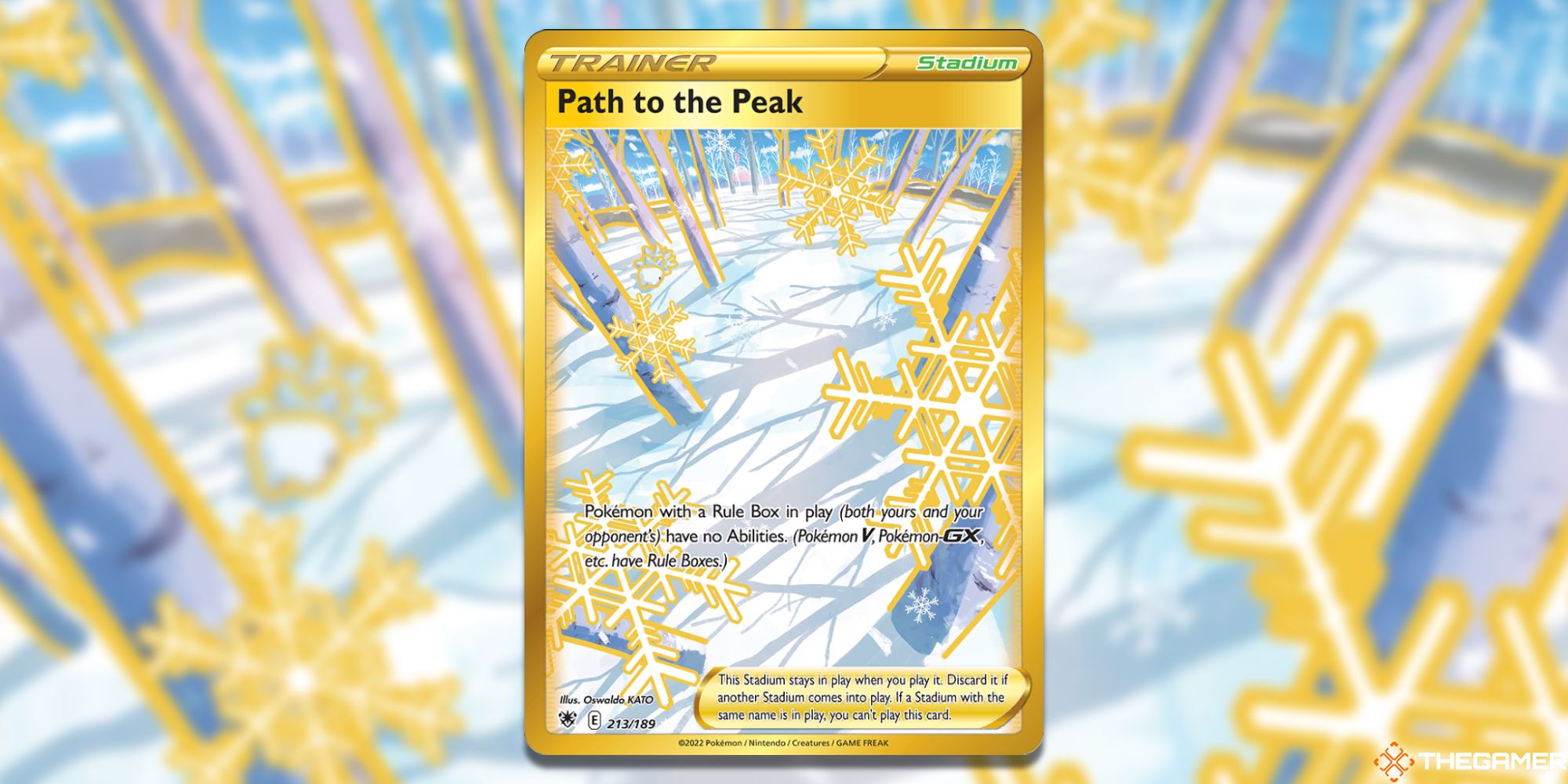 Lastly, let's talk about the Stadium Cards you'll use in this deck. Path to the Peak is the most important one, as it's a pretty solid card that deactivates the abilities of every V and GX Pokemon of the match.

Of course, you must be aware of when you should play this card because otherwise, you would be damaging your strategy. It'll be better if you use it shortly after using Arceus VSTAR's ability.

On the other hand, Collapsed Stadium can work like a charm against annoying strategies that aim to accumulate as many benched Pokemon as possible, like Eternatus VMAX and its Eternal Zone ability. 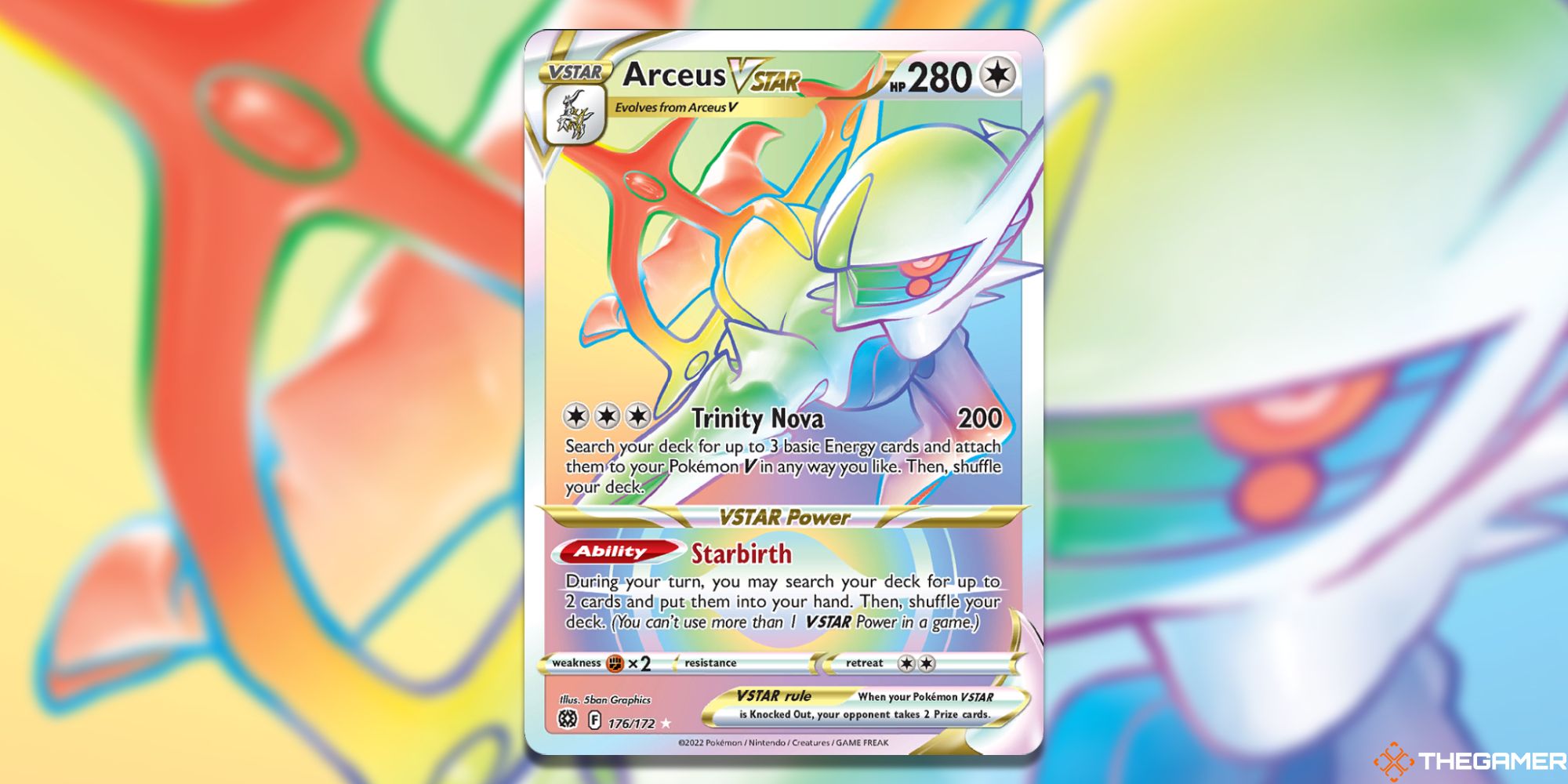 The first thing to consider is that you have to start first, as your objective is to set up Arceus VSTAR to attack as soon as possible.

Ideally, your first hand should have an Arceus V and an energy card; it can either be a Water-type basic energy or a Double Turbo Energy. If you had bad luck on your first turn, try to get an Arceus V through a Quick Ball or by switching your hand.

If you attached an energy card to Arceus and have another one in your hand, you can use it as a discarded card. Don't worry; you'll recover it through Arceus' Trinity Nova passive ability.

Afterward, try to look for another Arceus V and a Sobble through Level Balls, and put them on the bench. Try to have at least a second Arceus VSTAR with attached energies to prepare it to attack, and at least three Sobble cards on your bench. This is important, as whenever you evolve Sobble into Drizzile, and then into Inteleon, you'll use its ability, Shady Dealings, to get a Trainer card from your deck.

Try to look for cards like Cheren's Care or Boss' Orders. If you need even more cards and you discarded a Water-type basic energy, you can try to use Melony.

If you still have problems finding an Arceus VSTAR, you can look for it through an Evolution Incense.

You'll be ready to attack as soon as you set up your first Arceus VSTAR and have at least another one in the bench. If Arceus VSTAR gets damaged, you can use Cheren's Care to retrieve your active Pokemon to your hand to eliminate all the received damage. If you need extra sustainability while you search for a Cheren's Care, you can attach a Cape of Toughness to your Arceus VSTAR.

It's a great idea to use Path To The Peak in case you get trapped against Pokemon like Duraludon VMAX, or any other Pokemon that can decrease the damage you can inflict with Trinity Nova.

If you need to activate Inteleon's Shady Dealings again, but you have evolved every Sobble on your bench, use the Scoop Up Net to retrieve the Inteleon and its pre-evolutions to your hand. As soon as you do this, you can put Sobble into the bench and evolve it again. Also, don't forget to evolve a Drizzile into a Quick Shooting Inteleon while you're at it.

If your opponent uses Boss Orders against you and makes you switch to Sobble or Drizzile as your Active Pokemon, you can retrieve it with the Scoop Up Net. If you don't have a Scoop Up Net, try to evolve another Sobble into Drizzile to trigger Shady Dealings and look for it. 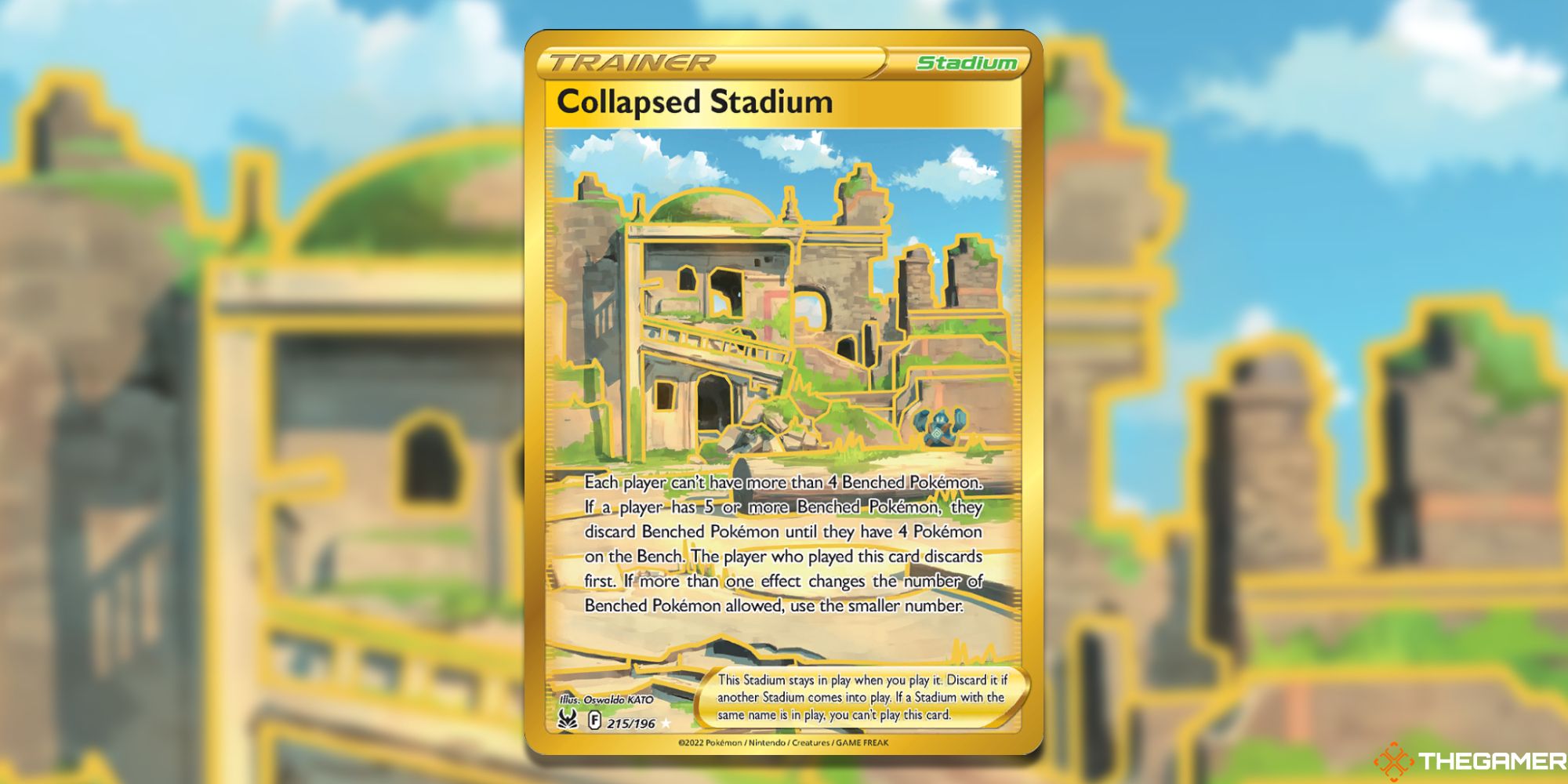 Arceus VSTAR has two main problems, the Urshifu VMAX Rapid Strike deck (or any other Fighting-Type deck), and Eternatus VMAX, which can sweep Arceus VSTAR with a single attack if you let the opponent accumulate Pokemon in the bench.

To counter Arceus VSTAR's Fighting-Type weaknesses, you can include Dunsparce on your deck. As soon as you are against Urshifu, use a Quick Ball, a Level Ball, or Arceus VSTAR's ability to look for Dunsparce. Then, bench it. That will be enough to prevent getting extra damage from Fighting-type attacks.

Eternatus VMAX is harder to counter, as the opponent can accumulate as many Pokemon as they want in a couple of turns. That's why you should add Collapsed Stadium to your deck, as it'll force your opponent to discard all their Pokemon, until they only have four available – denying them a full bench..

Alternatively, you can opt for changing the Collapsed Stadium for Avery, a Trainer Card from the Chilling Reign expansion. This card will make you draw three cards from your deck. If you do, your opponent has to discard their benched Pokemon until they only have three.