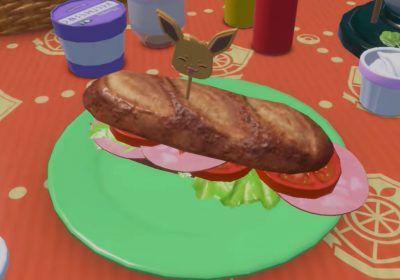 Scarlet & Violet may still be somewhat riddled with bugs, but that doesn't mean they haven't already done some good for the Pokemon series as a whole. One of the new mechanics introduced by the latest games is the ability to make sandwiches. Sandwiches that are a lot less fiddly and easier to make when you realize they don't need a slice of bread on top.

As highlighted by Fynzou on Reddit, getting that final piece of bread on your sandwiches in Scarlet & Violet can be pretty tricky. Doing so can result in other ingredients falling out – just like in real life if you overload it – and result in an imperfect sandwich. However, while perfecting their sandwich-making technique in-game, Fynzou made a handy discovery.

That top slice of bread can be dropped anywhere you like and the games will still register your sandwich as complete. “Just drag the bread all the way to the top and drop it nowhere near the sandwich. Voila. No risk of dropping ingredients,” the trainer explains. Yes, that will give you an open sandwich, but in many ways that's even better, something that has generated some unexpected and friendly arguments in the replies to the post below.

Jokes about fewer carbs and open sandwiches teasing what part of the world the next Pokemon region will be modeled after have become arguments over what is and isn't a sandwich. Someone claiming a hot dog is an open sandwich prompted a reply claiming ketchup to be a tomato smoothie, and from that an entirely separate argument over whether a taco should be classified as a sandwich or not has been spun.

Regardless of what you do or dot not consider to be a sandwich, hopefully the pointer that your virtual Pokemon snacks don't need a top slice will help you on your Paldean journey. There are well over ten million people playing Scarlet & Violet right now, and it seems likely not many of those millions will know that open sandwiches are an option.