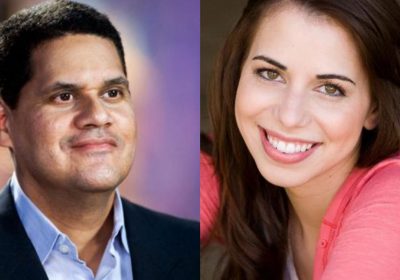 Former Nintendo of America President and COO Reggie Fils-Aime and voice actor Laura Bailey have been announced as presenters at The Game Awards.

Host Geoff Keighley made the announcement on Twitter yesterday, saying that Fil-Aime and Bailey, who previously won the Best Performance award for her role as Abby in The Last of Us Part 2, will be joining Shang-Chi and the Legend of the Ten Rings actor Simu Liu to hand out awards. The three of them will also be accompanied by musical performances, so far confirmed to include Sting and Imagine Dragons.

Keighley commented that The Game Awards wouldn't be the same without the Fils-Aime, given his penchant for hyping up audiences at every gaming event. Fils-Aime is known for coining the phrase "My body is ready!" at E3 2012. But he retweeted Keighley's announcement by saying something else to that effect: "This will be legendary!"

In 2018, Fils-Aime made his first appearance at The Game Awards, sharing the stage with Xbox CEO Phil Spencer and PlayStation chairman Shawn Layden to kick off the awards ceremony. Each of them gave a short speech on how video games bring people together to share their love for the art form, a moment that has been graciously immortalized on The Game Awards' YouTube channel. After retiring from Nintendo in 2019, he had been invited to The Game Awards a couple more times as a presenter, including for the virtual ceremony last year.

Last week, Fils-Aime hosted an Xbox roundtable to celebrate the 20th anniversary of the console and the impact it has had on the gaming industry before he even became a part of it. He even admitted that he bought the Xbox over the GameCube, and he waited until he joined Nintendo to get the latter console.

Despite no longer working at Nintendo and GameStop's board of directors, Fils-Aime fills his plate with other pursuits and projects. He is currently a professor at Cornell University, hosting a podcast for charity with award-winning games journalist Harold Goldberg, titled "Talking Games with Reggie and Harold." On top of that, he's currently writing a book about his unlikely rise to Nintendo.