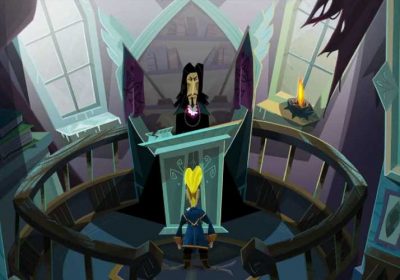 A new week, a new teaser from Monkey Island creator Ron Gilbert. These seemingly regularly-scheduled snippets have shown us portions of Return to Monkey Island gameplay for the past few weeks, and this latest one introduces us to the quirky character of Judge Plank.

The Judge appears to be presiding over a never-ending trial as series protagonist Guybrush Threepwood walks into Plank’s court already in session. Plank demands order and threatens Threepwood with contempt until he 'humbly' apologizes and makes a formal request to approach the bench. That’s when Threepwood admits to being a "mighty pirate," resulting in quite a lot of gavel pounding.

Sadly, the clip ends before we get to see the consequences of Threepwood’s confession, but we do get more Threepwood lines. We’re also introduced to a new character that will presumably play an important role in Return to Monkey Island, and we get to see the game’s dialog options in action.

These updates are also coming with some regularity, which Gilbert heavily implies to be part of some master plan. "It’s odd that #MonkeyIslandMonday happens every 7 days," wrote Gilbert in his Twitter post. "There must be some hidden pattern here."

The biggest mystery surrounding Return to Monkey Island is its release date. These clips show a game that appears to be mostly complete, but Gilbert and company have yet to provide us with a firm date. Instead, we get relentlessly teased for weeks at a time.

The Return to Monkey Island Steam store page still lists the game as coming in 2022. It'll also be available on the Nintendo Switch, too.

We used to get even more info courtesy of Gilbert's blog, but he was forced to shut down the comments after fans started leaving awful messages criticizing the game's new art style. Threepwood voice actor Dominic Armato expressed dismay at the backlash, saying he was "really surprised that there were folks who were not happy with it."