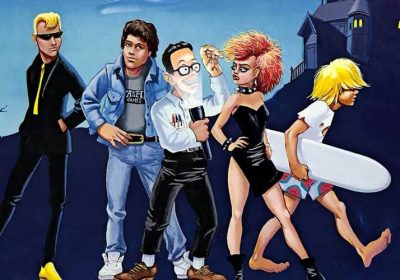 Return to Monkey Island came out earlier this week to rave reviews. Our own Meg Pelliccio gave it a 4.5 out of 5 score, calling it "everything I wanted and more."

She's not alone. High marks are coming in from critics from various gaming publications, and it's definitely caught the eye of Lucasfilm Executive Producer Craig Derrick (as spotted by Eurogamer). In a Twitter thread, Derrick responded to the critical acclaim, saying he "couldn't be happier that we're finally here. Like its creators, the game is charming, witty, introspective, absurd, and sentimental. I'm so happy that [Monkey Island creator Ron Gilbert] finally got his chance to tell this story and to have played a part in its development."

And he also hinted that Lucasfilm isn't done with Gilbert's works yet either, adding: "I'm sure more will be said throughout the weeks and months ahead, but for now, I'll be standing by when it's time to go BACK TO THE MANSION!" Derrick made a similar comment in August.

Maniac Mansion was first released in 1987 for the Apple II and Commodore 64. Another critically acclaimed series co-created by Ron Gilbert, the game would eventually be ported to the NES in 1990 and even turned into a family sitcom for three seasons. The game lets you play as several characters as they explore the Edison family mansion, solving puzzles and avoiding being crushed by tentacles.

Gilbert has also expressed interest in returning to Maniac Mansion. In July, he said that it would be "fun to do a Maniac Mansion remaster that was the same story and setting but 50% new puzzles and maybe a new playable character." So far no official announcement has been made, but if Return to Monkey Island is as financially successful as it is critically, it seems likely.