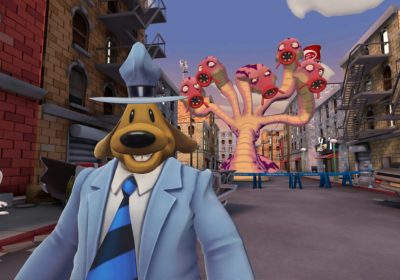 Nostalgia can be a cruel, cruel mistress. If you’ve fond memories of something from your childhood which you then encounter later in life, there’s a good chance it won’t live up to them. Remember Super Mario 64 from the ‘90s? An absolute classic, unless of course you revisit it and realise you blocked out that unforgiving camera. Or how about bringing back a videogame comedy duo like Sam & Max? Well, that’s just what Happy Giant did with Sam & Max: This Time It’s Virtual! And it isn’t the virtual entrance you’d hope for.

If you’ve never heard of Sam & Max then don’t worry, as their last videogame outing was over ten years ago in Sam & Max: The Devil’s Playhouse. This weird duo are a pair of crime-fighting detectives known as the Freelance Police, Sam being the saner hat-wearing dog and Max, a hyperkinetic rabbit. Their first adventures were point-and-click based, solving dastardly plots both on and off-world, with their own brand of zany humour.

Sam & Max: This Time It’s Virtual! Aims to bring their funny banter back to life whilst adding a sprinkling of VR gameplay. However, if you’re expecting several hours of madcap puzzling, trying to decipher some villain’s intricate plot then you’re going to be disappointed. In fact, if you’re not already a Sam & Max fan then this title likely won’t make you one.

It starts really strong, encountering them both in a city street fighting some giant alien monster to which they enlist your help, handing you a rocket launcher in the process to dispatch said beasty. After that you become their newest recruit, joining them in their office to throw a few darts and shot cockroaches with a pistol. It’s after this point that Sam & Max: This Time It’s Virtual! starts going a little downhill, not rapidly, just when it becomes clear most of the videogame is a series of basic mini-games.

Anyone even remotely familiar with VR will know the gameplay setup, a bit of physical exertion climbing walls or dodging swinging axes followed by some shooting gallery style mechanics. There are nine of these in total, completed in lots of three and all feeling rather mediocre. The one standout mini-game was the escape room which was fun even if the puzzles weren’t super difficult. After each, Sam & Max give you an A-F rating so you can come back again to improve, if you really wish to, with no progression penalty no matter your rating.

The gameplay highlights actually come in between all these mini-games where you do get to go on cases! One area involves an incident at a supermarket with demons appearing, each one needing to be dispatched in a particular method. These range from killing a cereal loving creature with milk to making a demon drink a refreshing holy water slushie. Most of the solutions are fairly explanatory but there are moments where they can be quite obtuse, even with a small finite area to explore. There is a hints section in the menu but you’re best off listening to Sam & Max who’ll provide handy clues through their chatter.

And it’s here in the dialogue, voice acting and overall comedy writing that Sam & Max: This Time It’s Virtual! really does shine. Their irreverent humour excels making it one of the very select VR few to make you giggle, nay, even laugh at points, maintaining a high calibre throughout. Veteran gamers of the franchise will instantly be familiar with the comedy thanks to some of the original Sam & Max team joining HappyGiant on the project as well as the original voice actors.

Just because some of the talented team who made the first games are present, doesn’t mean the rest is plain sailing. While generally quite interactive, the gameplay is basic. Picking up items like the milk carton, for example, you have no way to adjust how you grip it. So the carton always points the same way in either hand which looks really weird. Or woe betides dropping anything on the floor, best of luck with that, especially if you’re playing seated – it’s simpler to move on and leave it.

Then there are the bugs and glitches which make the videogame feel rushed. In one of the final boss sections, Sam’s dialogue suddenly vanished removing any clear indication of what to do next. A little further on Max needs to be thrown at the boss but don’t miss! Missing saw him fly off into the night sky never to return. Expecting some protracted joke, after five minutes it was time to relaunch the game and try again. Smaller annoyances saw items continually glitch through the environment, making some puzzles harder than they needed to be.

Sam & Max: This Time It’s Virtual! is one of those VR experiences you want to love because the characters are so well defined, amusing and likeable, even when Max is handing you a bundle of lit TNT. That’s not enough to carry the experience when a big chunk of the gameplay is either shallow or frustratingly twitchy. Clocking in around 3-5 hours, once the final boss was down that was really enough, with no desire to pop back into improve a mini-game ranking. The pictures of all the old games were kind of cool though.