Riders Republic review – jack of all trades, master of fun 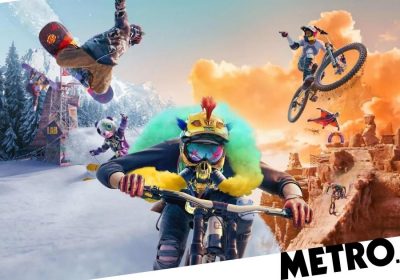 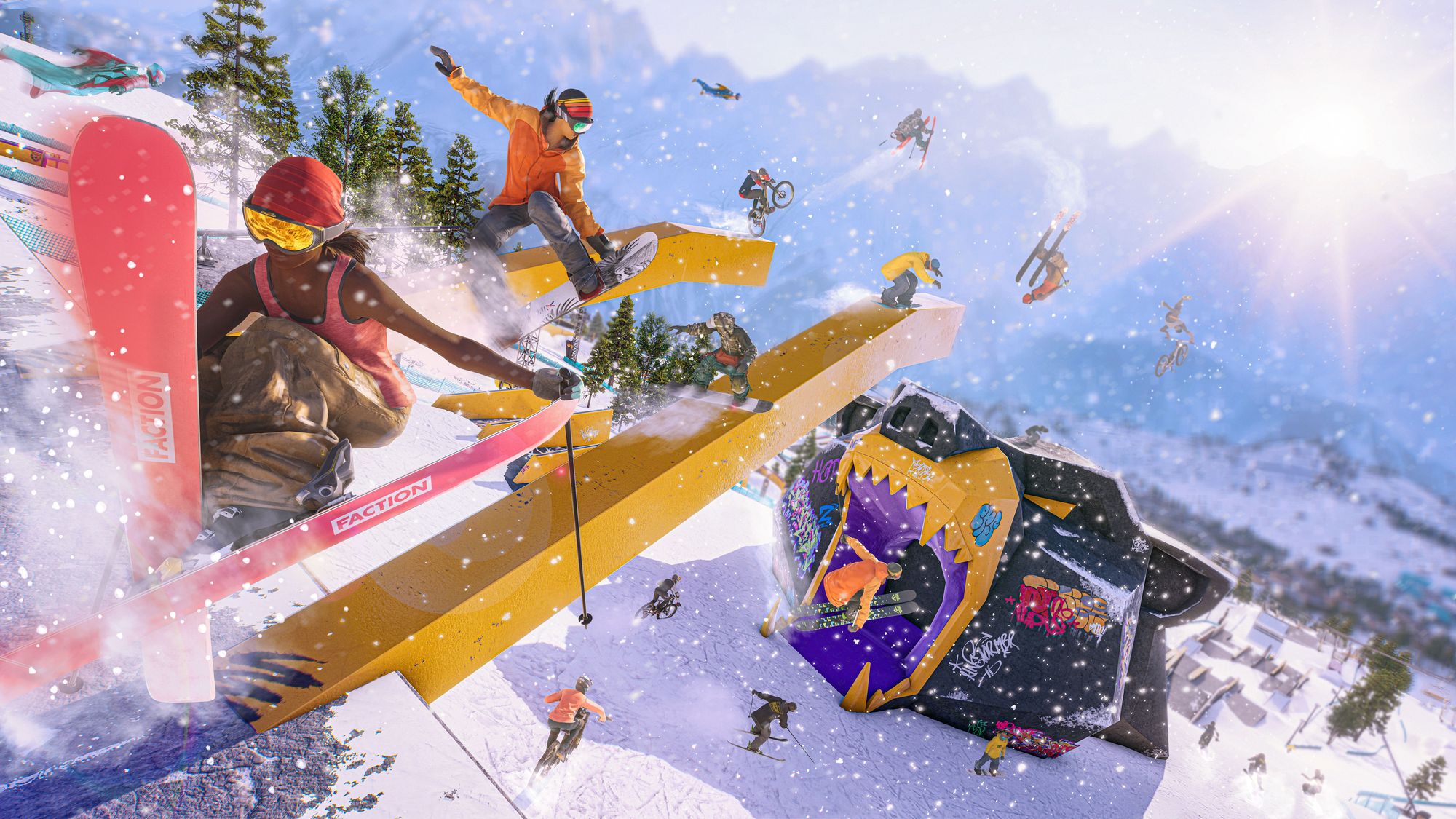 The makers of Steep create a pseudo-sequel that includes every xtreme sport imaginable, in what is one of the best racing games of recent years.

There’s a sentiment that permeates a lot of modern gaming, where the sheer enormity of new games has become demanding beyond the point of reasonableness. If you are keeping up with the slew of big games coming out most weeks, you’ll be taking on a second job. That’s to say nothing of the ‘hooked in’ nature of games as a service titles.

While there are a ton of upsides to this, with massive, high quality experiences that can stay with you and your friends for years, it can all get just a little exhausting. Every once in a while you may find yourself looking wistfully at the sunset, yearning to play games that remind you of how they used to be. Back when you were playing Tony Hawk, SSX Tricky or any number of xtreme games that ran wild in the early 2000s.

That’s the space Riders Republic is trying to occupy. Of course, it being an open world Ubisoft game, it’s expectedly enormous. Thankfully, it walks a tightrope of being very friend and accessible, while at the same time deep enough to pull you into its sponsor-laden, corporately-approved cool world. It’s also propped up by smartly applied tech that helps to get you back into the game as fast and as fluidly as possible.

Riders Republic hosts an approximation of Yosemite National Park in the US, but it also ties together woodland, snowy mountaintops, and Arizona like deserts. It’s not the sort of place you’d go looking for a nice quiet retreat though, in fact it’s exactly the opposite. You play as a thrill-seeking extreme sports enthusiast taking part in a massive, deeply unsafe, and completely unorganised event in the area. Imagine Action Park with a lot of Red Bull and an entire ecosystem as a playground, and you’re close to the health and safety nightmare that is Riders Ridge.

Once you meet up with the game’s two main characters, you find the implausible setting hosts downhill biking, mountain biking, trick BMXing, snowboarding, speed skating, trick snowboarding, wingsuits, and even jetpacks. If that sounds like a lot, it is. Riders Republic feels like four or five games stitched together in the same space, and miraculously, almost all of it is fun and fully thought out. Developer Ubisoft Annecy also made the snowboarding-focused Steep, and this is basically a sequel but with a mountain (literally) of other activities throw in.

Riders Republic is easiest to describe by comparing it to other games. It’s like SSX Tricky meets Tony Hawk meets Steep meets [insert early 2000s xtreme sports game], using the open world structure of Forza Horizon. It so specifically apes that era of gaming that it even includes All I Want by the Offspring, a song so tightly tied to Crazy Taxi, that it’s the song you are thinking of when you hear, ‘the Crazy Taxi song’.

In the game you’ll be swapping from discipline to discipline on the fly, sometimes even within a race, trying to win, but also achieving side objectives that give you stars. The stars act as the main progression system, although Riders Republic doesn’t seem overly worried about pressuring you into anything. It’s a play-as-you-want system.

Completing an event will generally open up a new event, busying the massive map on offer. It’d be overwhelming, but Riders Republic takes an extremely hands-off approach, at times to its detriment. While the variety is undeniable, at times it can feel like you are just completing objectives on the map because there is an icon there. Riders Republic has the attitude to progression of a mellow stoner, with little sense of direction for the long term.

That kind of culture permeates the presentation, albeit through a super clean, thoroughly non-controversial lens. While the game preaches a happy-go-loving, carefree attitude, when characters talk it’s through gyre of corporate-approved, made-up lingo. It never rings true and loses that, ‘doing it for the thrill’ aura by the sheer amount of sponsorship rampant in the game; Red Bull, Fox, Ford, and a whole host more are everywhere.

The cringeworthy script may have been lost in translation, since Annecy are one of the few Ubisoft studios that are actually French, but while the game’s dialogue may not ring true the gameplay certainly does. Perhaps the most impressive thing about Riders Republic is just how seamless it is. With the PlayStation 5 version of the game, load times when bouncing across the game’s enormous map feel non-existent. That also goes for restarting runs of events when trying to complete tricky side missions.

This adds an essential snappiness to the experience. If the game suffered long load times or extensive menus, it would all crumble to a slog. However, Riders Republic feels like it’s intentionally getting out of your way to let you back in and start playing. While many games pump their tech budgets into extensive graphics and ray-tracing lighting, Riders Republic uses it in smart ways that are essential to making the experience as fluid as possible.

While the game may sound like a massive Frankenstein’s monster of multiple unrelated concepts – and in a lot of ways it is – it still finds an identity in some of its weirder events. There is a whole discipline in the game set up for bizarre one-off events, be that racing downhill on a pizza delivery bike, using a speed bike to ride on asphalt, using wooden planks to ski, and using a wingsuit that is just a paper plane. It’s silly nonsense, a currency the title specialises in.

On top of that is the the overwhelming, yet still fun, chaos of mass races. These events include courses where you will switch disciplines mid-race and with the extra catch that you are competing against up to 64 online players. It’s impossible to parse at times, but it’s a good time regardless. While the corporate sheen is felt in the game’s presentation, the game still features some genuine oddness that gives it an authentic personality of its own.

Riders Republic is impressive, although it might seem a little too frivolous for those not deeply yearning for early 2000s sports games. Even so, it’s one of those titles you will always be happy to have on hand, for those times when you purposefully don’t want anything more complex or demanding. It has the depth and challenge for those who want it, but that’s not where it feels like it shines.

Riders Republic is a game that just wants you to play and have a good time, and not worry about too much else. It has the variety and tech to keep that interesting and if its corporate wrapper feels off-putting it’s well worth the effort of ignoring.

In Short: Riders Republic is exactly the game it is trying to be, with a modern take on early 2000s xtreme sports games that works in terms of everything except the corporate-mandated ambience.

Pros: All of the different sports and disciplines work very well, and all are easy to pick up and quick to get into. A dizzying array of different things to do, with multiple different game types and one-off events.

Cons: Hands-off approach can obscure progression and it all feels like it might be better off as a free-to-play game. Cringeworthy dialogue and in-your-face sponsorship.