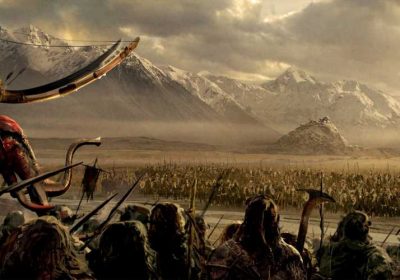 Survival game Rust is already 13 years old but it’s still going strong. It passed 12 million copies sold earlier this year, and developer Facepunch Studios is constantly adding content. That’s part of Rust’s success, but the other part can be attributed to fans creating their own content, such as one Redditor’s journey to recreate Middle-earth.

The 8K map of Middle-earth comes courtesy of Cdncasanova, who’s making excellent progress. In the middle are the Misty Mountains and in the Southeast the dreaded land of Mordor with Gondor and Rohan on its borders. Elements that are too small to show up on an 8×8 km map, such as Helm's Deep and the entrance to Erebor, are also in the works and will be present in the final map.

The idea here, according to Cdncasanova, is for this massive map to be hosted on a 1,000-player "primal only" server, limiting the craftable tech tree to just primitive weapons such as the ones you'd find in Middle-earth. Think bows, crossbows, and stone and steel melee implements like swords and clubs. Cdncasanova wants to "include everyone — the RPers, the PVErs, raiders, hardcore PVPers, Clan members, but keeping everything as close to balanced and fair as we can."

For those looking to get in on this server when it’s ready, reply in Reddit post for cdncasanova to DM server info.

This custom Rust map might be your best hope for a new Lord of the Rings MMO. Amazon Games had previously been working with Chinese developer Leyou on just such a game, but then Leyou sold to Tencent and the two giant conglomerates couldn't come to a deal regarding the complicated licensing of the Lord of the Rings franchise. The project was scrapped and now the Lord of the Rings and Hobbit gaming rights are owned by Embracer Group.