Home » News » Sea Of Thieves: How To Customize Your Ship

Sea Of Thieves: How To Customize Your Ship 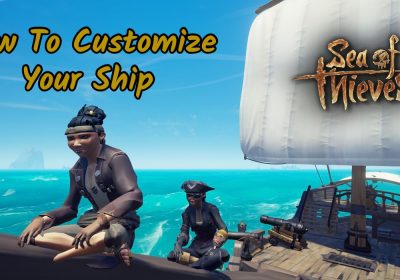 So you’ve been sailing the seas for a decent amount of weeks in a boring looking sloop. The basic ship design, along with other beginner customization options, make you an easy target. People know you won’t know how to fight or they may not even see you as a threat. You gotta look threatening and intimidating to survive the Sea Of Thieves.

There are multiple ways to acquire cool sails, cannons, figureheads and more. Each method requires you to put in some work to collect experience, hours, or money. Having an epic looking ships lets other players know you’re not an easy target and may make some people scared to approach you. It’s also going to make your ship look pretty which is always a plus. If you’re playing the game normally and for a long amount of time, you’re bound to get some goodies by accident.

Level Up Your Pirate For Free Rewards 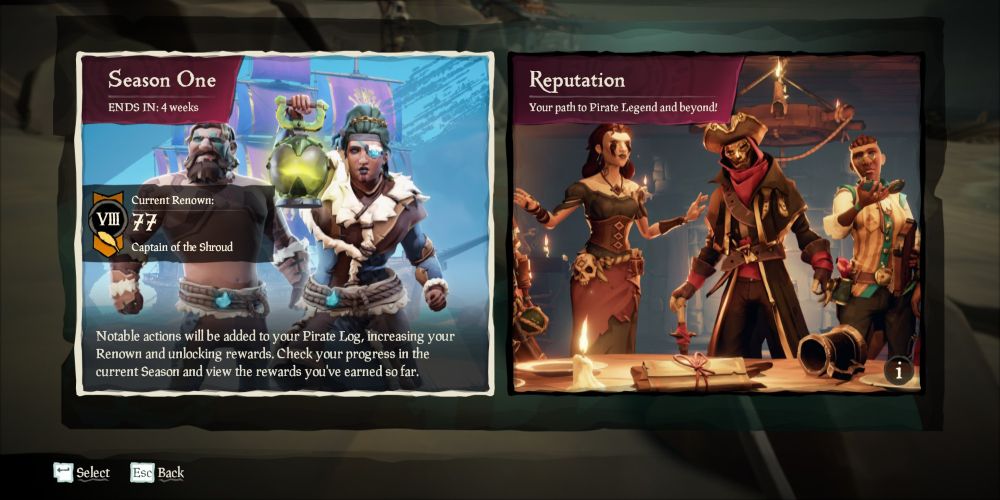 Rare has introduced season passes to their game like many other video games before them. The good thing about these Sea Of Thieves seasons is that you don’t have to purchase the pass to get cool items. There’s a free version that is automatically being leveled up as you play. All you have to do is do your normal quests PvP or not and you’ll find yourself randomly earning currency and find a cool sword in your equipment chest.

The free rewards you get without paying for the pass are worthwhile and not chump change. You can get clothing sets, weapon skins, and every different type of currency can be earned in it. Earning these doubloons and ancient coins will help you save up for ship cosmetics at other storefronts.

Buy Cosmetics With In-Game Money At An NPC 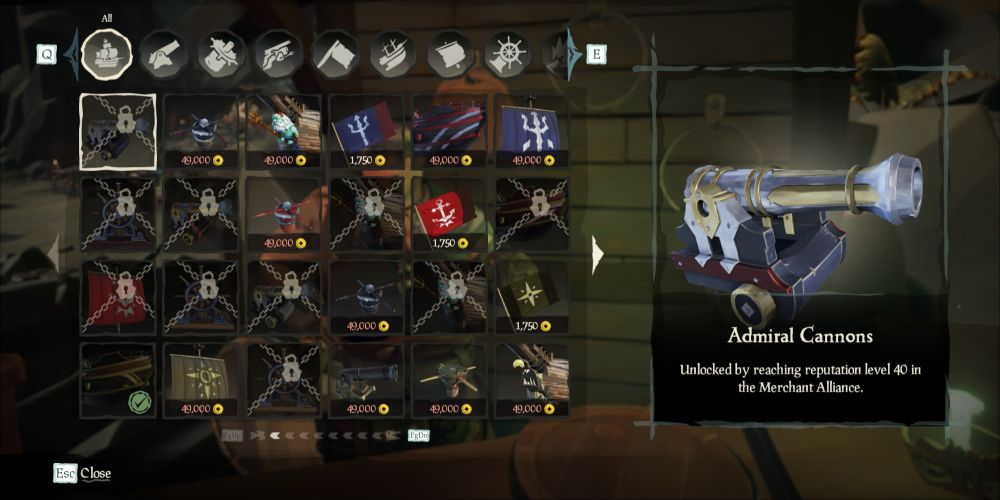 The shipwright NPC that you can find at the docks of any outpost sells all ship cosmetics. She will be the larger female next to more barrels with a bigger shop than the other dock worker. Here you’ll find out that ship cosmetics are very, very pricey for beginner pirates.

Once you get the hang of the game and have a lot of money, you can ration your money and buy the goodies you want. Some people prefer to customize their ship over their pirate. This shop contains all basic cosmetics, some of which need to be unlocked by gaining reputation and levels with emissaries. Emissaries are trading companies that you’ve been buying quests from. Upgrading your voyages with them and doing more of their work allows you to unlock more cosmetics. 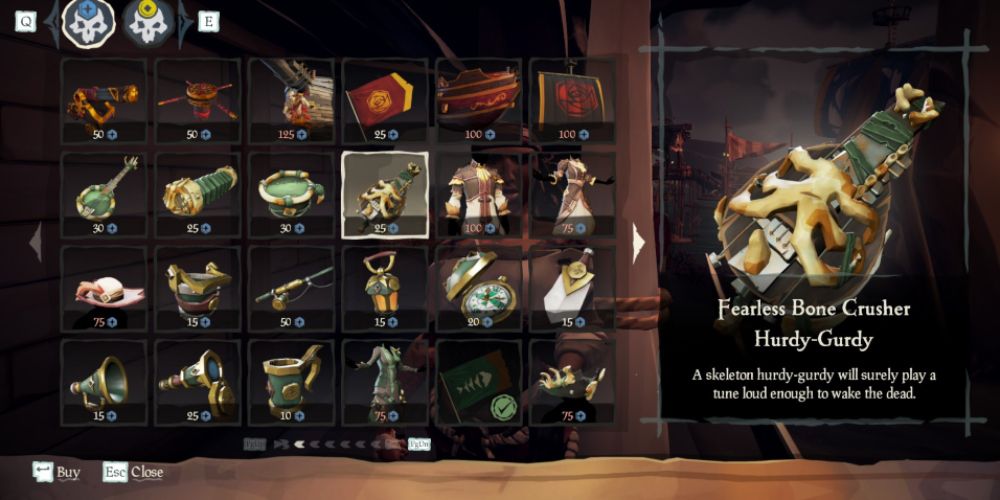 The next store that sells ship cosmetics is the Black Market. The lady, known as Larinna, that’s standing outside of the tavern at any outpost sells special goodies for a different kind of currency. Bilge Rat Doubloons. Or blue coin thingies. When you speak to her, select Black Market Archives to find the store.

Here you can spend Doubloons for ships, equipment, and clothing cosmetics or you can use normal currency in the other tab. The other tab uses regular coins, but they are even more pricey than the shipwright if you can believe it. This tab contains different cosmetics than the Doubloons store. You’ll have to save up money and do a lot of emissary voyages to get a full ship set from here, but it’s worth it. You can earn Doubloons from a variety of things. You gradually earn them in the free season pass, by selling ritual skulls and Ashen chests to Larinna or the Reapers at the Reaper Hideout.

Get The DLC Packages With Ancient Coins 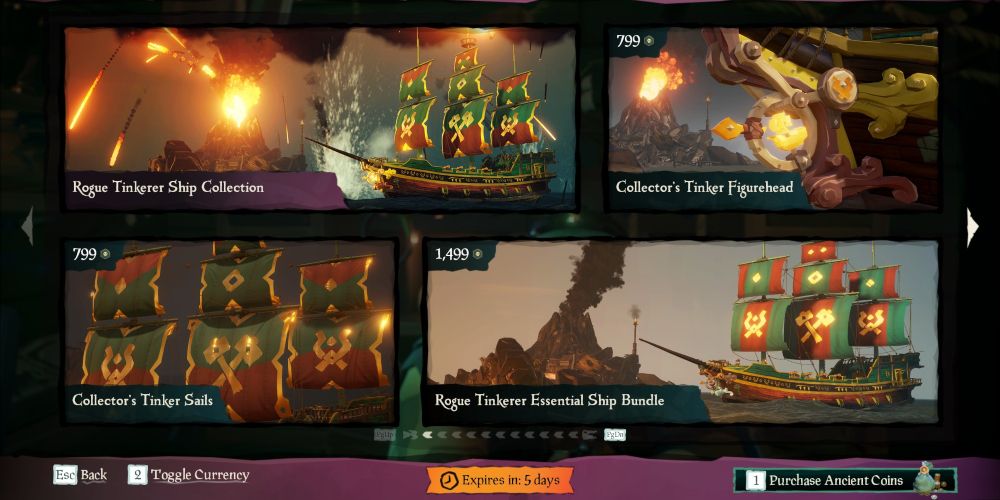 The last option is to use Ancient Coins. It seems like you have to pay real money to get Ancient Coins, and you sure can, but you don’t have to. You also gradually earn them within the free season pass. You also get them from a very, very special skeleton that only sometimes spawns on islands. This skeleton will look blue and have something attached to its back like a backpack. These Ancient Skeletons are rare. Either way, it will take longer to earn lots of Ancient Coins but you will find yourself getting around 125 at least. If anything, the amount you naturally earned can cut the price of how much more you purchase with real money.

Next: Sea Of Thieves: Every Type Of Shopkeeper And What They Sell