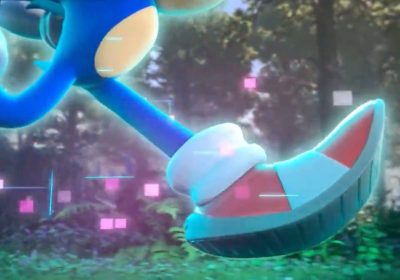 Sega and Sonic Team have teased a new mystical Sonic game that’s scheduled to be released in 2022.

At the end of the Sonic Central stream that was broadcast Thursday, Sonic Team head Takashi Iizuka stopped Sega’s global chief brand officer Ivo Gerscovich from ending the stream too soon to tease one last thing: a new mainline Sonic game. As of this writing, Sonic’s official social media accounts have not posted the teaser trailer for the new untitled Sonic game, but Twitter user @RedMakuzawa was nice enough to provide a screen-recording for those who blinked and missed it.

The teaser trailer shows Sonic, whose head is covered for some weird reason, running through the forest like normal, only to have his body surrounded in a neon cyan glow. After stomping on the ground in slow motion, he blasts through the forest and circles around it, leaving a magical trail light reminiscent of the icy fire gecko from Frozen 2.

The end of the teaser shows what appears to be a hieroglyph, giving us no title whatsoever. For the next year — give or take what month they want to release the game in — the title of the next Sonic game is a mystery because that’s for Sonic Team to know and for us to find out.

The fact that this new mainline Sonic game is coming out next year establishes a pattern that Sonic Team started during the franchise’s 25th anniversary five years ago: announce a new mainline Sonic game within that lustrum milestone anniversary and set its release date for the next year. Unless, of course, the pandemic forced them to use the 2022 release window as a placeholder.

In other Blue Blur news, Sonic Central has announced a bunch of other new Sonic goodies to tide us over, like Sonic Colors Ultimate, which was originally leaked from a German website but is now confirmed to be the real deal, with skins inspired by the Sonic the Hedgehog movie to boot. There’s also going to be a series of animated shorts based on the game titled Sonic Colors: Rise of the Wisps, which will feature voice acting unheard in the previous Sonic shorts series, especially with Roger Craig Smith returning as the voice of Sonic.