Sink Your Teeth Into The Maneater: Truth Quest DLC, Launching This Summer 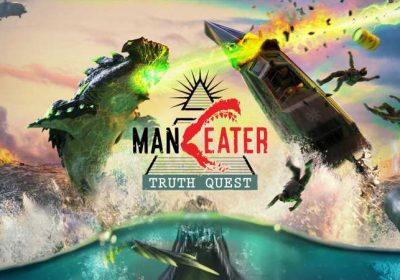 Developer Tripwire Interactive has announced that its surprise 2020 hit Maneater will be receiving a DLC expansion this summer. Titled Maneater: Truth Quest, this new DLC pack will continue where the story of the original game left off and see the titular bull shark battling more humans to uncover the truth behind a conspiracy surrounding Port Clovis and the NWO.

Chris Parnell, famous comedian from Saturday Night Live and Rick and Morty, will reprise his role as investigative journalist Trip Westhaven and will follow players down the rabbit hole of twists and turns that await. It seems the original game’s plot is being treated as a government coverup and Trip is ready to bust the myth via his ViewTube channel “Truth Quest.” As such, the shark will need to feast and players will get to rampage through an entirely new area.

Sean McBride, creative director at Tripwire, said, “The team has been hard at work on Maneater: Truth Quest and we’re excited to announce the first details on the downloadable content that so many fans have been asking for.” To that effect, this expansion will feature a brand new region to explore, two additional story chapters, more boss fights, and new evolutions to undertake.

The full details include an increased level cap up to 40, five new organ evolutions (with an additional slot), a maximum shark size increase, the “Uber” Apex Predator enemy, tons of new wildlife and military forces, helicopters to chase you across the sea, different objective types, and extra time trials. The DLC pack will be launching for PC -via the Epic Games Store-, PS4/PS5, and Xbox One/Series X for $14.99 / €14.99 / £12.99. No exact date has been given, but players can expect the additional campaign sometime in Q2 2021.