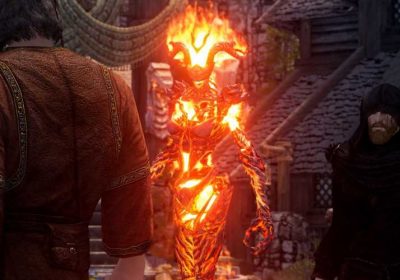 In real life, if you saw an undead walking around you'd probably be more than a little shocked. But even if you lived in a world where werewolves, vampires, dragons, mages, trolls, and the like were often waylaying you in the countryside, you'd still probably react if a body raised from the dead was walking through town. And yet, Skyrim's NPCs don't so much as bat an eyelid when a necromancer is doing their bit in Whiterun or wherever. Now, a new mod rectifies this glaring oversight.

The 'NPCs React To Necromancy (And More)' mod has made a splash with the enthusiastic Skyrim PC modding crowd since it was uploaded, and has been downloaded more than 12,000 times at the time of writing. It's paying off for the modder, one JaySerpa, and deserved since it looks like a fairly well developed modification.

"Despite what the game and lore says, most often than not NPCs don't really react to necromancy in any way. You can walk into town with a corpse and no one bats an eye," reads the mod page. "With this mod, NPCs will now react in ways that reflect their bias against those that openly practice the dark arts".

As the modder observes, the conjuration scholar Phinis says that Nords dislike magic and that one shouldn't summon atronachs or similar near them, and that under no circumstances should corpses be resurrected near towns as it is especially frowned upon. "However, NPCs barely react to anything you summon, so I thought vanilla could use a bit of polish," they write.

The 'NPCs React To Necromancy' mod adds around 150 new reactions, which have been made by splicing the base game's dialogue. Some thought has gone into this mod with relevant NPCs reacting but ones such as Mages or those familiar with conjuration are sensibly excluded. And it's not just necromancy, other types of summoned creatures are also covered with specific lines. As for compatibility, the mod "does not edit a single vanilla record" so it should be compatible with everything, according to JaySerpa.

The mod page also describes a number of consequences too, including how it might affect your relationships with NPCs if you're walking around town with your skeleton or similar. Those interested can check out the mod on Nexus Mods here.