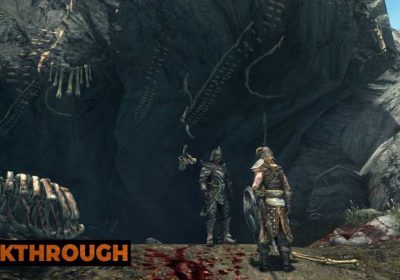 Adventurers traveling through the Rift may find an orc stronghold being assaulted by a giant. This encounter is easy to miss thanks to the stronghold being located far to the south of Skyrim. Getting involved in the incident will get you familiar with another Daedric Prince and get you another powerful artifact.

Like many deals with the supernatural, coming out on top will not be easy. While this is a challenge of martial skill more than cunning, you may find yourself struggling against some of the giant foes standing between yourself and the tribe's redemption in the eyes of their god.

Updated November 20, 2022 by Nicolas Ng: This article has been updated to bring it in line with the rest of our walkthrough, with new images and tips to help you fell the giants. 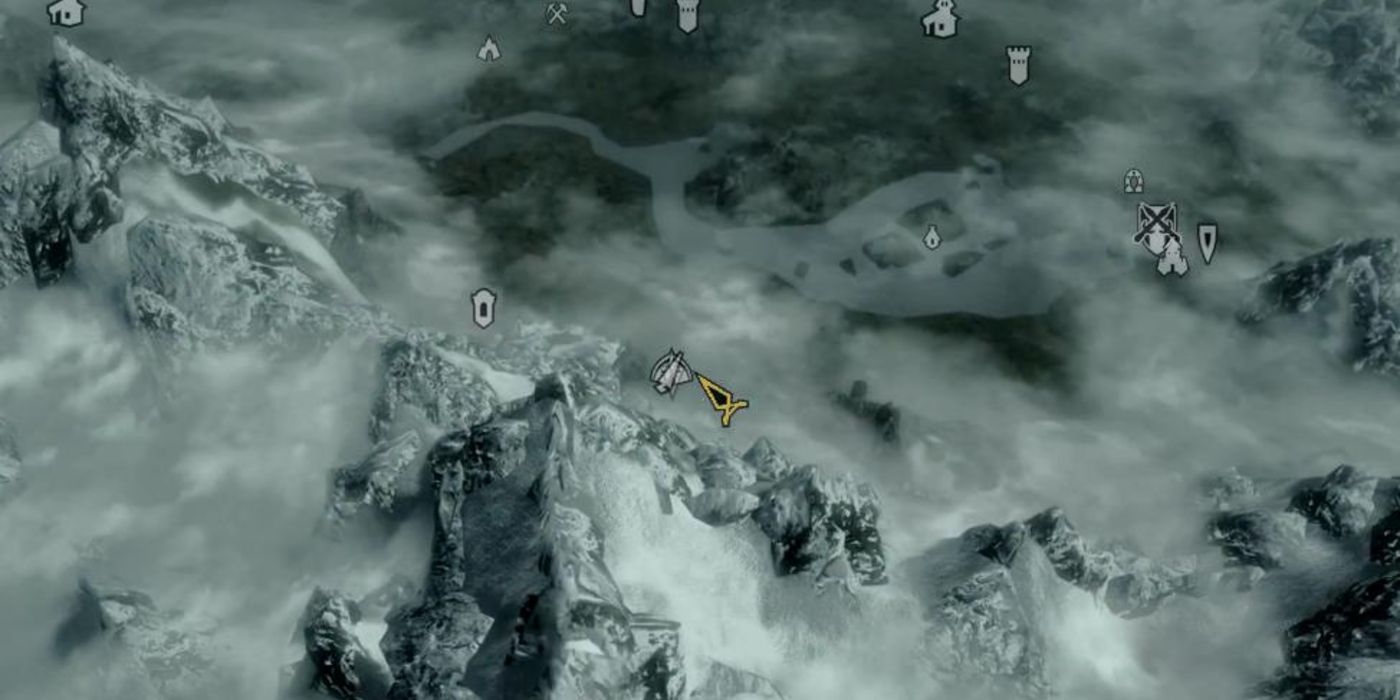 The stronghold in question is located in The Rift. The stronghold isn't too far off the cobblestone path, and you should be able to spot the marker for it on your compass. It's nestled into the foot of the mountains. As you approach, you'll notice the local orcs are in the process of fighting off a giant. Help them finish the battle, and you'll be prompted into a dialogue by one of the residents.

To get there relatively easily, you can simply travel to Riften first and then exit the city through the back gate which is located between Honorhall Orphanage and Mistveil Keep. Follow the cobblestone road that passes next to Lake Honrich, until you reach the lake's southwest area. 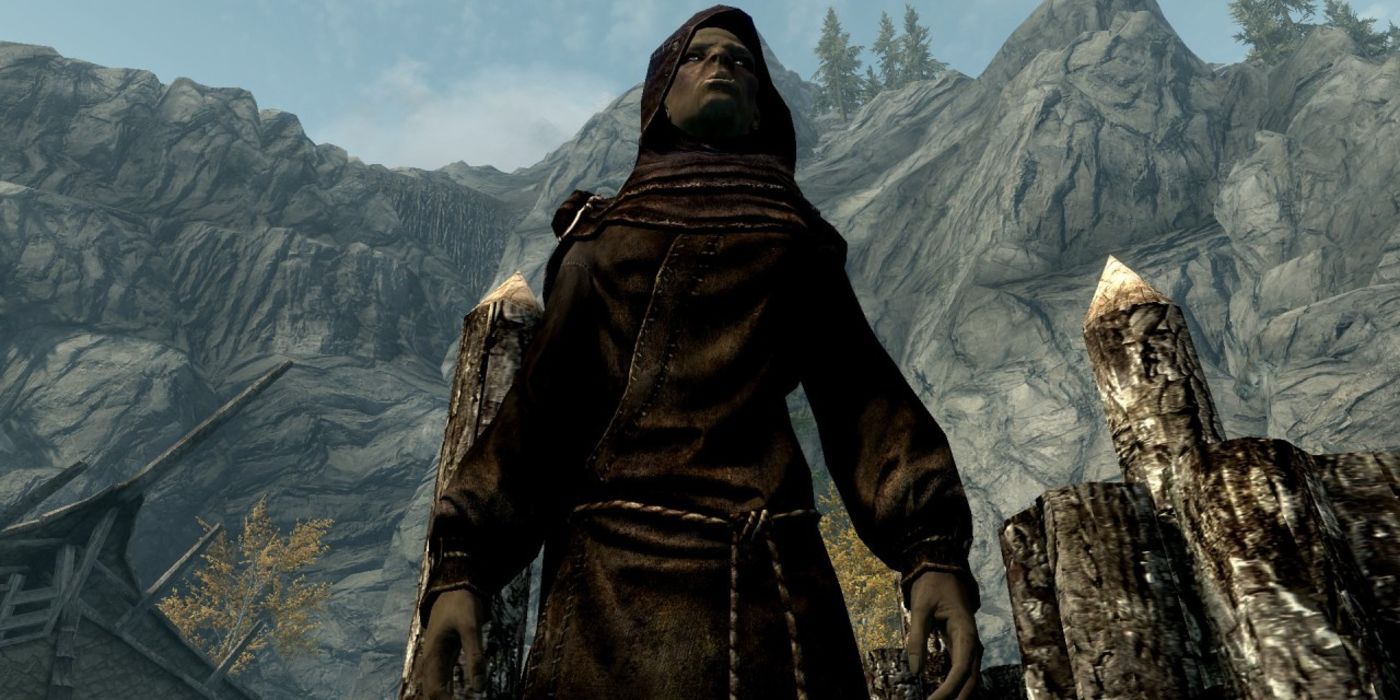 Atub will tell you that the orcs of Largashbur are in a bit of a pinch. Malacath has cursed their tribe's leader, Chief Yamarz, which in turn has inspired the local giants to attack their stronghold and take over Malacath's shrine. To mend the situation, Atub will request you find two ingredients to offer to Malacath in order to commune with him. 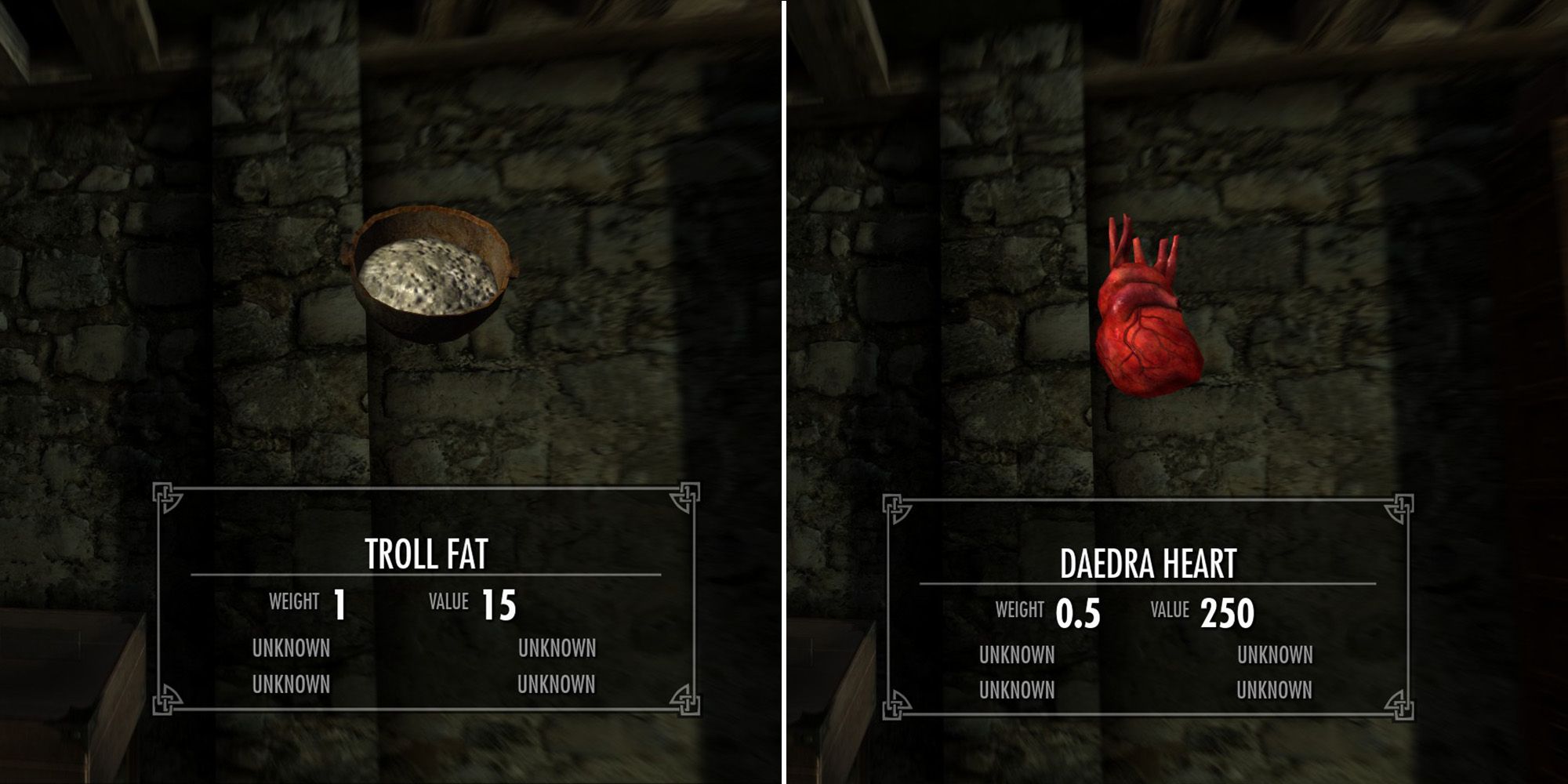 The two ingredients Atub asks for are difficult to gather at the best of times. They are sourced from especially dangerous enemies that are not easily found.

If you are a member of the Companions, you can find both ingredients in the Harbinger's room, on the shelves surrounding the table with maps. 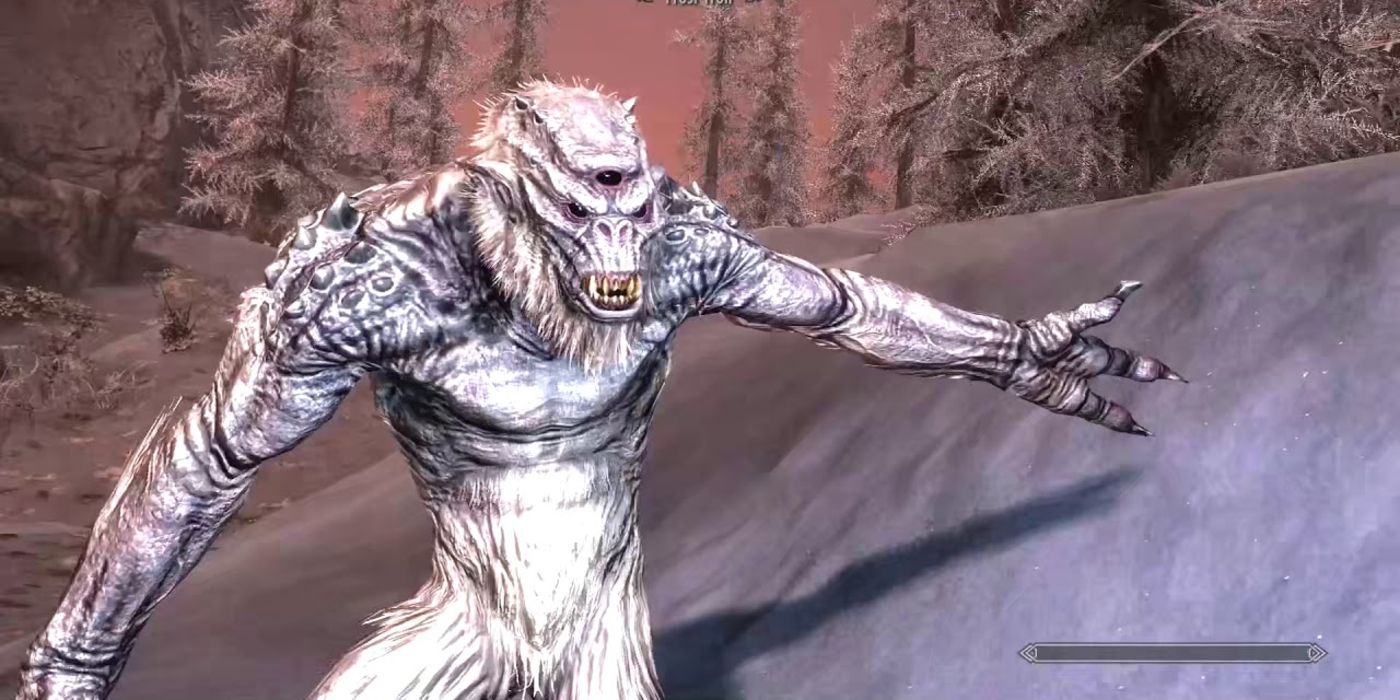 The first ingredient Atub will request is Troll Fat. If you don't have any at hand or haven't run into a troll, you can just buy some from an alchemy merchant. Falkreath also has two locations with Troll Fat conveniently out in the open: Grave Concoctions and Corpselight Farm. 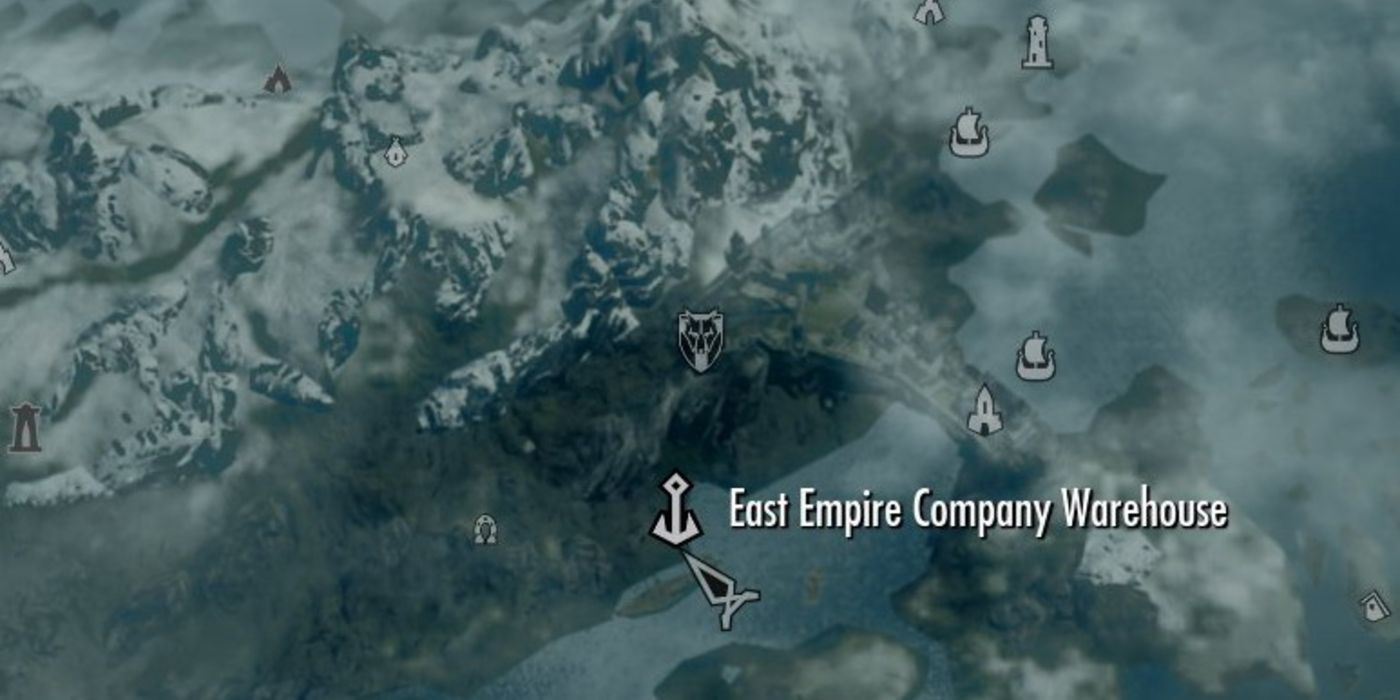 As a rare alchemical ingredient, you might want to have several portions of Troll Fat. You can find it at the East Empire Company Warehouse next to Solitude, where you can find over a dozen portions throughout. This is the most certain way of getting one if you'd rather not pay up at an alchemist's store. 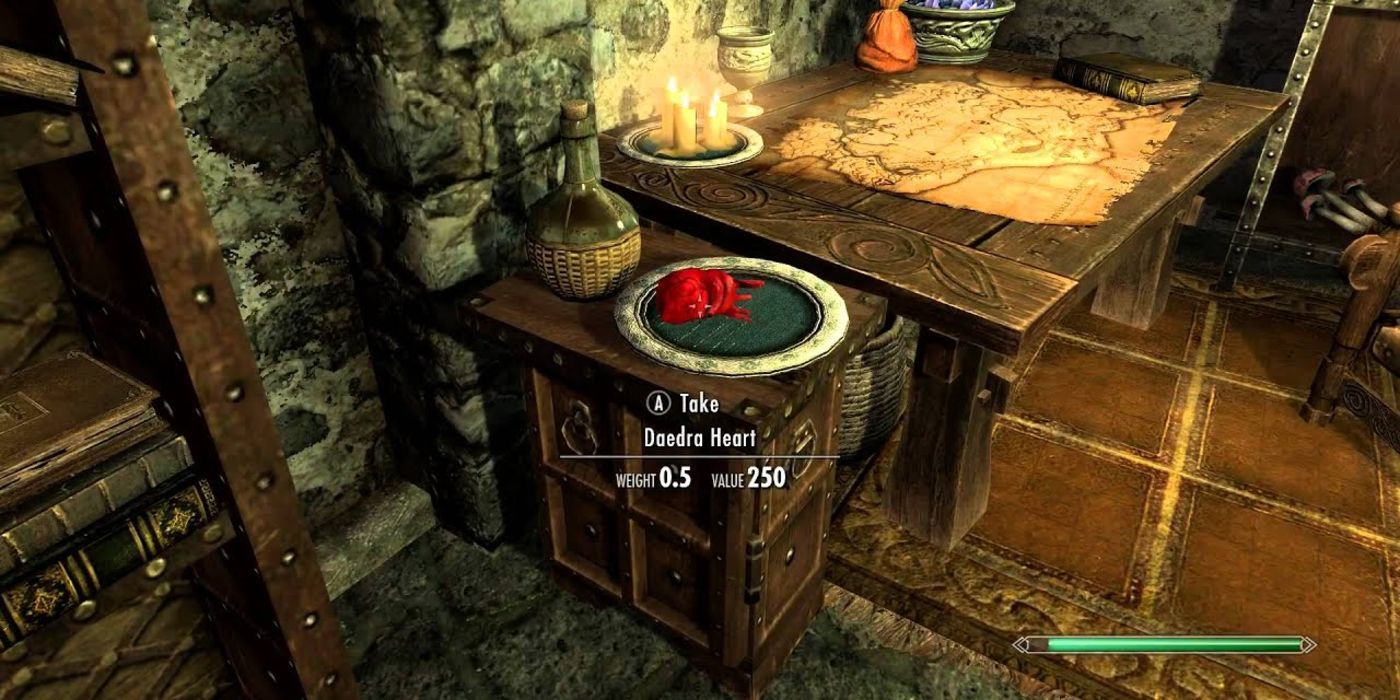 The second ingredient, a Daedra Heart is much trickier, especially if you're attempting this quest early into the game and haven't had the chance of slaying any Daedra. Whiterun's Arcadia's Cauldron will sometimes sell it, but it's generally uncommon.

The quest The Black Star will allow you to harvest Hearts from the Dremora found at the end of the quest while getting you another Daedric artifact. 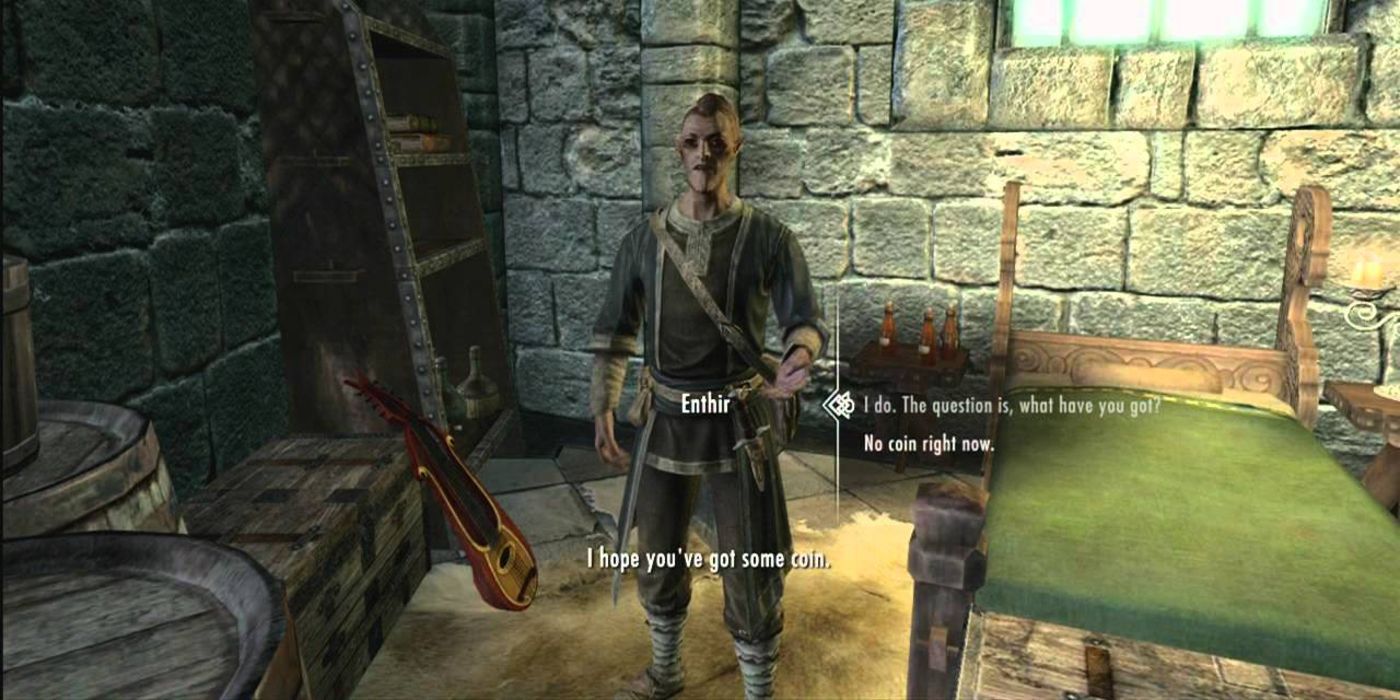 Alternatively, any mages who have entered the College of Winterhold can get on Daedra Heart from Enthir once a day. There are other quests located in Dawnstar, like Pieces of the Past related to Mehrunes Dagon, and Waking Nightmare related to Vaermina. These quests will be difficult at lower levels. However, if they are available, both of them will have Daedra Heart as loot.

Return For The Ritual 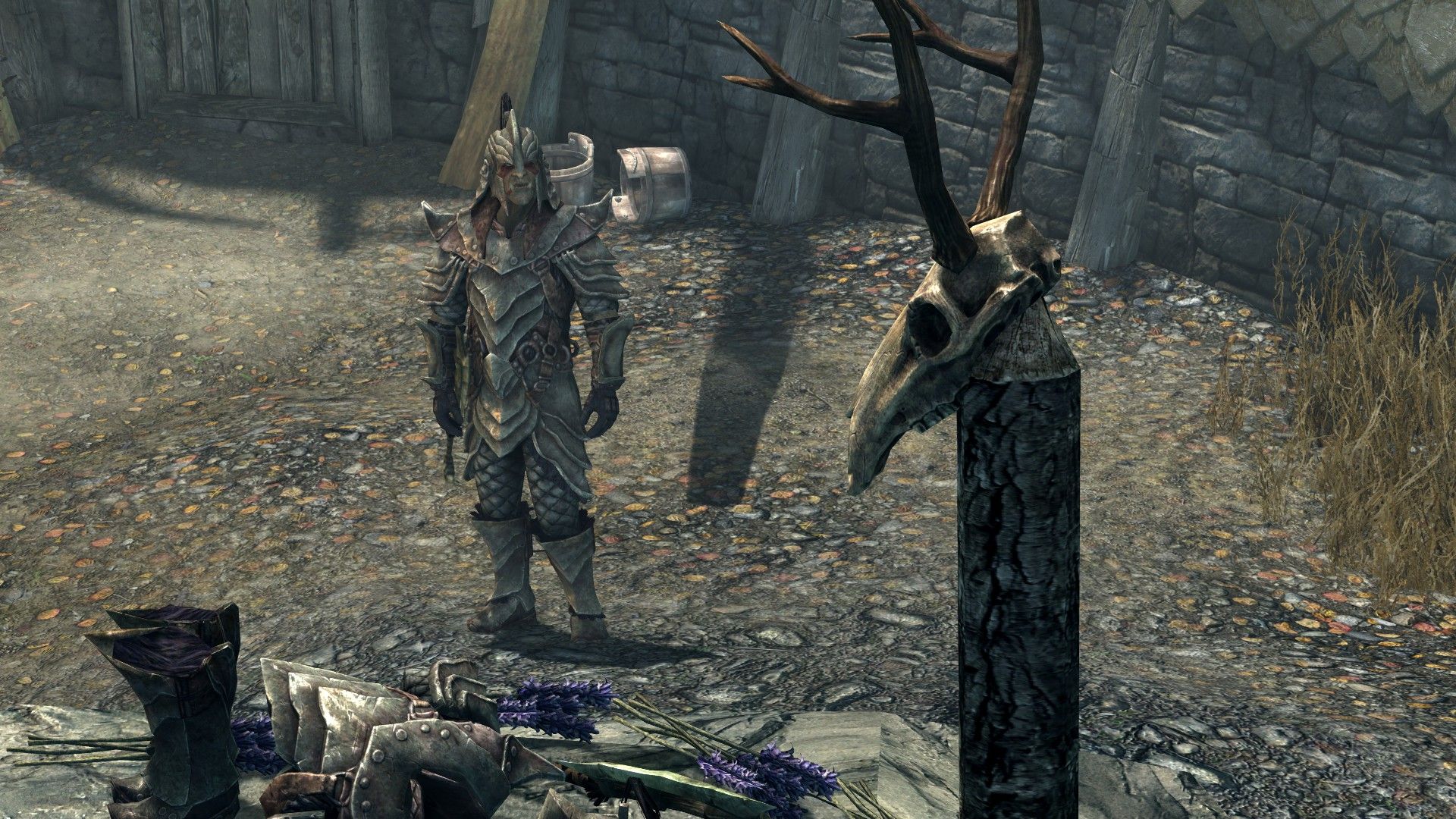 Once you've gathered your two ingredients, return to Largashbur and speak with Atub once more. She'll take the ingredients and begin communicating with Malacath, with Chief Yamarz.

It turns out that Malacath isn't pleased with the state of leadership in the stronghold and demands that Yamarz clears his shrine in Fallowstone Cave and bring the giant leader's club as an apology. Unfortunately, your participation does not end here.

Yamarz believes you're to blame for all this and must accompany him to Fallowstone Cave to see this whole deal done. 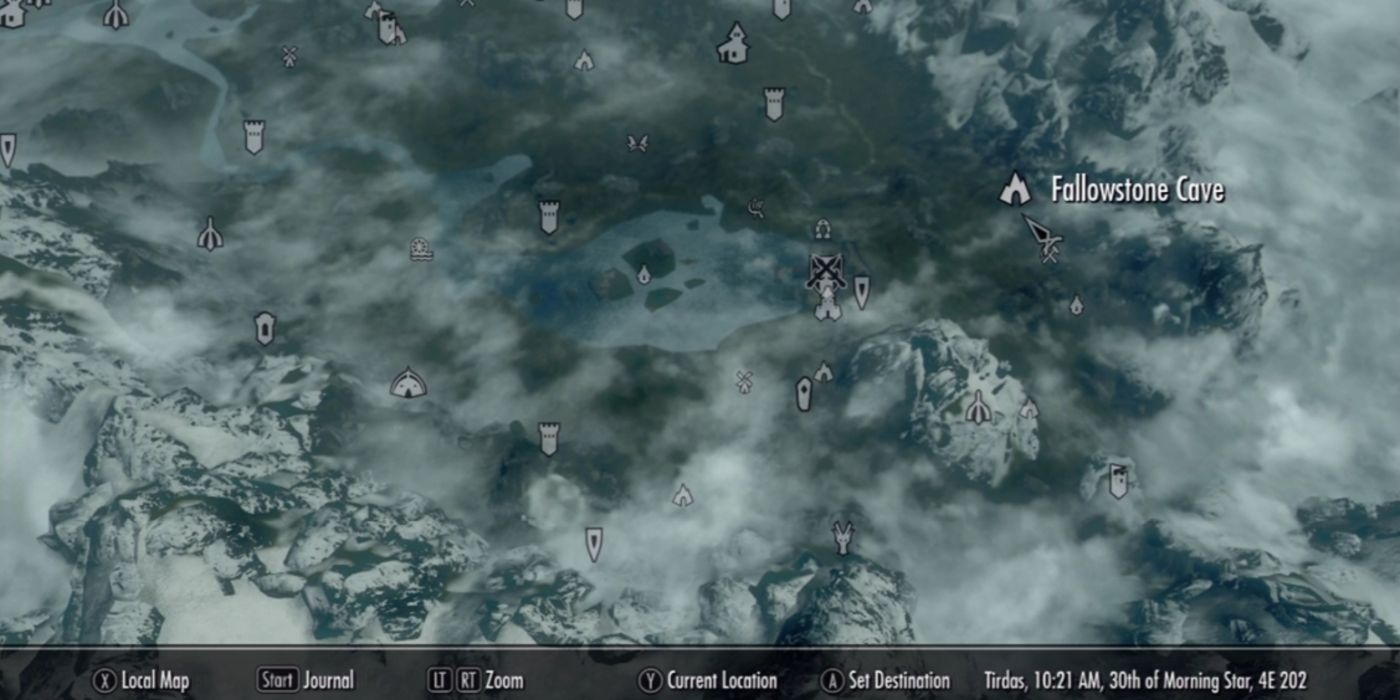 Fallowstone Cave isn't too far from Largashbur. You can choose to either travel with Yamarz or meet him there. Again, the simplest way to get there is to head to Riften first. This time, start from the front gate where the stables are located and head towards the northeast, into the mountains. 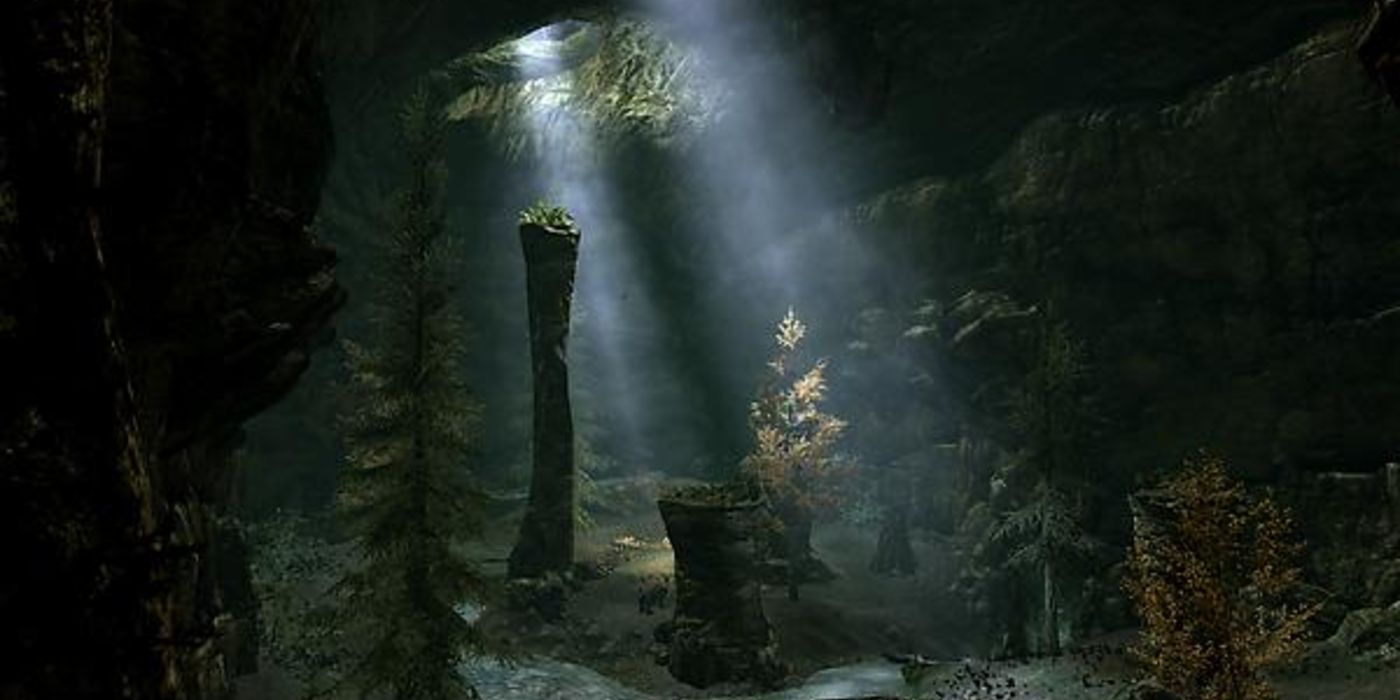 Fallowstone Cave will have a variety of enemies, from bears to trolls. However, giants are the main challenge here and considering they'll always win a melee fight against the Dragonborn, it's better to keep your distance and use a powerful bow or magic instead.

If you have a follower with you, it's also a good idea to ensure they're tanky enough to take most of the damage for you with Yamarz while you focus fire the giant.

Once you clear out the cave, you can enter Giant's Grove, which is a special location at the end of the area, where the final boss fight of the quest will take place.

Dealing With The Giant 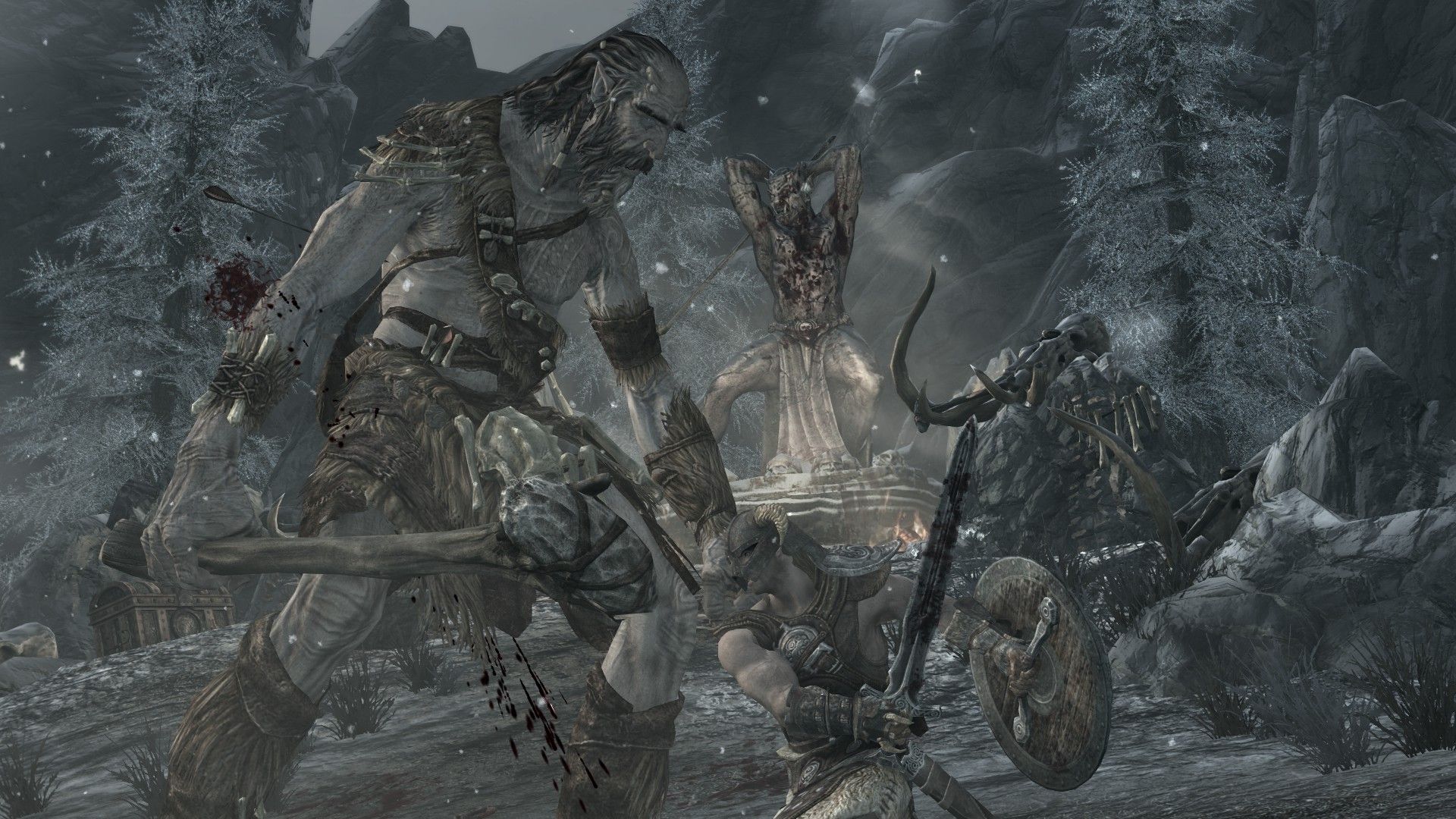 It's no secret by now that Yamarz is a bit of a coward. So much so that as you enter Giant's Grove where the leader of the giants is located, he'll offer gold in return for slaying the giant for him.

If you agree, Yamarz will turn on you after you've defeated the giant, and you'll be forced to kill him as well. If you refuse, however, Yamarz will approach the giant and die almost instantly.

It is most convenient to refuse the gold to avoid fighting him later​​​​​.

Either way, it's up to you to slay the leader of the giants. As with regular giants, the best strategy for any build is to have a tanky follower take some of the damage for you while you attack it from afar. Eventually, however, your follower will be downed, and the giant will turn its focus on you.

If neither of those is an option, there's a small spot located on the right side of Malacath's shrine where you can stand safely without being hit. It's possible to damage the giant from this location. It can be a bit tough to access since it involves lodging yourself between a rock and the shrine.

Mages will have a small advantage against him, provided they have the Impact perk, which allows Destruction spells like Ice Spike to stagger and slow down the giant enough to keep it at bay. Powerful archers will also find this fight straightforward, so long as they keep their distance. 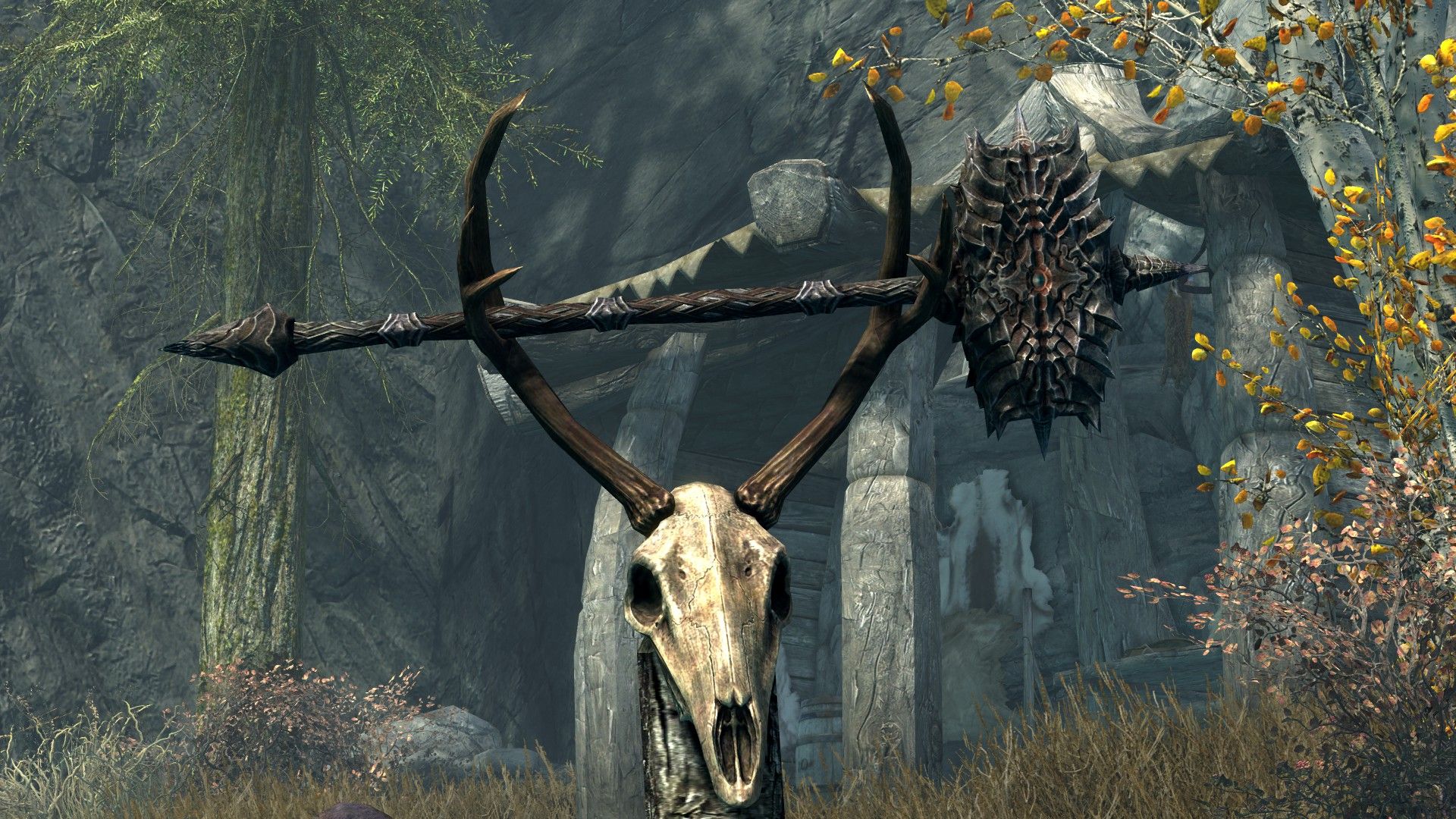 With the giant defeated, you need to bring Shagrol's Hammer back to Largashbur. Upon your return, Malacath's voice will be heard again. With Yamarz's death, the tribe is offered another chance of proving itself, with a brand-new leader. Malacath will also ask you to place the hammer on the shrine.

The hammer transforms into Volendrung. It is equivalent to a Dwarven Warhammer and deals 25 points of damage. Its enchantment lets it drain a staggering 50 points of Stamina it leeches off of any target it comes in contact with. This makes it particularly powerful in the hands of tanky Dragonborn builds.