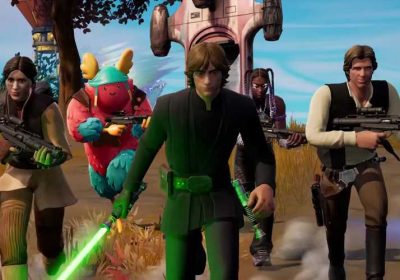 Star Wars has returned to Fortnite this week in what might well be the biggest crossover between the two entities to date. Dubbed Skywalker Week, which in turn brings the curtain down on Fortnitemares for another year, the latest crossover introduces three of Star Wars' most iconic characters to The Loop, not to mention a bunch of new items and yes, lightsabers are back again.

Epic Games dropped the surprise as the latest Fortnite update went live. The trailer for Skywalker Week shows off a lot of the skins and items that are available now to mark the event. Leading the way is Luke Skywalker. A number of players questioned why it was taking Luke so long to join the game, especially since Star Wars has been collaborating with Fortnite for more than three years.

Luke brings two more central Star Wars characters along with him, Han Solo and Princess Leia. The latter's likeness to the real character is pretty remarkable by Fortnite standards. Darth Vader also returns to the map for the event, because what would Skywalker Week be if you couldn't recreate some of the iconic scenes between Vader and Luke? First one to yell “Luke, I am your father” into their mic while playing squads gets a red lightsaber.

No, that's not true, but you can wield Vader's red saber once again, you just have to defeat him first. Thankfully you'll have Luke's blue and green lightsabers to help you if you find them in chests around the island. You'll also be able to get to Vader faster via Luke's Landspeeder. The new Star Wars-themed vehicle can now be obtained should you be lucky enough to see it drop out of a Junk Rift.

Also added to the game as a part of Skywalker Week is an R2-D2 backbling, plus a miniature version of the Millennium Falcon to wear on your back. Needless to say, all of the above and more will make the island feel more like Tattooine and less like Fortnite for the next few days. Plenty to distract you from confirmation Yoda has been talking like that for 50 years just to mess with people.