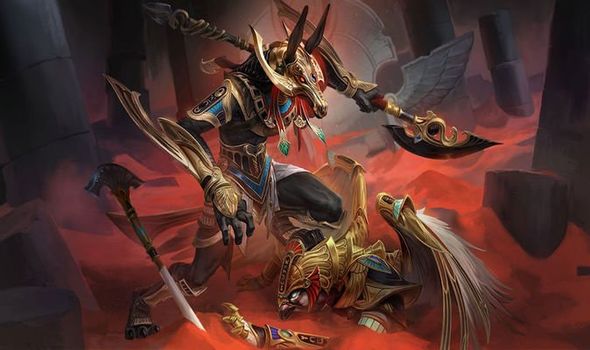 Smite has seen a significant release today with the launch of the new Sands and Skies Update.

And as you can imagine, the Smite patch notes are crammed with new information, including details on the new gods, Horus and Set.

It’s the first time that two Gods have been released at the same time for the free-to-play game, available on PS4, Xbox One and PC.

From the new information released by Smite devs, Horus and Set are opposites, both in personality and gameplay.

Horus is described as calculated, defensive, and focused on his team, while Set is aggressive and violent, trusting only himself to overwhelm his opponents.

HORUS DESCRIPTION: “Horus is a Warrior in Smite, but a very atypical Warrior. Though he can hold his own in fights, he’s best when he’s fighting alongside his teammates.

“His gameplay is true to his character: A truly selfless leader will only help himself when it also helps his allies.

“Horus is often seen diving into the fray to protect his teammates from danger. No matter where a friend is, Horus can — and will — bring in reinforcements to turn the tide of battle”

SET DESCRIPTION: “Set is an Assassin in Smite, relying on his own strength and mastery of the sands. Who needs teammates when you can create your own allies from sand? Set conjures spawns to attack swiftly before they dissolve back into dust.

“Beware when the rage consumes Set — he drops his staff, unleashes his claws, and embraces his animalistic urges. He attacks faster and faster, letting his inner chaos free and ensuring his opponents’ doom.”

The official Smite patch notes are huge and include a breakdown on Horus and Set’s abilities.

Details of which can be found below, with the Smite patch notes available to read here as part of the Sands and Skies update.

Each time Horus is damaged by an enemy god, Horus gains a stack of Resolute. If Set is the god damaging Horus, Horus gains 2 stacks. Each stack increases Horus’ Protections and CCR. Resolute stacks to a max count of 10 for 3s. When Resolute fades, Horus is healed based on the amount of stacks.

Horus uses his wings to create an updraft around himself, knocking nearby enemies into the air. Using the currents from the updraft, Horus’ next Basic Attack within 5s will create a gust of wind that travels forward, damaging enemies and slowing them for 2.5s. Enemies that are knocked up when hit take bonus damage.

Horus dashes forward a short distance, ready to strike with his weapon. If Horus hits a god he stops and stuns the god for 1.25s. He will then wind up a heavy cleave. Enemies hit have their Protections reduced for 3s.

Horus rushes to the aid of an ally. After selecting an ally, Horus will fly to their location before descending. Upon landing, the selected ally and all nearby allies have their health restored and gain protections for 3s.

Horus sends a mirror image of himself into the sky that scouts for a location to fly to. Upon selecting a ground location, Horus will begin to channel for 2s. Any ally near Horus after these 2 seconds are flown to the location Horus’ image chose. Horus and his allies land with such force, enemies take damage and are knocked away from the landing location. Horus and his allies gain a protective shield upon landing.

Each time Set damages an enemy, Set gains a stack of Relentless. If Horus is the enemy damages, Set gains 2 stacks. Each stack increases Set’s Attack Speed. Relentless stacks to a max count of 10 for 3s. While Kingslayer is active, Relentless has no maximum stack count.

Set amasses his hatred, throwing it forward and damaging enemies caught in its path. Set’s spawns are commanded when Set fires this attack, dashing towards a location Set determines. Enemies hit by either Skewer or a Spawns dash take damage and are slowed for 3s. Any dash after the first will deal 40% damage.

Set conjures a spawn of himself made of sand. These spawns will stand where summoned and attack nearby enemies. Set can have up to 2 charges of this ability, allowing him to conjure spawns in quick succession. Set can interact with these spawns with his other abilities, commanding them to attack or teleporting to them. Set can only have 8 spawns at any given time.

Set conjures a Sandstorm around him, protecting him from Physical Damage and causing him to be immune to Slows. Enemies near Set are damaged every .4s for 6s and have their vision obscured by the sands. If Set is targeting a spawn when this ability is cast, he will immediately teleport to the spawn. Otherwise, he can reactivate this ability to teleport. Set can only teleport once per Sandstorm.

Set enrages, channeling his rage towards his enemies. Each time Set damages a god they gain a Mark of Set. At 4 Marks the target erupts. Enemies take a burst of damage while Set becomes empowered, restoring Health and immediately gaining a charge of Spawn of Set. Excess charges are immediately consumed, causing a Spawn to appear near Set.