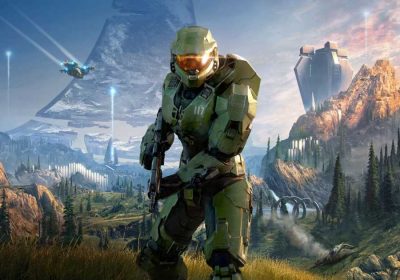 Every now and then you'll see stories about someone running Doom on the most random objects. Most recently, we came across the game running on a tractor, Halloween candy, and even inside Doom itself. Perhaps inspired by that last one, someone has given the same treatment to Halo Infinite, but not quite in the same manner. While running Doom on random objects requires some coding knowledge, it's significantly easier for Halo Infinite.

This feat has been achieved using Halo Infinite's Forge mode, which is set to launch soon. And, it's not running the version of Infinite you're familiar with, but a 2D, side-scrolling adaptation of it. As spotted by PCGamesN, YouTuber Red Nomster has made creative use of Halo Infinite's Forge mode and has created a retro version of the game that's playable on the arcade machines you may have spotted around Zeta Halo.

Red Nomster explains that you can use the usual controls to play the game, but the button to interact with items must be used separately on the arcade machine, giving it more of an authentic arcade feel. They take us through a small level, where a tiny avatar of Master Chief opens the door to a bunker, jumps over the projectile launched by a Grunt, and then dispatches it. He then interacts with a switch, climbs a ladder, frees The Weapon, and exfiltrates. Not quite the same experience as the real Halo Infinite, but it has similar story beats.

The rest of the video is used by Red Nomster to show how they used Forge's logic-based coding system to create this game within the game. While it is pretty simplistic, the fact that Forge mode can create a whole video game is impressive for sure. What's more, the YouTuber also mentions that the launch version of the mode will allow for much larger and complicated commands.

With 343 Industries struggling to put out more Halo content, fans like Red Nomster have decided to take things into their own hands. Another example is that of a fan recreating Halo 2's lost ending using official concept art, storyboards, and illustrations from the early developmental phase of the game.