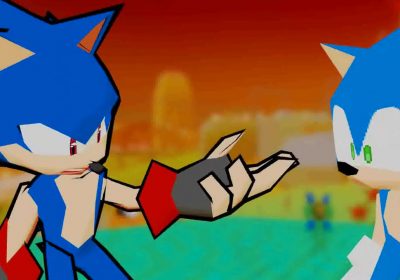 The Sonic game you've all been waiting for (no, not Frontiers) is now playable. Sonic Storm is a fan-made demo that combines the visuals of Jet Set Radio and Demon Turf with the iconic moves and speed of SEGA's blue hedgehog. It's fully 3D and features an open-world level filled with rails, jumps, shortcuts, and secrets.

Sonic Storm is being developed by a small team who as well as making the game will be tackling voice acting and an original score. The main creator, Azura Hardware, states in the game's Discord channel that the basis for the story is, "Sonic and Shadow set their differences aside to take down Robotnik."

They're also very aware of the similarities to Jet Set Radio, stating, "It's unique in the sense that the gameplay style isn't really derived from any existing Sonic game. It plays closest to Jet Set Radio with way tighter controls and without the slipping about."

The game will feature six characters: Sonic, Shadow, Rouge, Tails, Robotnik, and Metal Sonic. "Everyone else (apart from Amy who gets a significant role change) isn't canon in the Storm timeline."

If you want to try the game out for yourself, you can download the time trial Testfire here, and the Dual Story demo here. There's also a video showing off a full run and speed runs that you can watch if you want to see more of the frenetic gameplay.

Sonic Storm looks like a great game to tide fans over until the release of Sonic Frontiers, possibly in November. It has recently been reported that Frontiers was originally set to release at the end of 2021 to coincide with Sonic's 30th anniversary, but was pushed back into 2022 for quality assurance.

It's good to see a fan-made Sonic game coming together, as just last week, footage from a scrapped Sonic mobile game was released. Fans are always keen for more Sonic, and it's even available to play on Tesla cars – although, that has landed the company in trouble.