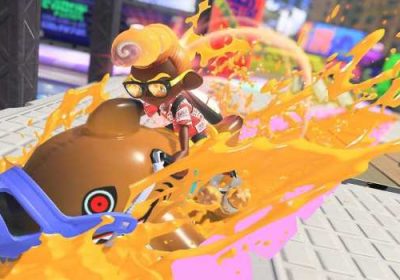 I was unreasonably excited for Splatoon 3. It wasn’t unreasonable because Splatoon doesn’t deserve excitement – it’s one of Nintendo’s best sellers and biggest titles, along with Mario and Zelda – it was unreasonable because I’ve never played Splatoon before. Still, I got swept up in the trailers and the excitement. My friends who played the older games said it looked great, and I believed them. But after a weekend with Nintendo’s squid-based shooter, I’m not sure I’m gelling with it. Or inking with it. Can you ink with something?

If you want me to use my Joy-con and gyro controls (really?) in a competitive shooter, then you’ve got to give me a little aim assist. I’m not just crying because I’m a silly games journalist who, by nature of my line of work, isn’t good at games. The shooting just doesn’t feel very good. In a shooter, that’s kind of a big deal. I’ll admit that I have come around to using the gyroscope a little bit, and it is handy for making those small adjustments in a firefight, but my best matches have still come when using rollers. They’re big, wide, slow weapons that require you to physically run over enemies to kill them, as if you’re driving a steam roller in a cartoon. Or in real life, I guess, but you don’t see many people getting flattened on the news.

I’m sticking with it. I paid 50 smackaroos for this game, and I want my money’s worth. Besides, after a weekend of playing I’m only level eight. I wasn’t playing non-stop, and I did some story stuff that doesn’t seem to grant you experience, but I want to sample the new game modes that unlock at level ten. There are new weapons that I can unlock with every level, too, but most of them have annoyed me more than they’ve aided me thus far. Why is every opponent a master with the Splat Dualies, but when I use them they suck?

There’s one weapon that changes everything, though. The Aerospray MG is lauded to be a pretty great weapon overall, and I can’t disagree. It has good coverage and I’ve taken out a fair few opponents with it in 1v1s. But the Special ability it grants you is even better. Specials in Splatoon can do anything from buffing your speed when you drink a can of painty pop, to launching paint explosions from oversized rocket launchers. One even gives you the ability to swing around like Spider-Man. But the Aerospray’s Special? It turns you into a fucking shark.

This is not just any shark, it’s big and it’s bloody angry. Once you’ve aimed and pulled the trigger, you ride atop the beast in a manner Chief Brody could only dream of. I’m not sure if it’s some kind of mechanical creation, but Splatoon’s array of aquatic creatures suggest it’s an actual caged animal that you only release once you’ve sprayed enough paint on the battlefield. Once you’ve built up your Special meter, you can unleash the beast. Aim, pull the trigger, and chomp. Then you explode.

The Special shark is technically called the Reefslider, but I’ve named mine Chompy. It’s often a suicide mission, firing yourself deep into enemy lines in order to leave a trail of paint and hopefully take down a few of their players in the ensuing explosion. Miss, and you’re dead. Don’t take out enough opponents? You’re also dead. But for a few seconds, you’re invincible. You’re a giant shark intent on destruction. And in that moment, Splatoon is beautiful.