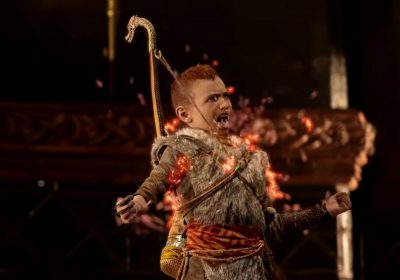 A gaming insider has leaked what looks like several new spoiler-filled pages from God of War Ragnarok's art book.

The wait for God of War Ragnarok has been pretty brutal, but we're just a few months away from release now. As you'd expect from a big triple-A release, that means that potential leaks have started popping up more frequently, with some recent ones of note including Odin's design possibly being leaked, and the cover of the art book giving away a little more than it should have.

That image of Odin was leaked by Dusk Golem, an insider known for leaking games from Capcom and Konami, and it looks like they've got some more images from the art book that have been shared online by a Redditor. Although there's a chance that the images are false, this is your last warning for God of Ragnarok spoilers, in case they do turn out to be legitimate.

The images, which were shared by Redditor gabriel4434, look to be once again from the game's art book and show a range of different scenes and concept art, all plastered with "Dusk Golem was here" as a watermark. It's tough to tell what some of them are trying to show thanks to the watermark, but some of them give more detail on the games' realms, while others show scenes we haven't yet seen. None of them are massive spoilers overall and on the same sort of level as revealing Odin's design, but they're clearly things Sony Santa Monica doesn't want out there yet.

One of the images shows concept art of Kratos fighting Thor, notably not using his Leviathan Axe or Blades of Chaos. Although this was guaranteed to happen, this is arguably the biggest spoiler of the bunch as it's something we haven't seen in trailers yet. One image also shows what some are speculating to be Heimdall.

The rest of the images show different factions of characters from the games' various realms, including showing almost all the Aesir Gods in the game standing next to one another, the Dwarves, the Helwalkers, and the Elves, as well as giving a little description of who they are underneath.