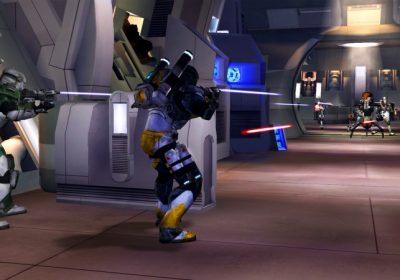 Fresh off its announcement of its revival of the cult-favorite Xbox game Stubbs the Zombie in Rebel Without a Pulse, publisher Aspyr Media is back with another modernization of a classic Xbox title. The LucasArts fan-favorite tactical FPS, Star Wars: Republic Commando, is coming to PlayStation 4 and Switch this April.

Star Wars: Republic Commando takes place during the events of the Clone Wars. If you’re familiar with the history of the famous galaxy “far, far away,” then you know the Clone Wars is the conflict depicted in Attack of the Clones, Revenge of the Sith, and the Clone Wars film and television show.

Republic Commando has you control an elite squad consisting of four clone troopers who were genetically engineered to be better than your average, run-of-the-mill clones. The campaign takes players across the major fronts of the Clone Wars, including the desert planet of Geonosis and the forested Wookiee home of Kashyyyk.

This PlayStation 4 and Switch version only has the single-player campaign experience, but features modernized controls. Check out the announcement trailer for a blast from the past.

Star Wars: Republic Commando comes to PlayStation 4 and Switch on April 6, and will cost $14.99. If you’re on Xbox, don’t sweat it, because the original Xbox version is already backward compatible on both Xbox Series X/S and Xbox One, and only costs $9.99.

To see Star Wars: Republic Commando in action, check out our episode of Replay.