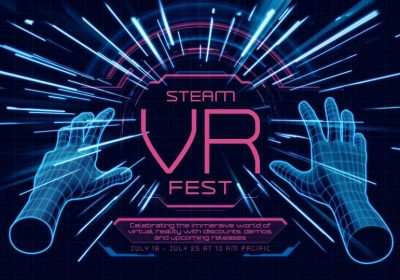 The event officially runs from July 18th through July 25th and it will be an exclusively VR affair highlighting what the immersive medium has to offer. We’ll update this post with some of the most notable deals and demos as soon as we have a chance to peruse the final content in Steam VR Fest.

The event follows on from last month’s Steam Next Fest, which gave us demos for titles like Requisition VR, Kayak VR: Mirage, Ruinsmagus and The Last Worker. However, Next Fest was a Steam-wide event, featuring flatscreen, traditional games alongside immersive content. Steam VR Fest puts the spotlight solely on content for PC VR headsets. In the trailer for VR Fest the games highlighted are mainly well known existing VR titles such as Boneworks and The Walking Dead: Saints & Sinners, so we’d expect titles like those to see discounts during the event alongside new VR demos for upcoming games.

We know a game called Increment is included in the event as it satirically channels the energy of clicker games, “Press buttons, pull levers, and use your body to discover a strange world in this VR game about increasing.” There’s a free demo available now and full release planned later this year. Psychedelic puzzle game Squingle will be participating in VR Fest, as hinted at  in a recent tweet, with a demo that is available now.

Keep an eye out for more details on Steam VR Fest demos and discounts to come soon. The event runs from this Monday, July  18, until July 25 and can be found over on the Steam Store’s VR page.