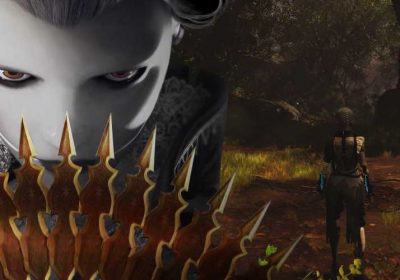 Well, you have just defeated Steelrising's first boss: The Unstable Lancer. Now it is time to polish off the second area in Saint Cloud. The Forest section is pretty small when all is said and done, but it does contain two new types of enemies. In the early going, you may find this section to be a little difficult. Worry not, we are happy to guide you through it.

Related: Steelrising: Saint Cloud Part 1, The Gardens WalkthroughAnd, of course, there will be a boss fight to cap it all off. We will give you the inside scoop on how to beat the Unstable Lightning Ram without getting scrapped in the process. And hey, we'll tell you where all the goodies are along the way too. 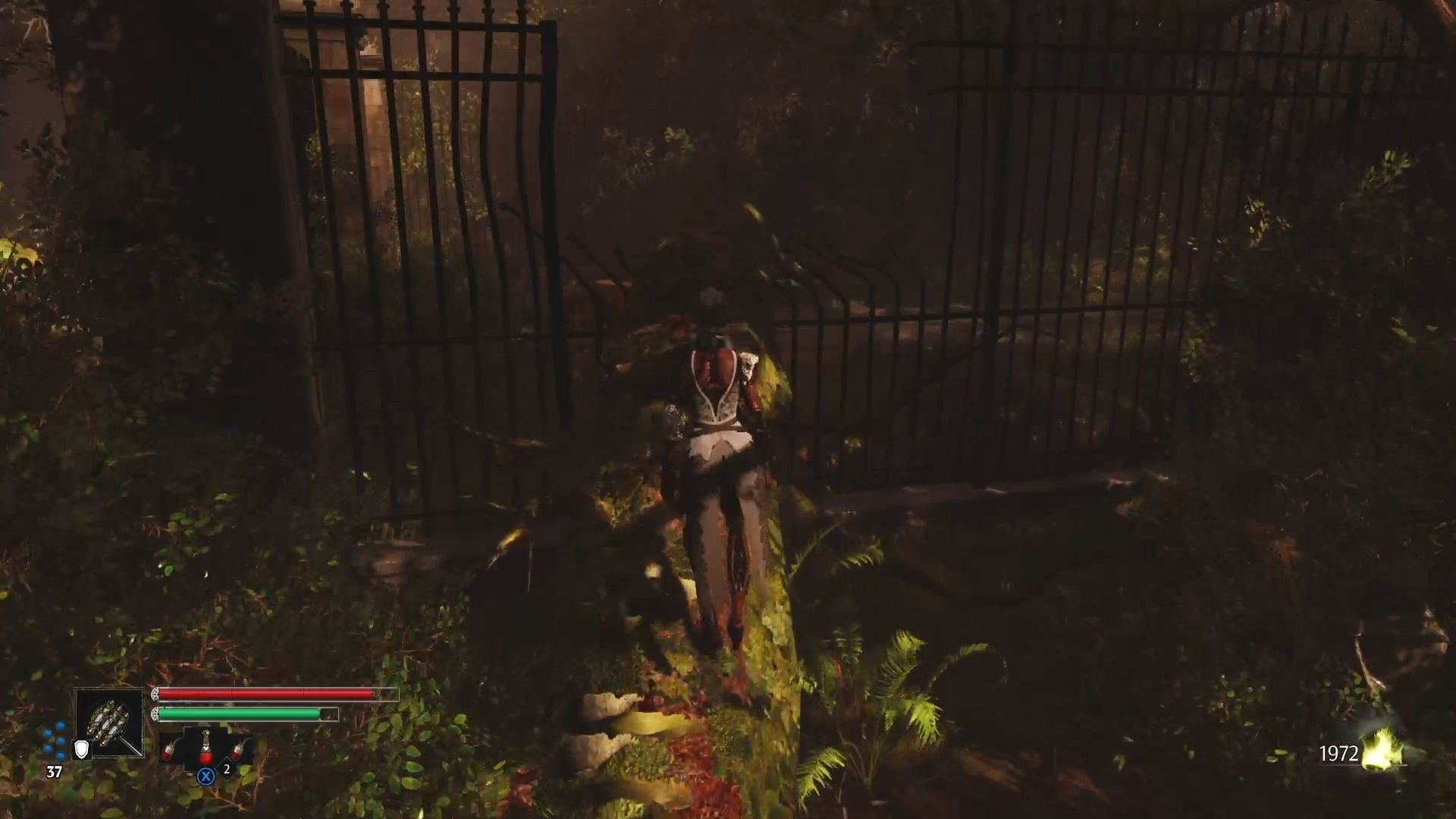 Upon leaving the Unstable Lancer's area, you will use a fallen tree to climb over the gate. From there, drop down onto the road, and open the treasure chest. You will obtain the Charleville 1789 Shield Musket, which may just end up being part of your kit well into the later parts of the game (it is that useful). Head down the road, and you will officially enter into The Lantern area. Take out the Automats on the bridge, and grab the pieces of Muscadin armor in the treasure chest. 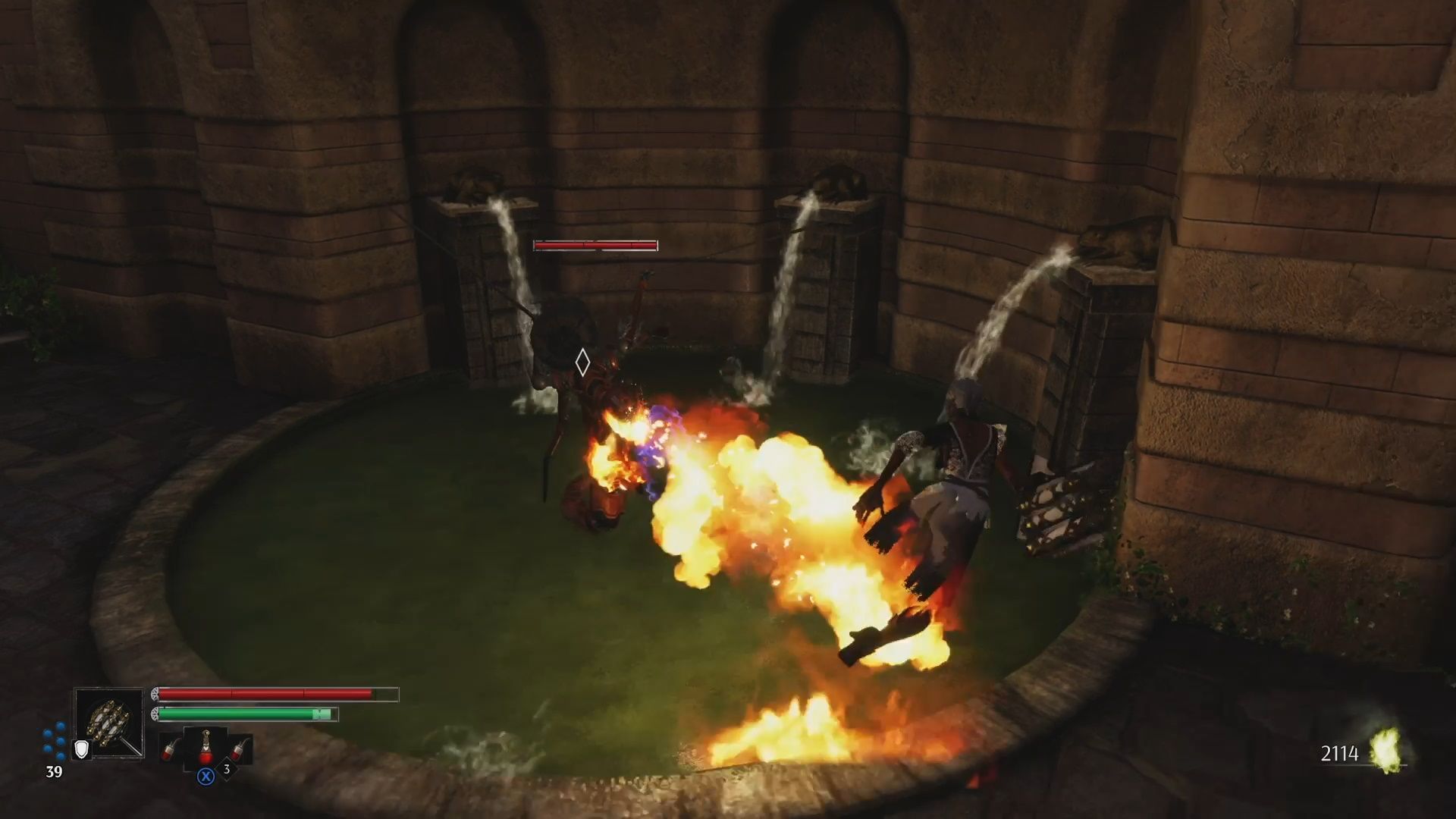 Now, you should see two sets of stairs and a fountain in between them. Once you get close enough, a Snake-Bodied Automat will drop down smack dab in the center of the fountain. These guys have some fast evasive techniques, and they like to breathe fire. Just wait for them to commity to their fire attack, circle them, and then smash 'em with a fully-charged strike. Climb the stairs, take out two standard Automats, and open the treasure chest to get the compass and the Nemesis Claws weapons. Now, look for a hole in the retaining wall. Once you enter this hole in the wall, you will slide down a hill and enter into The Forest. 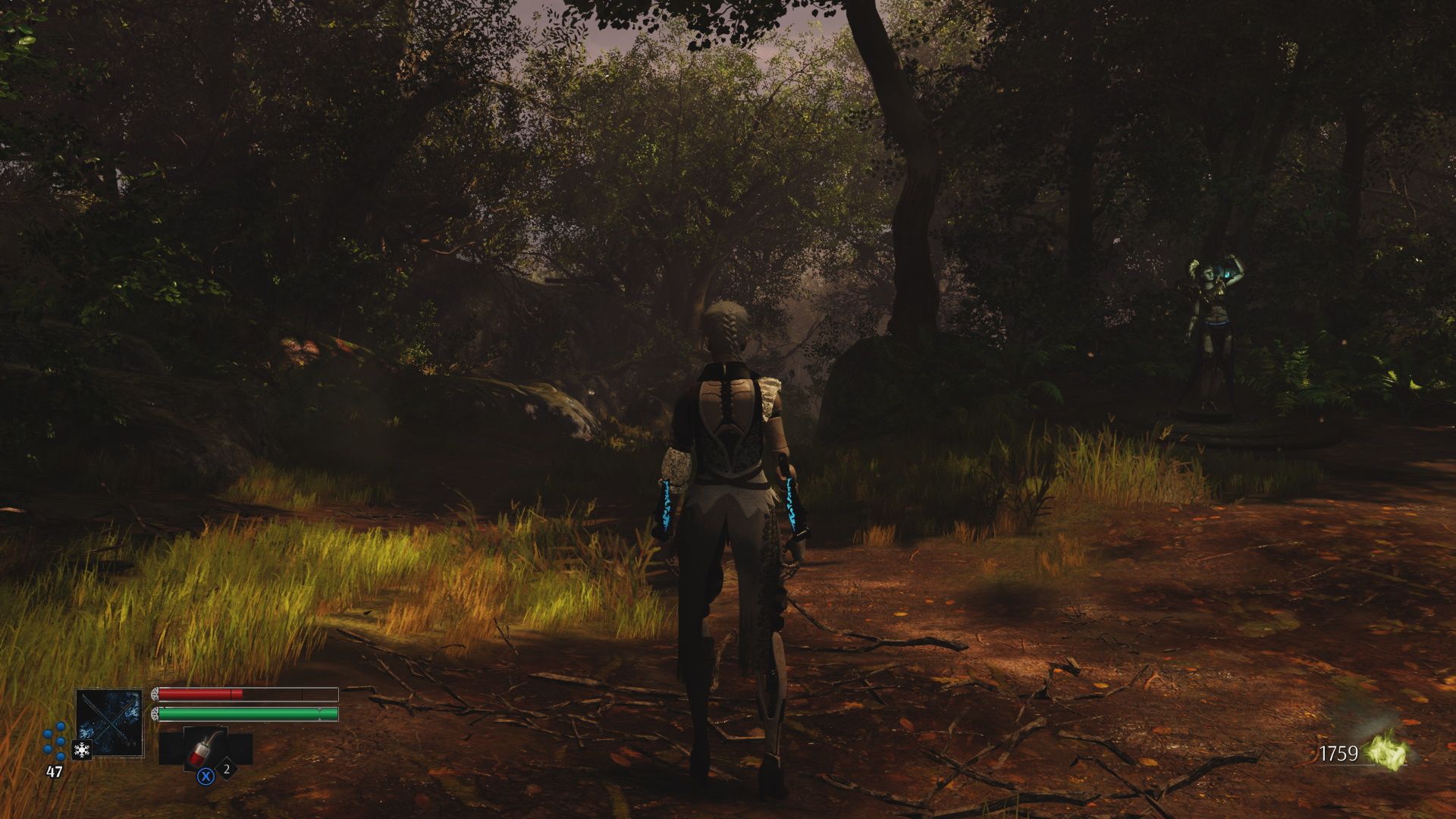 Right at the beginning, there will be a Vestal. Activate it before you continue. You will encounter some Automats just a little past the Vestal, including another Snake-Bodies Automat and A Lancer-type (a weaker version of the boss you just fought). Once you take care of the Lancer, go open the treasure chest near the well. Inside is a Lavoisier Catalyst. The Lavoisier Catalyst can be used to upgrade your oil flask! From here, you can go to the left or to the right (though there are goodies in both directions, so you are going to want to circle around). 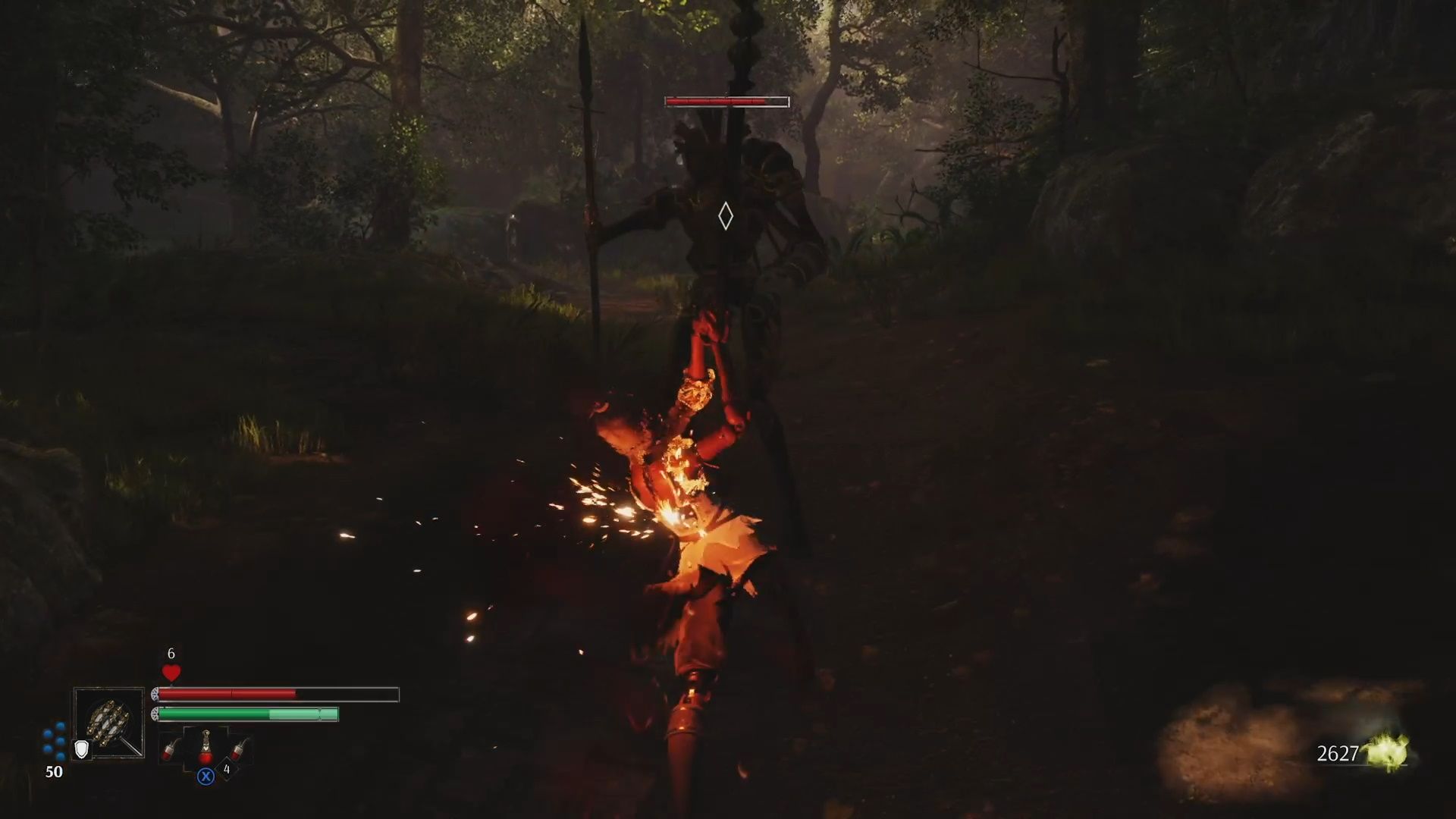 Off to the left, there is an abandoned farmhouse. In the barn beside it, there is a treasure chest that holds the Falchion and Sabre weapons. However, inside that same barn, hidden behind some debris, is one of those Snake-Bodied, fire-breathing Automats. So, make sure to take care of them before grabbing the chest. 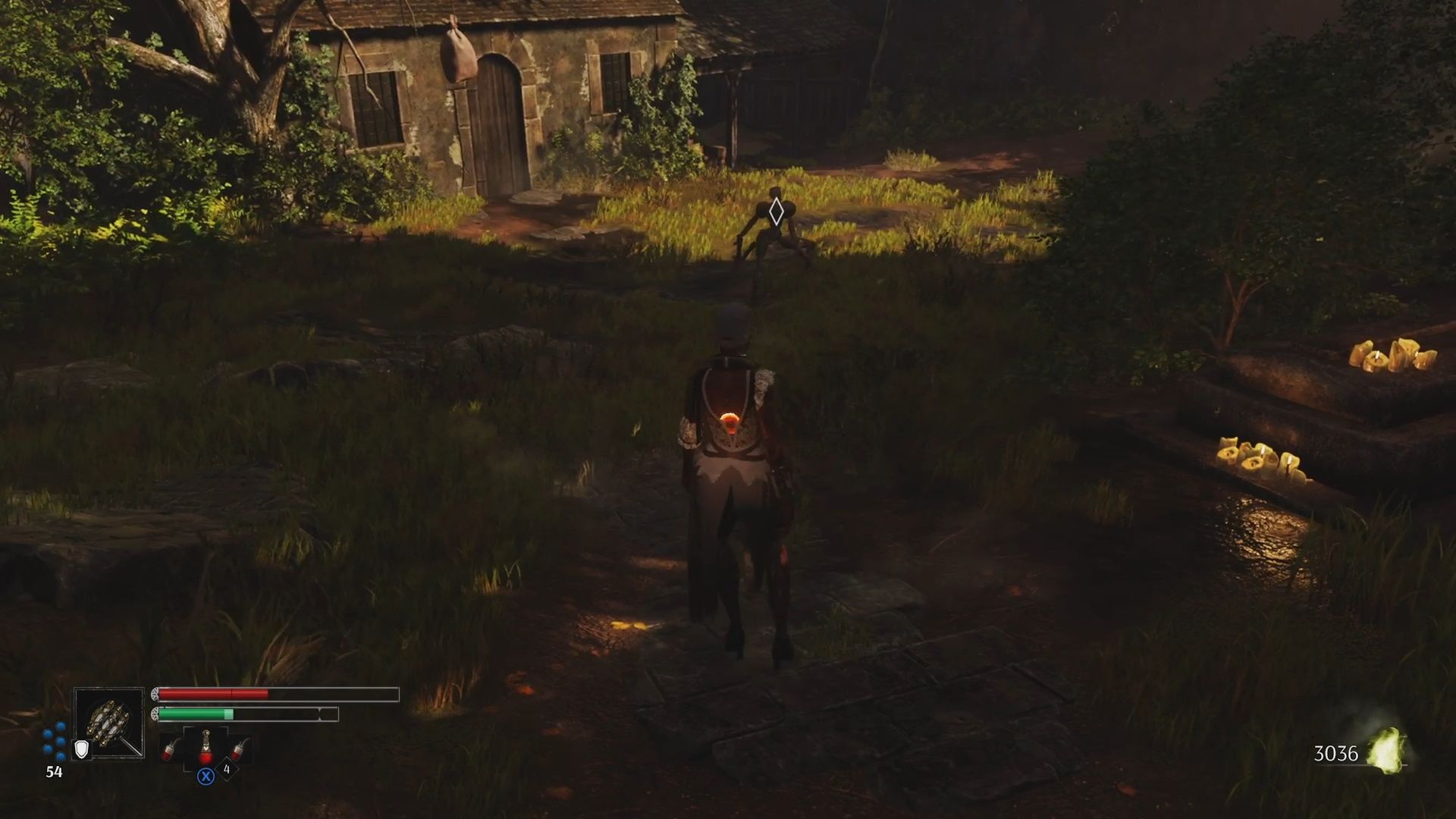 A little to the right of the well, there is a downed automat propped up against the wall. A module key is at their feet. Take out the Automat guarding their body and grab the key. If you continue down this path, you will encounter another Snake-Bodied Automat. If you aren't quite used to fighting them yet, you can circle around, moving past the farmhouse with the Falchion and Sabre, and sneak up behind this Automat for a stealth attack. 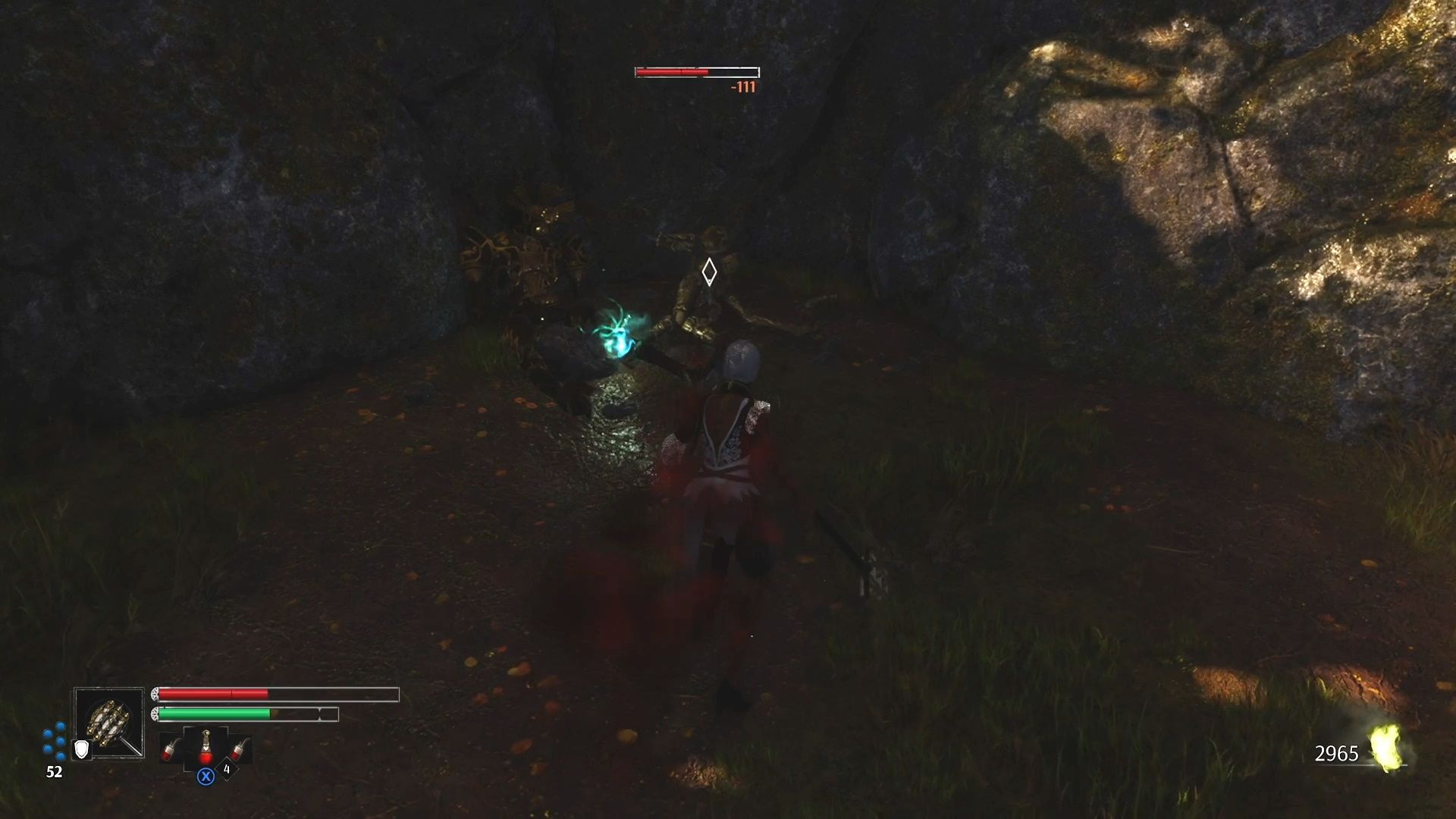 As you can probably tell, if you circle your way around in either direction, you will eventually reach the same place: The Pier. While you won’t have the key to open the door, the fence to the left of it has been conveniently bent for you. Hop up and continue onto the next area. You will now need to fight the Unstable Lightning Ram Boss. 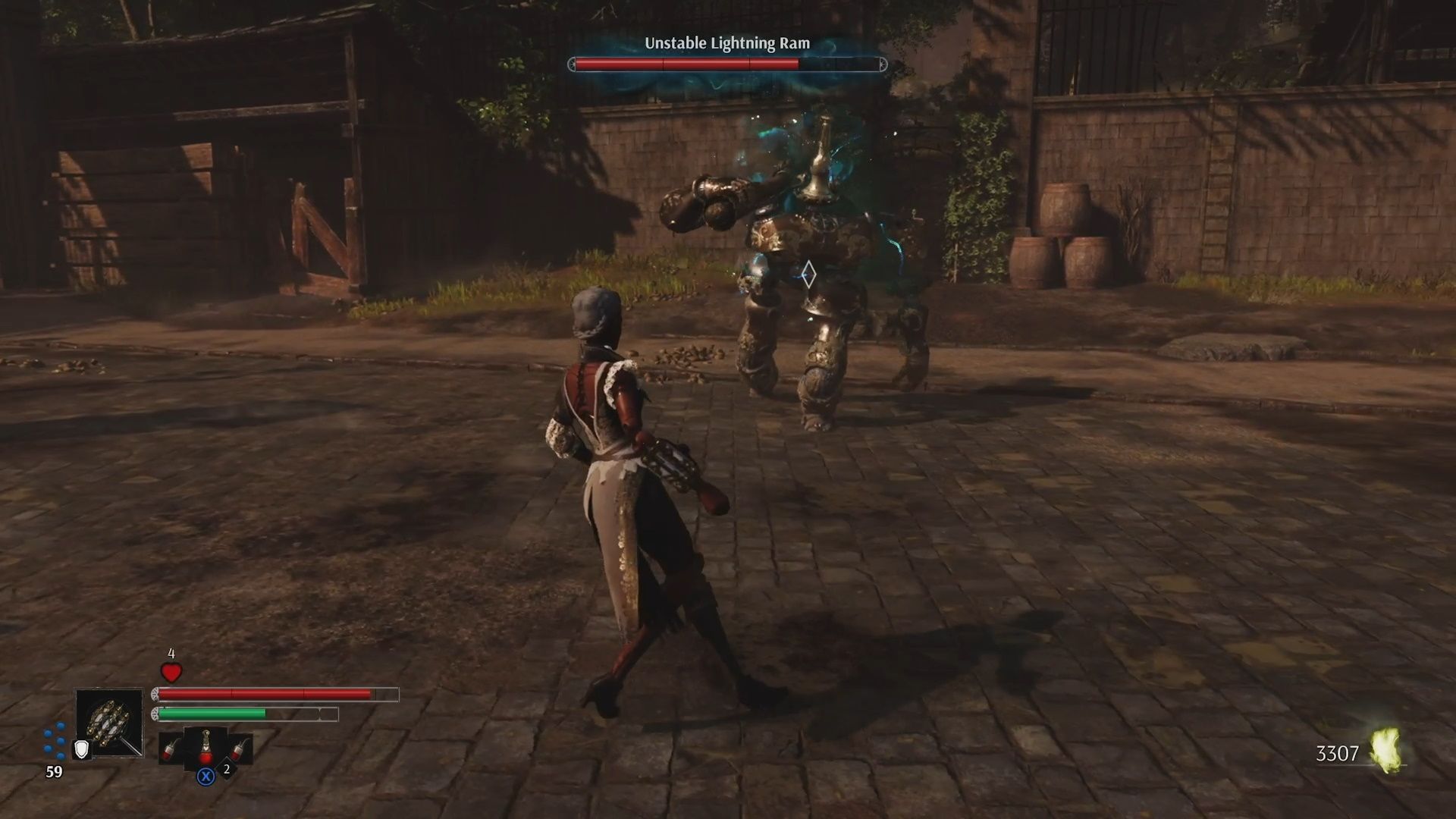 The Unstable Lightning Ram has a number of attack sequences. They have a charging ram attack, which is easy enough to dodge. They have a ram attack combo, but these attacks are just as linear and easy to dodge as the charging version. It has another combo attack where it takes two wide swings with its club. This attack is super telegraphed, but the timing is wonky enough that he may end up getting clipped by it (especially since it hits far and wide). 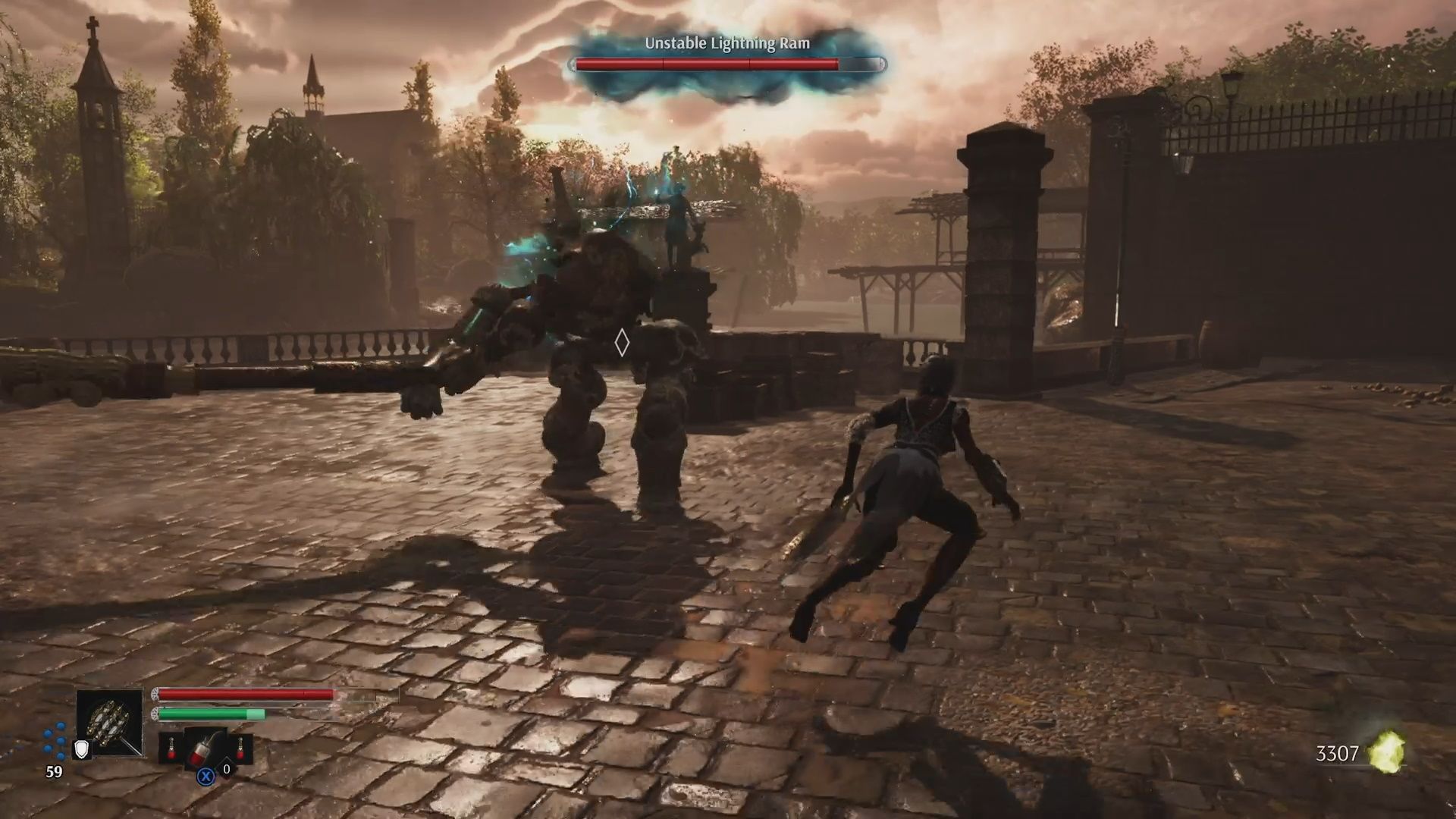 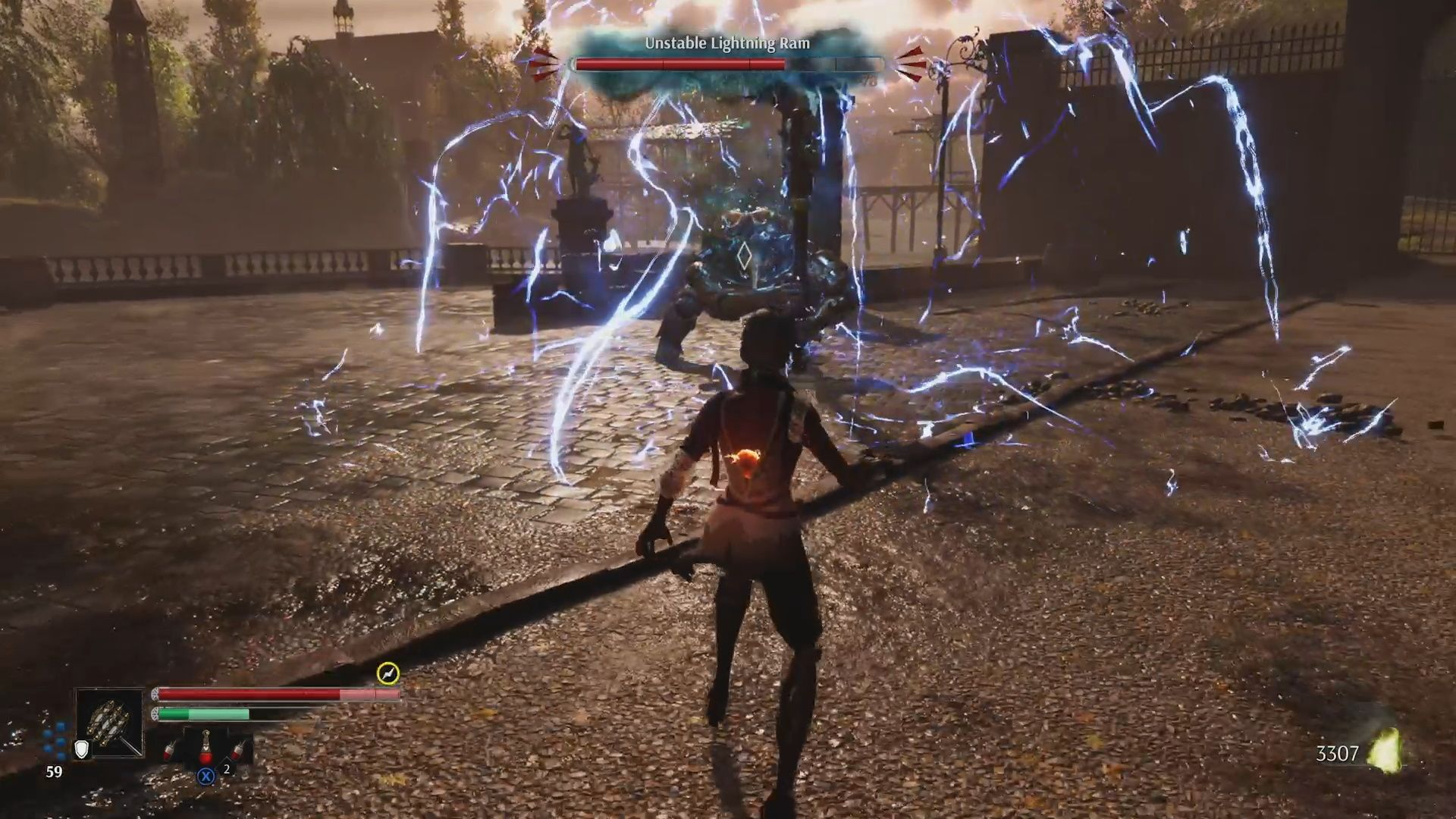 Most of their ram attacks will whiff as long as you circle them, allowing you to attack from behind. Of course, this won't work for that wide-swinging combo, but once again, that move is very, very telegraphed, so just prepare to dodge when you see the Unstable Lightning Ram winds up a big-ass swing. Lastly, when you see him jump up into the air, dash away. 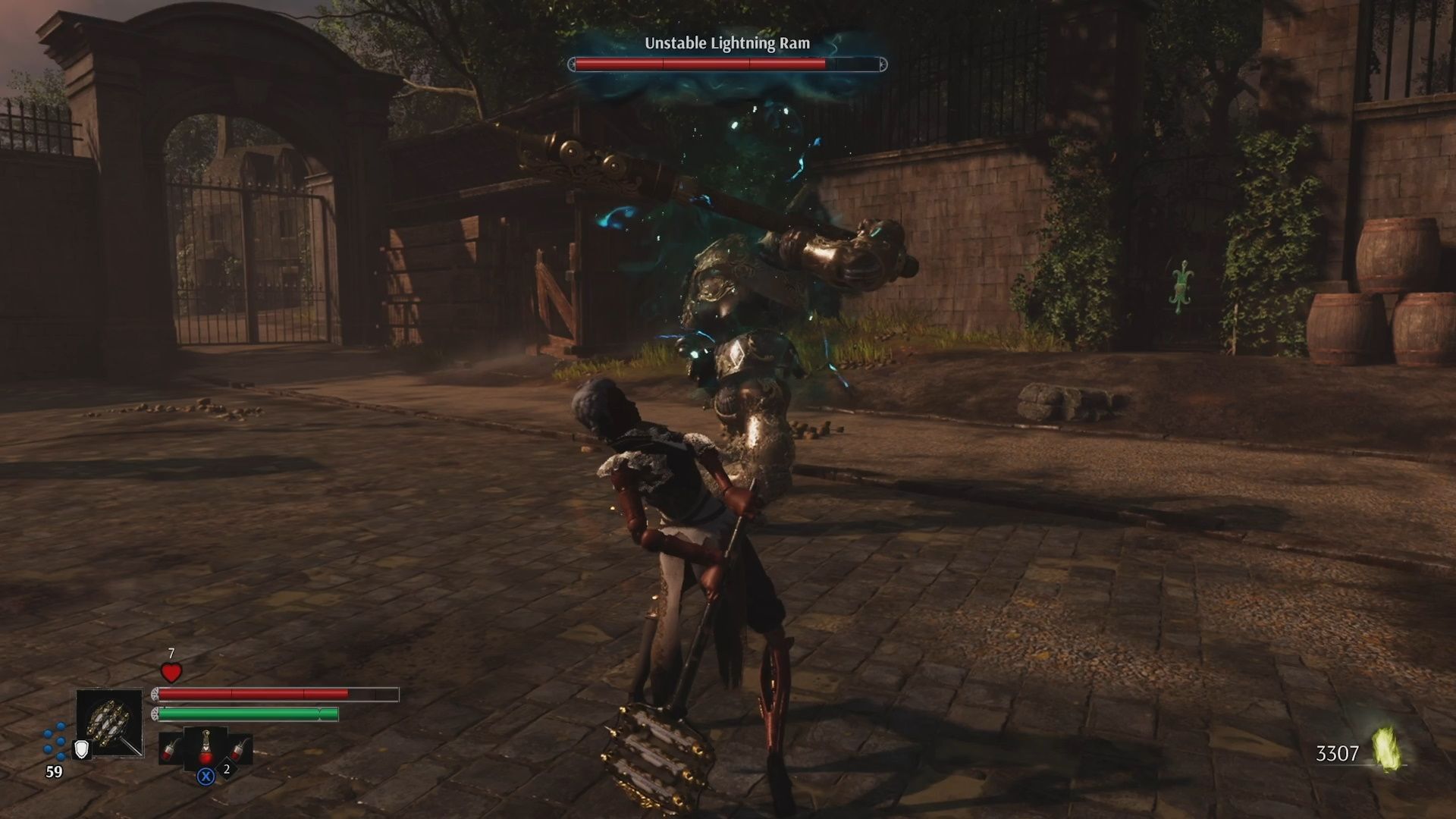 Speaking of that lightning attack; when the Unstable Lightning Ram lands and generates that electrical field, it is the perfect opportunity to charge your attack if you are using a Halberd (if you get the range right, you will be able to land a fully charged attack the second the electricity has dissipated). Or, if you are using any of the other weapons, you can shoot the Unstable Lightning Ram while they are locked into this attack.

Circling, dodging the big swings, and attacking the back is definitely an engaging method for beating this boss, but what about the good ol' cheese?

The Quickest And Easiest Way To Kill The Unstable Lightning Ram 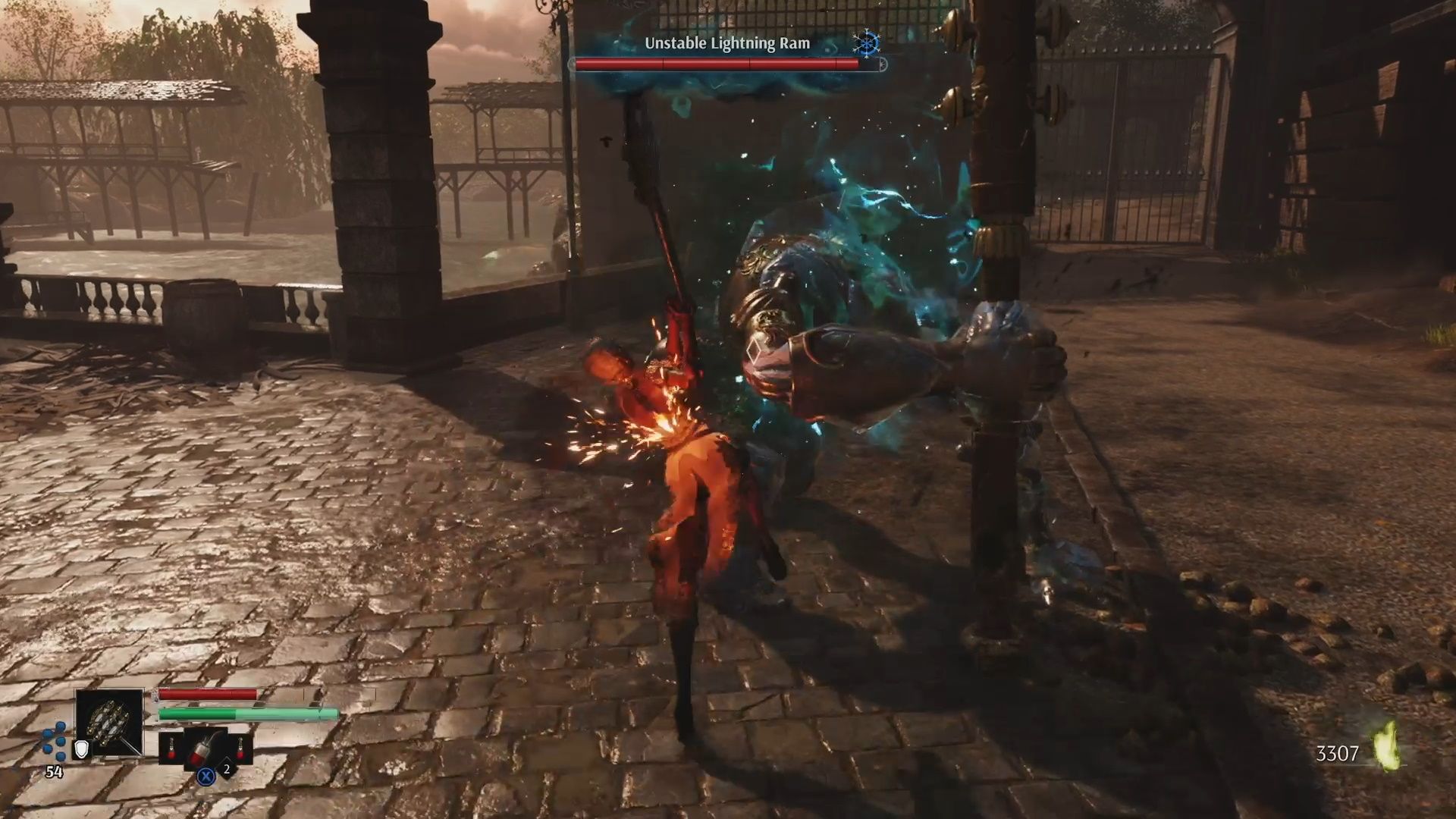 *sigh* Equip your Shield Musket in the alternative weapon slot, shoot the Unstable Lightning Ram to freeze them, then when they are frozen, switch back to your primary weapon and fully charge your attack. After landing a fully charged attack, the Unstable Lightning Ram will be staggered, so land a second fully charged attack. Now, go back to freezing the huge Automat with your Shield Musket. Rinse and repeat until it is dead. You monster.

Your reward will be the Grade 2 Stable Charging Module as well as a Module Key. Once you have finished the boss off, make sure to break the barrels and boxes in the boss arena, there are a bunch of goodies hidden inside them (nothing too major, just a lost soul and some bombs).